It has been five months since the last installment of my Eurotrip journal (and two years since the trip actually happened), but we are finally hitting the home stretch with this penultimate chapter covering my one full day in Amsterdam.

July 12, 2014: My first morning in Amsterdam began with breakfast at the hotel, where I enjoyed American-style bacon for the first time on this two-week trip (bacon in the U.K. is more like ham). I chose to skip my tour group’s morning excursion to Zaanse Schans since we had not had the opportunity on the previous day to see much of Amsterdam. From what I’ve read, Zaanse Schans sounds a bit like a tourist trap anyway, so although it would have been neat to see the old windmills, I don’t feel as if I missed much overall.

Instead, I preferred to spend my only full day in Amsterdam exploring the city, so I began the long walk toward the city center from my hotel, which was located far outside the main part of the city. When I later spoke to other members of my group, they were stunned that I had walked all the way to the city center and back again–one guy said a taxi had cost him 26 Euros each way. But, as I’ve learned from my travel-savvy uncle as well as through my own experience, a long walk is the best way to truly experience a city.

Along the way, I meandered through areas with hardly any tourists and stumbled onto a large outdoor market where I was able to buy an authentic stroopwaffle. I also diverted my route to swing by an old windmill in town, so I didn’t leave Amsterdam without seeing at least one classic windmill. Between these diversions and numerous photo stops, it took me about two hours to reach the city center.

Here are some photos from my walk: 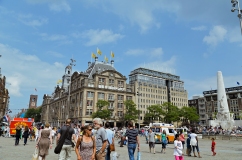 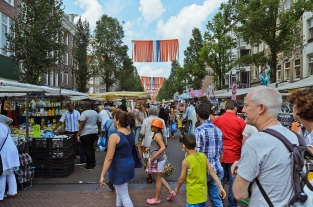 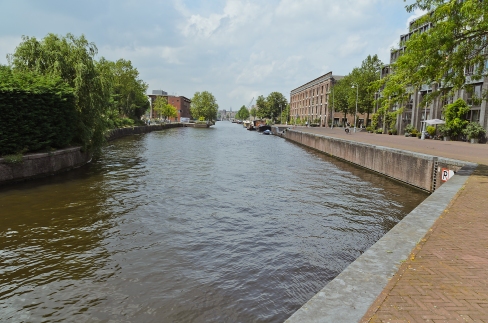 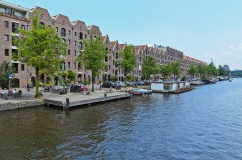 The walk back to the hotel took much longer than expected. For some reason, although I normally have a very good sense of direction, I kept getting turned around and walking in circles. Eventually, I found my way out of the circular city center and on the road back home. I kept looking for somewhere to eat dinner but nothing was striking my fancy, and before I knew it, I was back at the hotel.

I had been walking basically nonstop for five straight hours over hard surfaces on a hot summer day, so I was pretty beat and not feeling up to heading back out to look for somewhere to eat, especially since the hotel wasn’t really located near anything. So I settled for eating in the hotel, which turned out to be one of the worst meals I’ve ever had: a chorizo sandwich with such a thin slice of meat that it was basically like eating bread, and a bland appetizer platter which came out with raw ground sausage. I took a little bite just to make sure my eyes weren’t deceiving me, but it was indeed raw. Perhaps it is a delicacy there, but I couldn’t bring myself to eat it.

I then headed back to my room to pack, thus ending my time in Amsterdam. When I had first seen the city via cruise on the previous day, I hadn’t been overwhelmed, but it grew more charming during my long walk off the beaten path and into the old city center, then less charming when I reached the red light district. In the end, I was glad to have visited once, as it is a very unique city with its various canals, waterfront buildings, and heavy bike traffic (as well as some other amenities you don’t find in other cities), but I was already looking forward to the next day’s visit to Bruges, which, for me, had been the main attraction of this entire tour. Unfortunately, my time in Bruges would be mostly ill-fated, but that’s a story for the next installment.

View more of my photos from Amsterdam and Bruges.