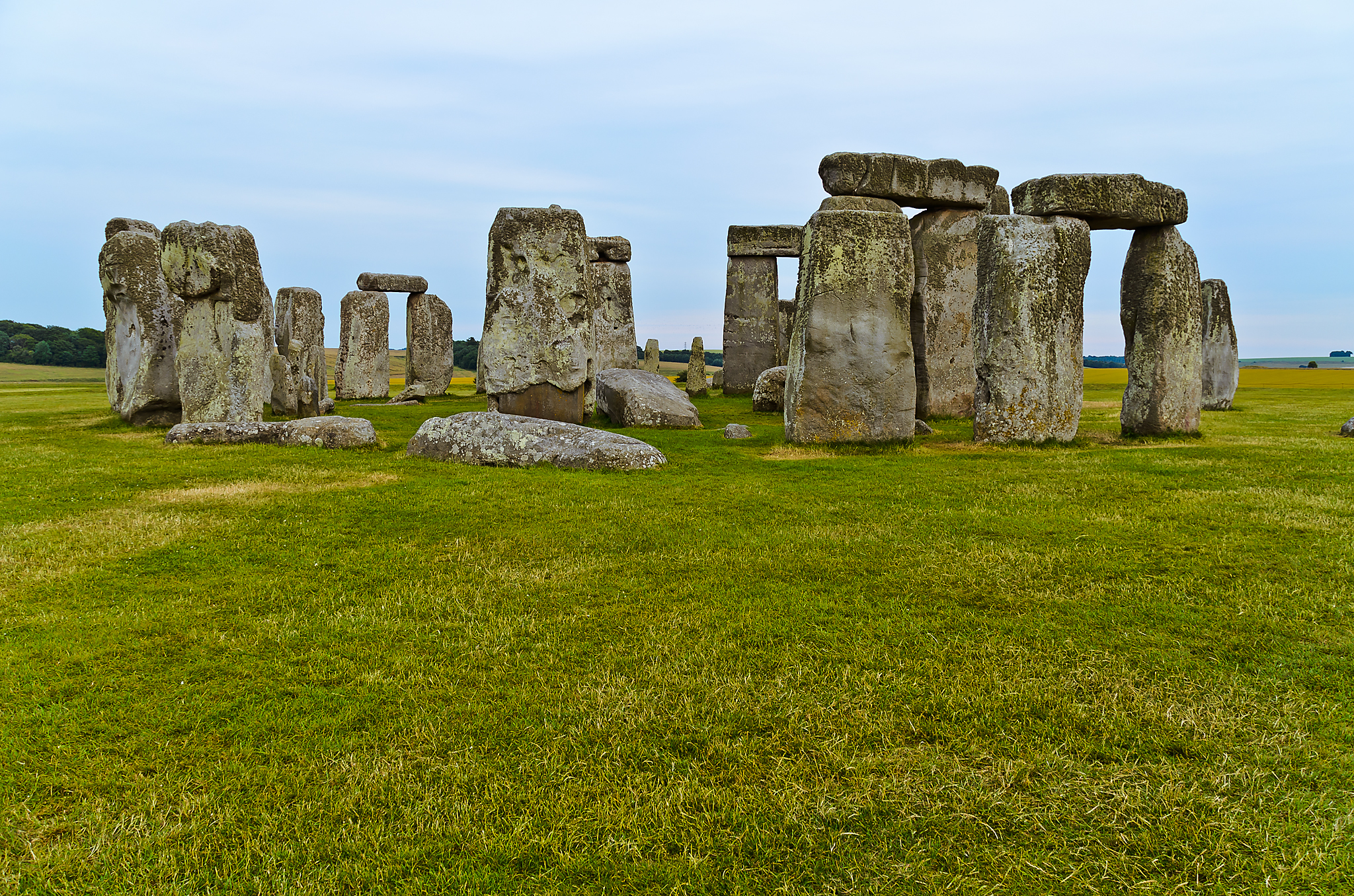 July 2, 2014: After spending a couple of days in London and a day in Paris, it was finally time to explore some of the English countryside via a tour of Bath and Stonehenge. This was my second of several tours booked through Premium Tours, and would turn out to be the best one by far. I can’t recommend this tour highly enough. Just make sure you choose the option in which you see Stonehenge in a private viewing at sunset—I think this option is only available during the summer, and only on certain days, but it is so worth it. Whereas the public must view Stonehenge from behind ropes at a distance, this tour gives you access inside the ropes to walk among the stones. But I’m getting ahead of myself.

The day began with a trip on the subway to the Marble Arch, where I would be meeting with my guide and waiting for the bus to pick us up. While waiting I snapped a photo of the arch. You can click on any photo in this post to view a larger version. 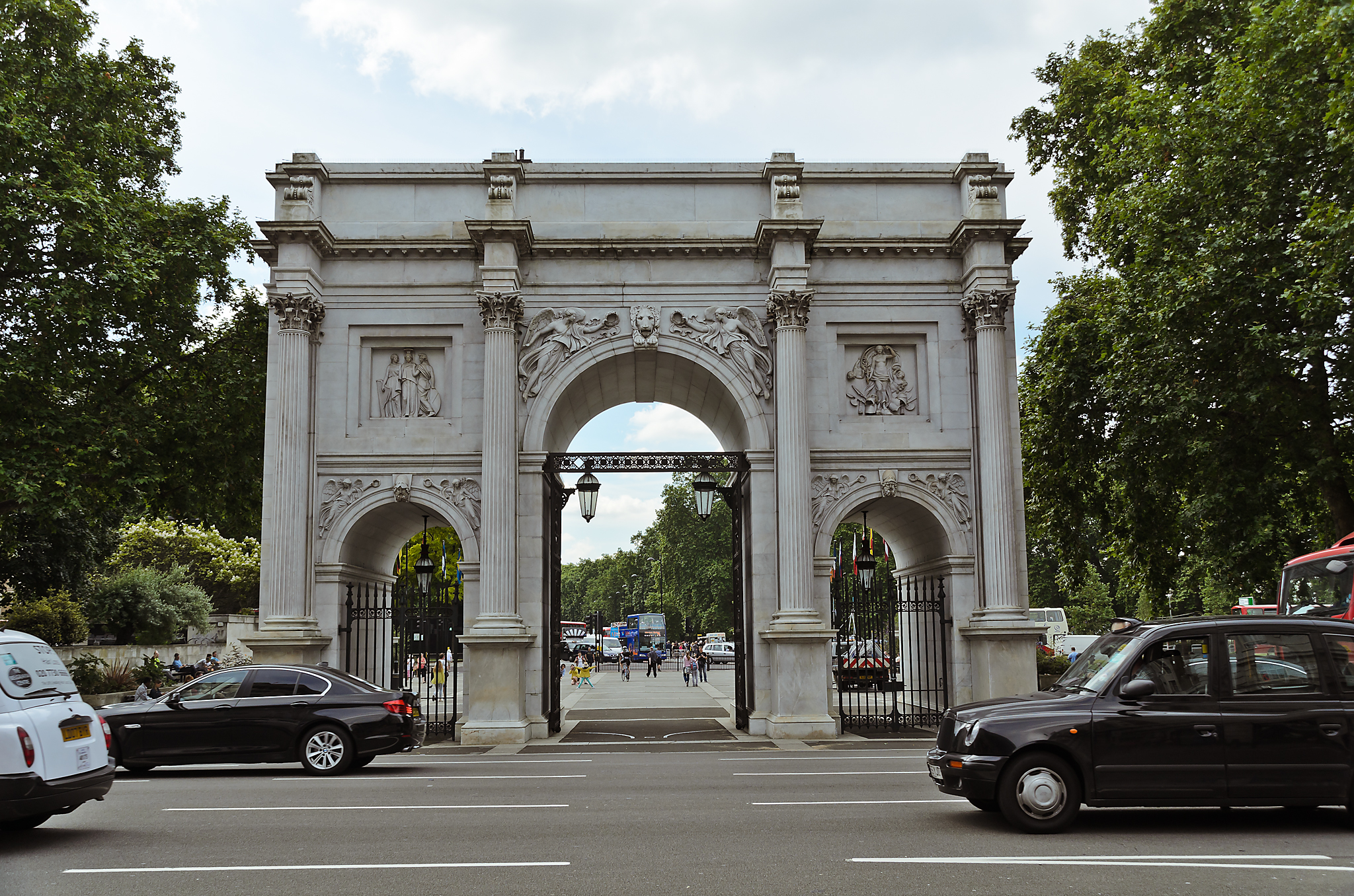 The guide was a cheeky older fellow with a biting wit named David. In his welcoming speech to the group he told us that the company basically gets two types of reviews from people on his tours: those who loved him and those who hated him. I fell firmly on the former side, finding his humor quite entertaining, and a welcome change from the by-the-book guides you frequently encounter on these tours. I can see how some easily-offended people might not like him, but in my opinion he made an already great trip even more enjoyable.

Our first stop was the very charming city of Bath. On the way I snapped a couple of photos of the countryside from the bus. 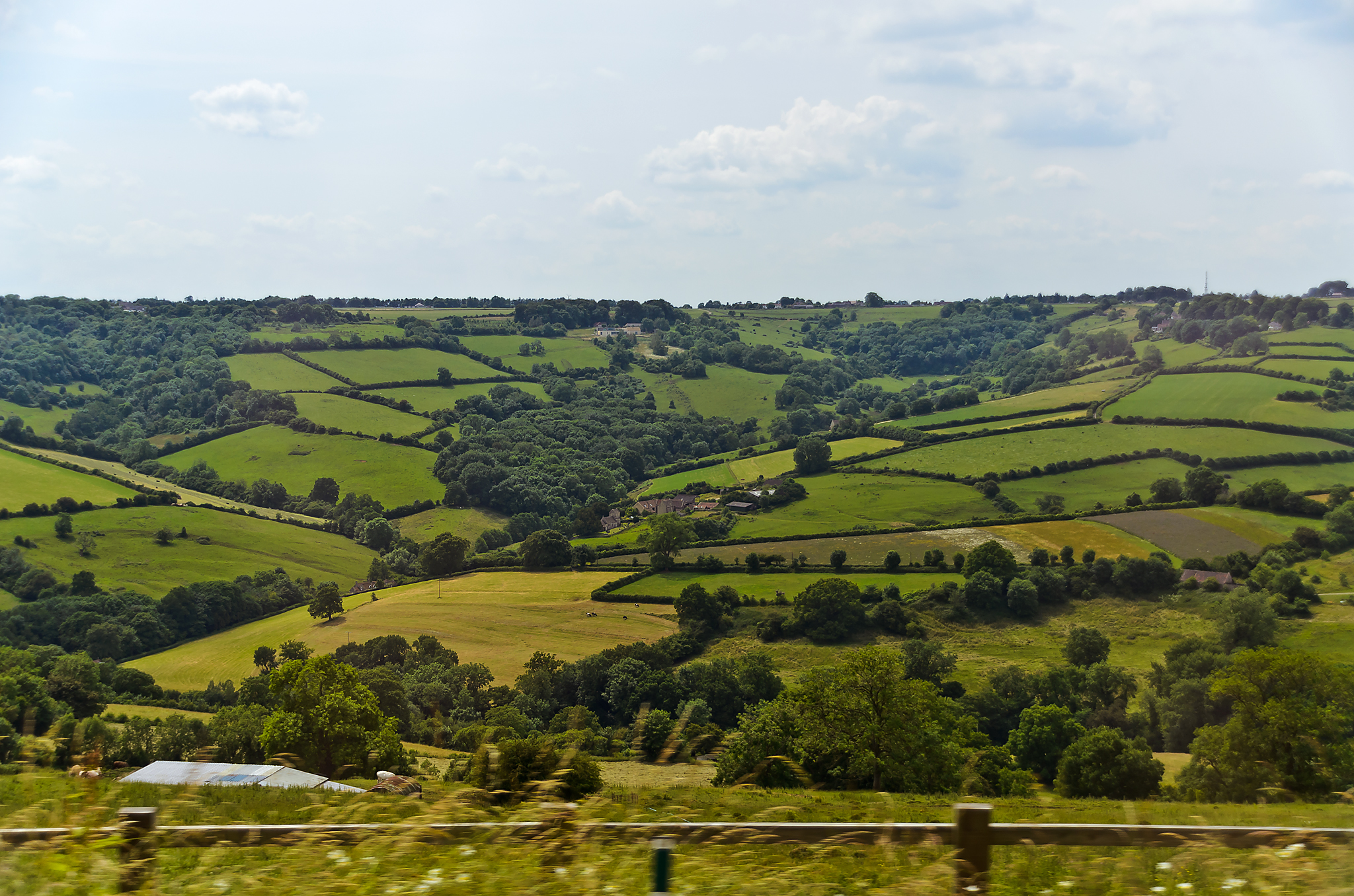 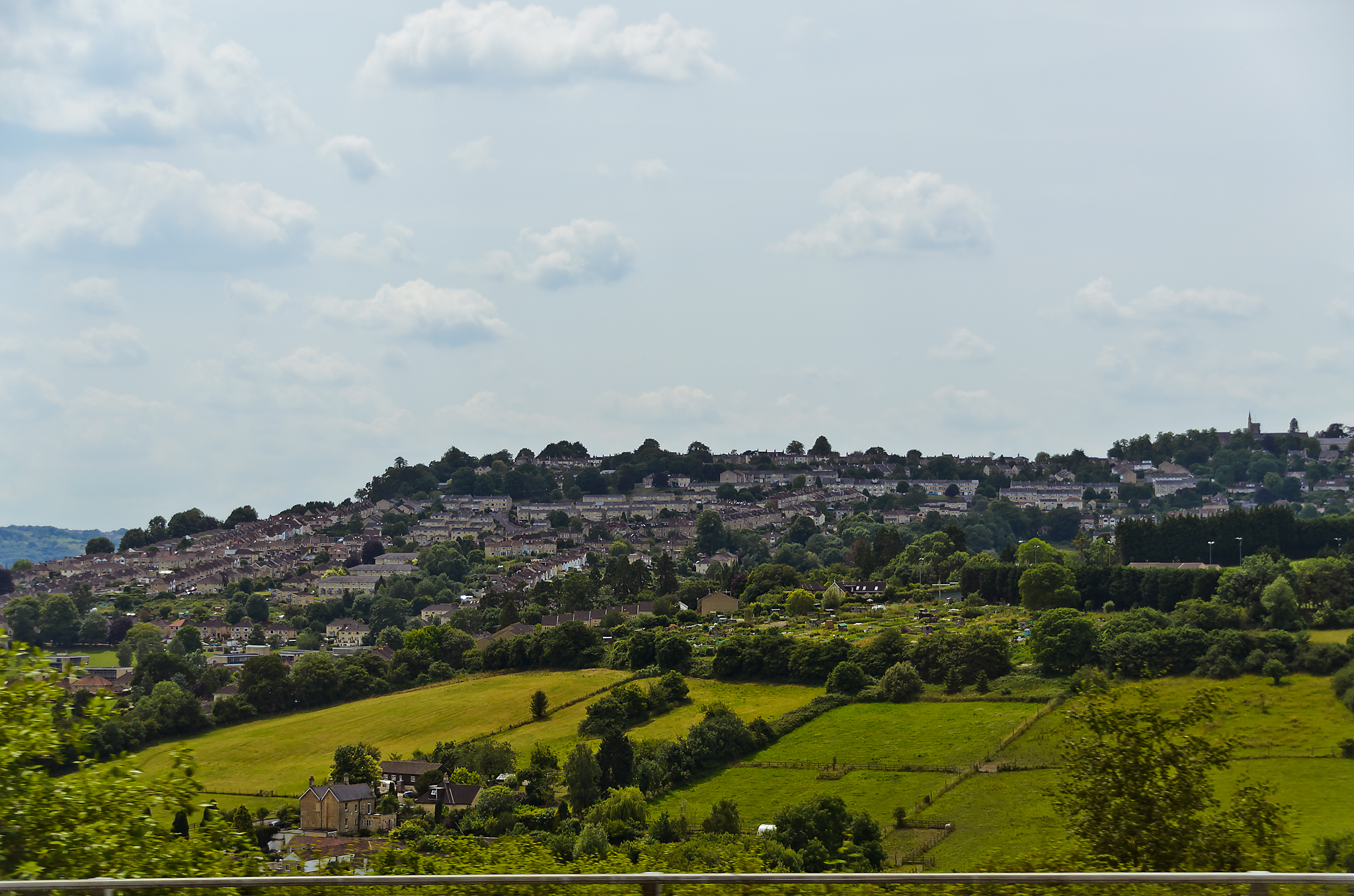 A town in the distance.

The main attraction in Bath is the ruin of the Roman Baths, but the entire city is rich with character. It’s easy to understand why so many celebrities have homes here. We only had a few hours (most of which were spent in the Baths), but you could easily spend an entire day or more meandering through this majestic city.

While waiting in line to get into the Roman Baths, I befriended a couple who were on the tour with me after I overheard them talking about Monty Python—it turns out I wasn’t the only one to organize an entire trip to the U.K. around the Python reunion concert. We bonded over that (they were going to the show the day before mine) and also over Treme (the HBO show) and our mutual love of Trombone Shorty—they were from New Orleans and had seen Shorty perform before he was famous. I’m usually alone on these trips and too shy to strike up conversations, so this was a nice change of pace for me. 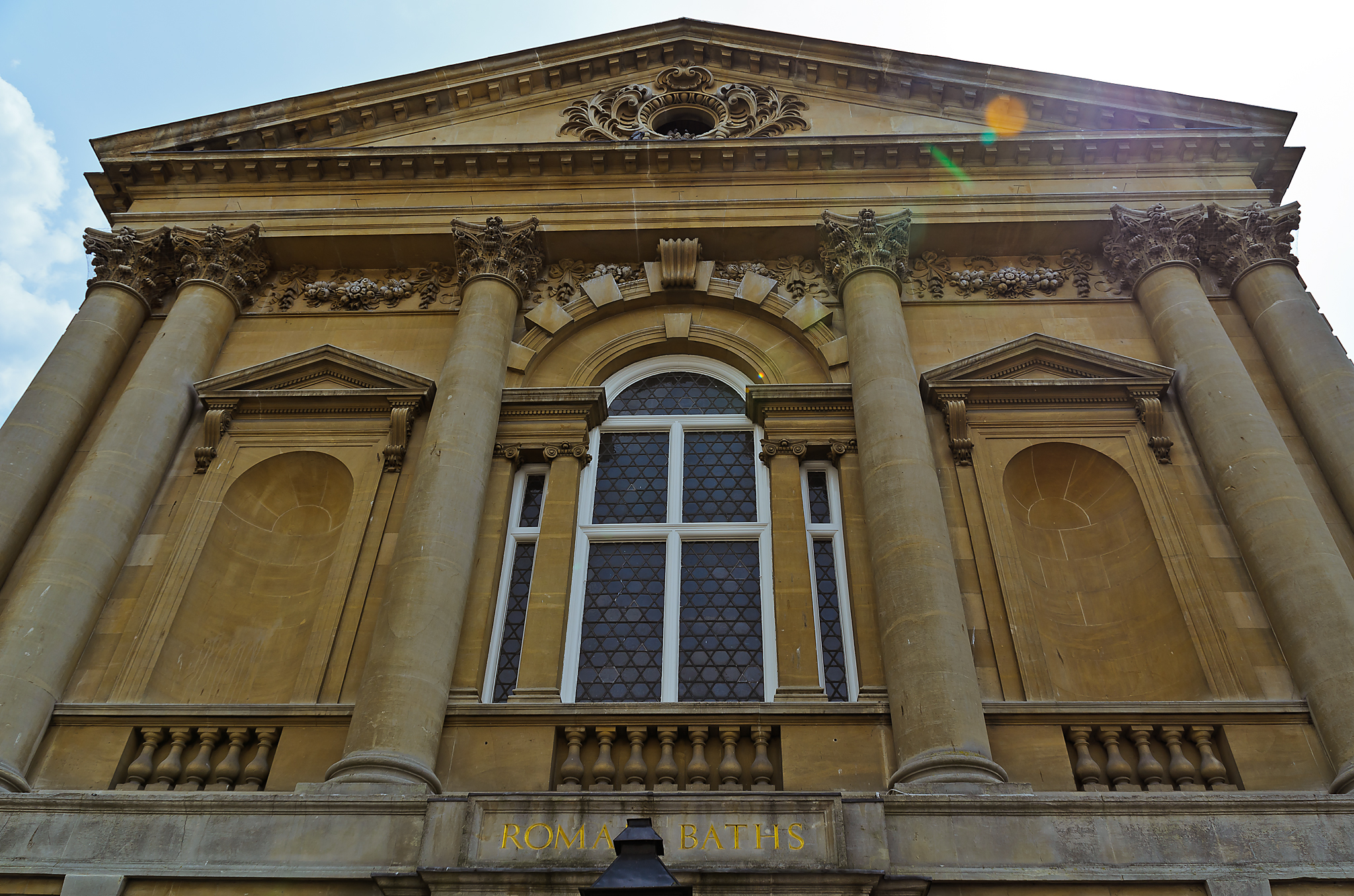 Outside the Roman Baths

Before long it was time to enter the Baths. I’ve always been fascinated with ruins, especially those of the Roman Empire, so I was very much looking forward to this. 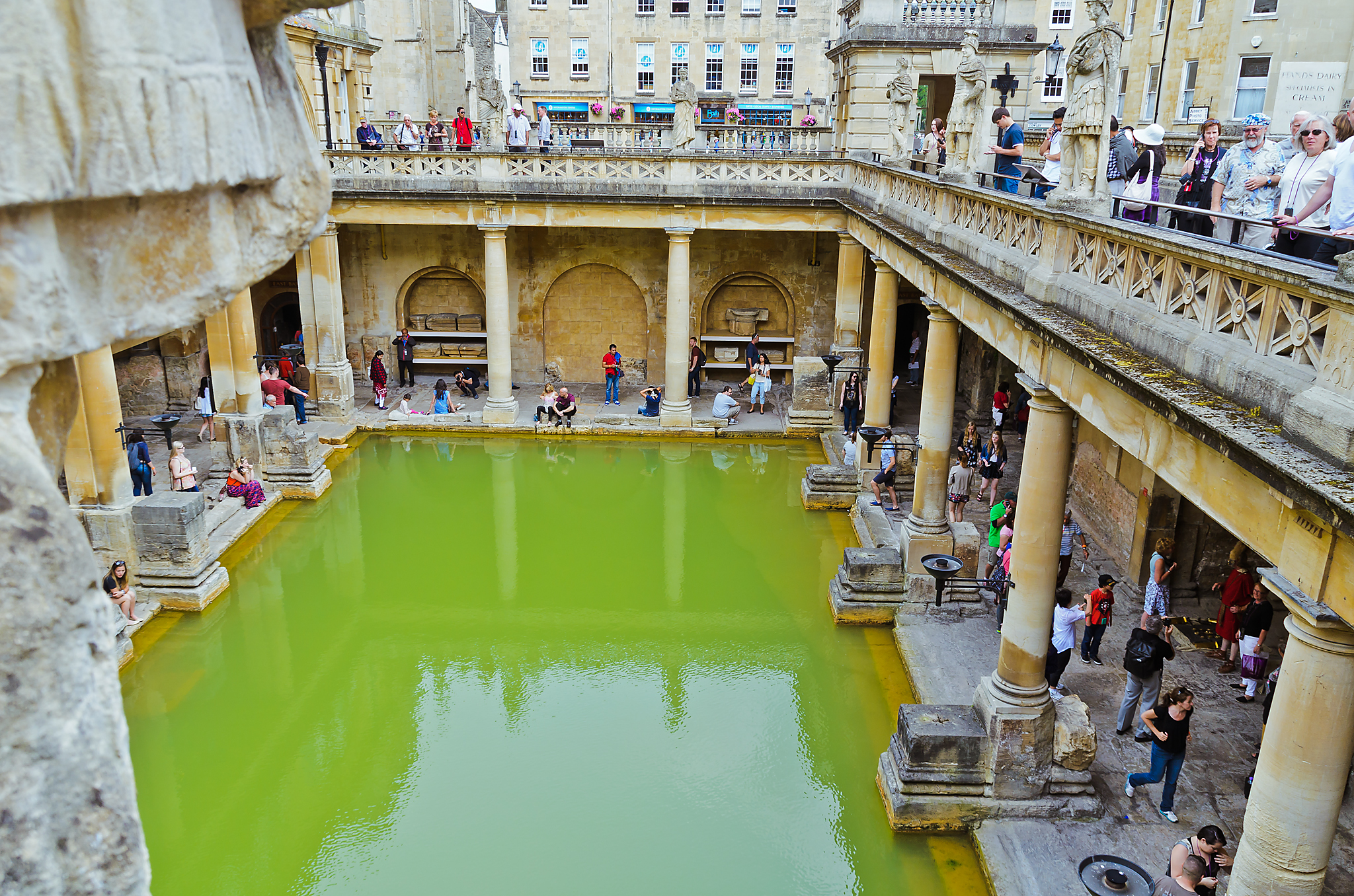 The main bath viewed from the upper level. 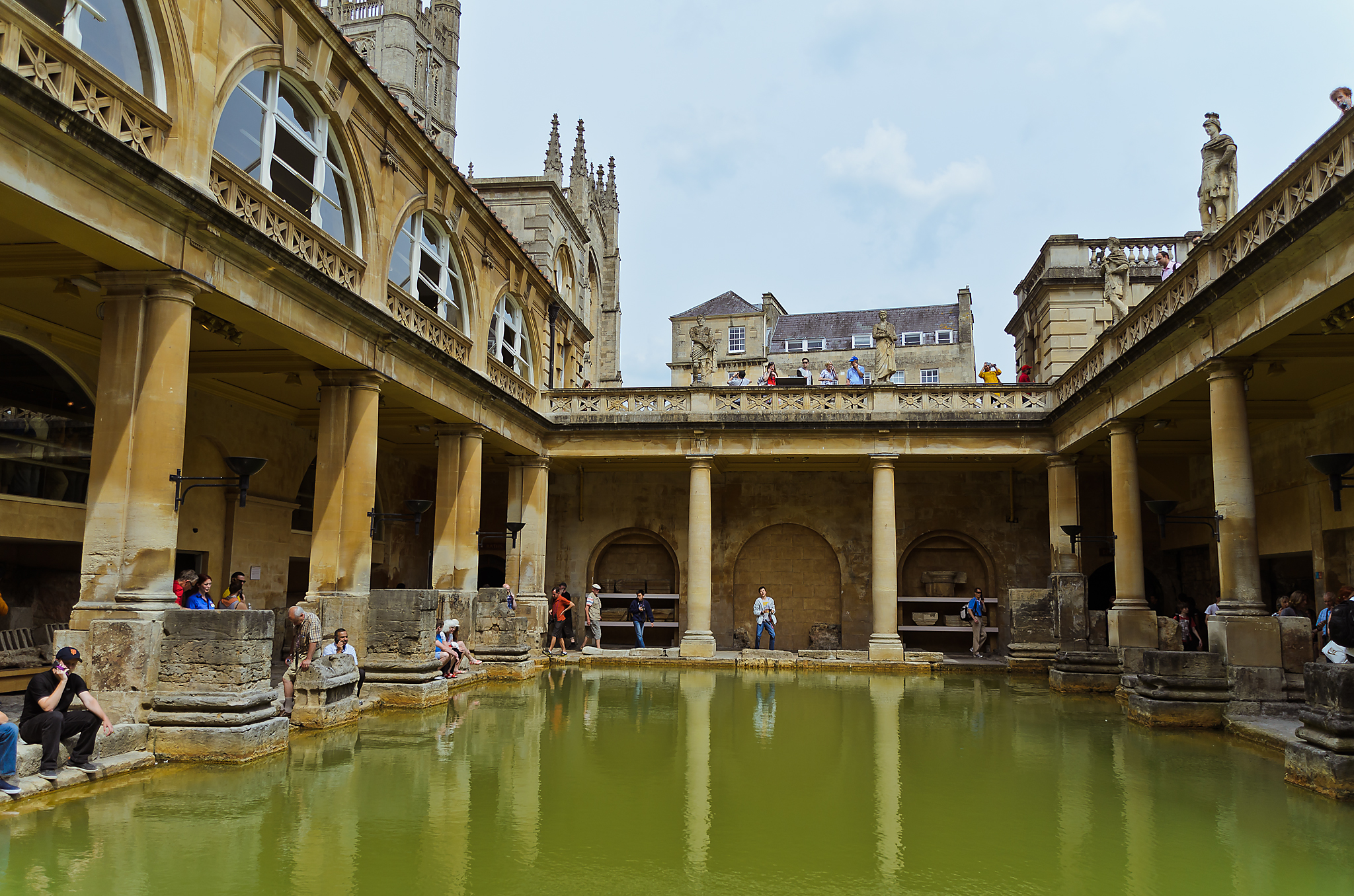 The main bath viewed from the lower level. 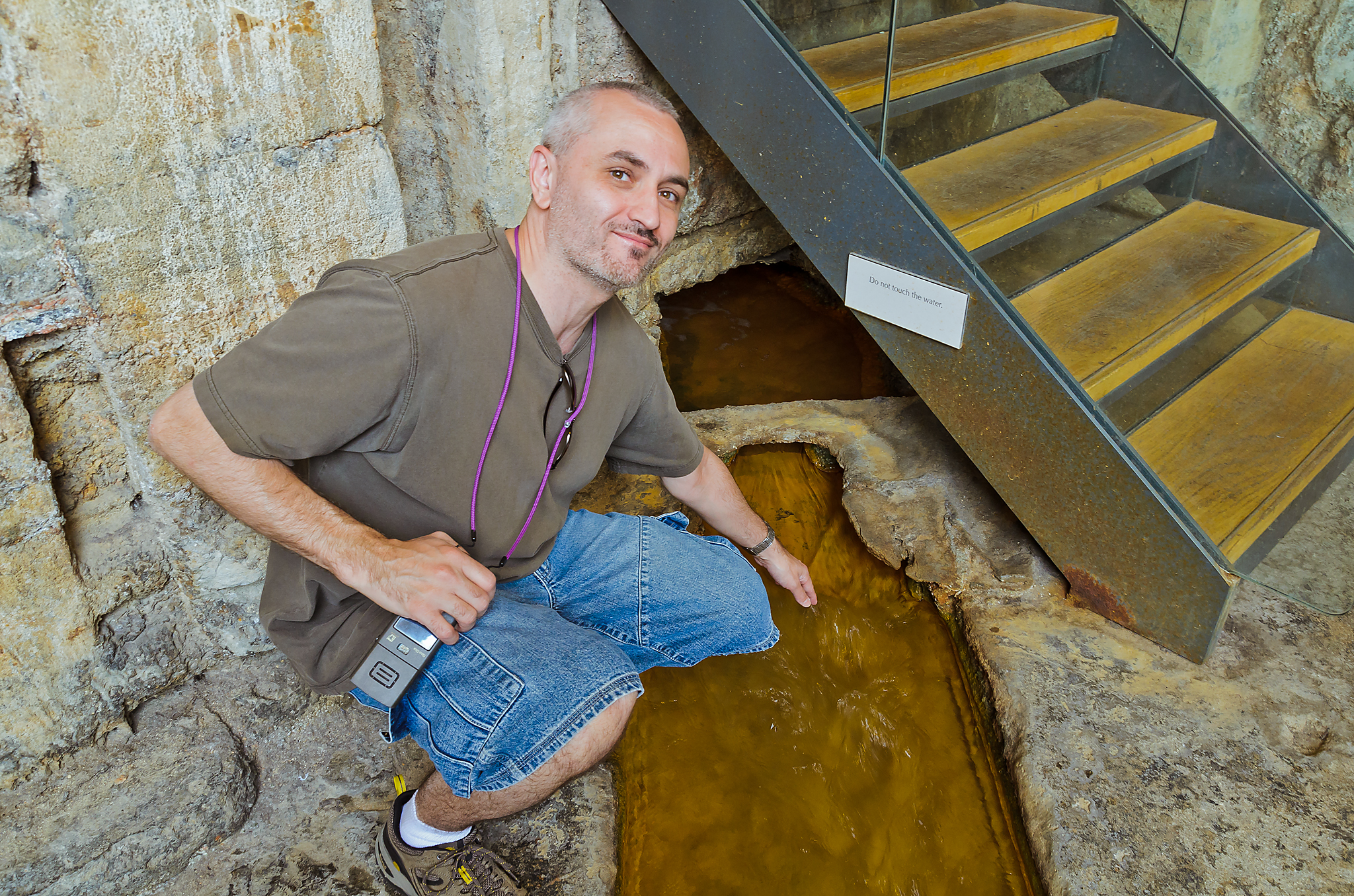 Our guide David talked me into taking this photo in front of the “do not touch the water” sign. 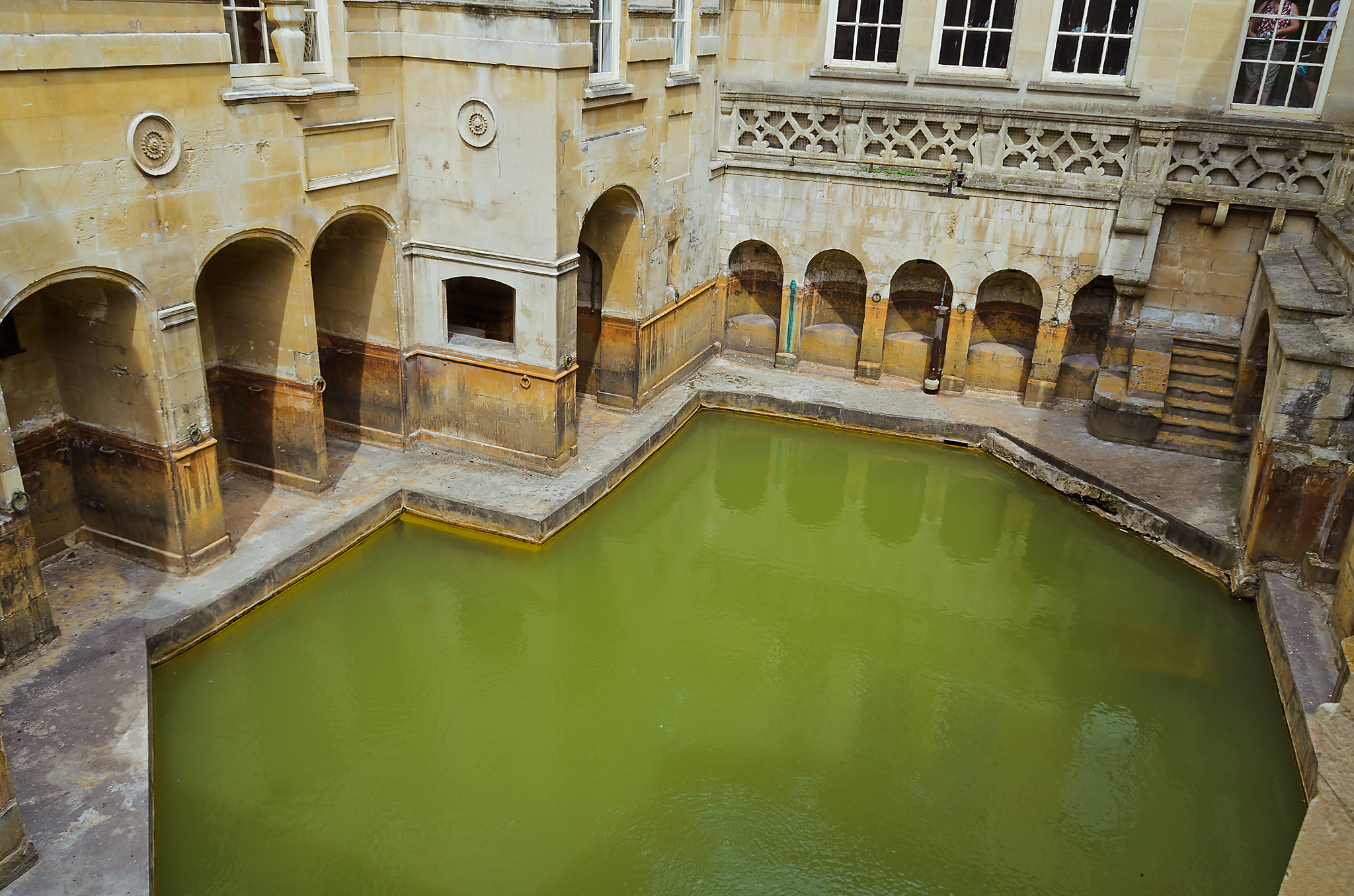 The smaller bath. The water once rose as high as the dark area just below the tops of the arches.

After exiting the Baths I had free time to walk around the city. It was a beautiful day to enjoy a beautiful city (finally, a day without rain). Here are some photos from my walk around town. You can click on any collage photo on this page to open up a gallery.

I only wish I had longer to spend in Bath, but it was time to move on. Our next stop was an old Saxon village called Lacock. On the way I snapped a couple more photos from the bus. 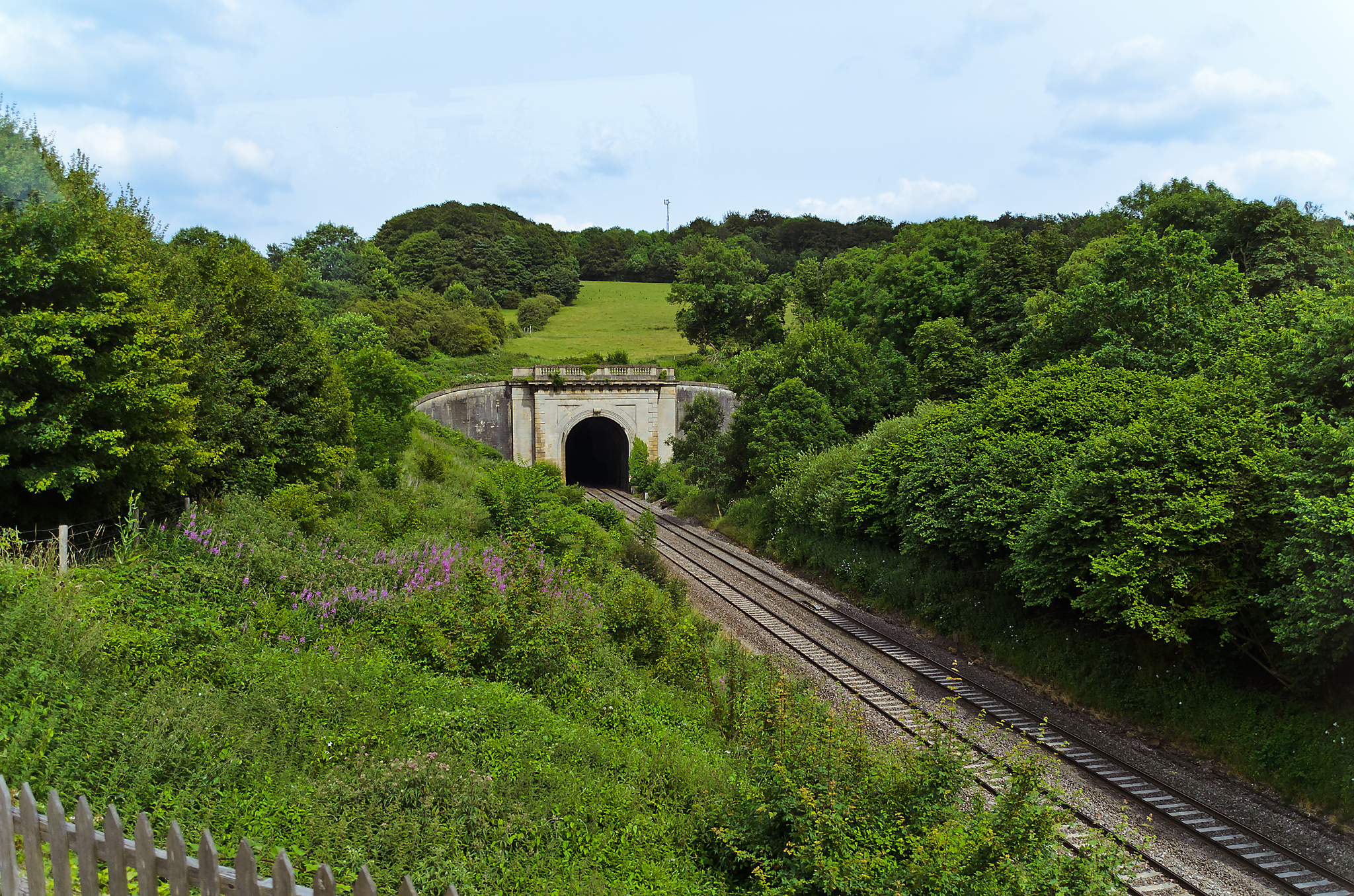 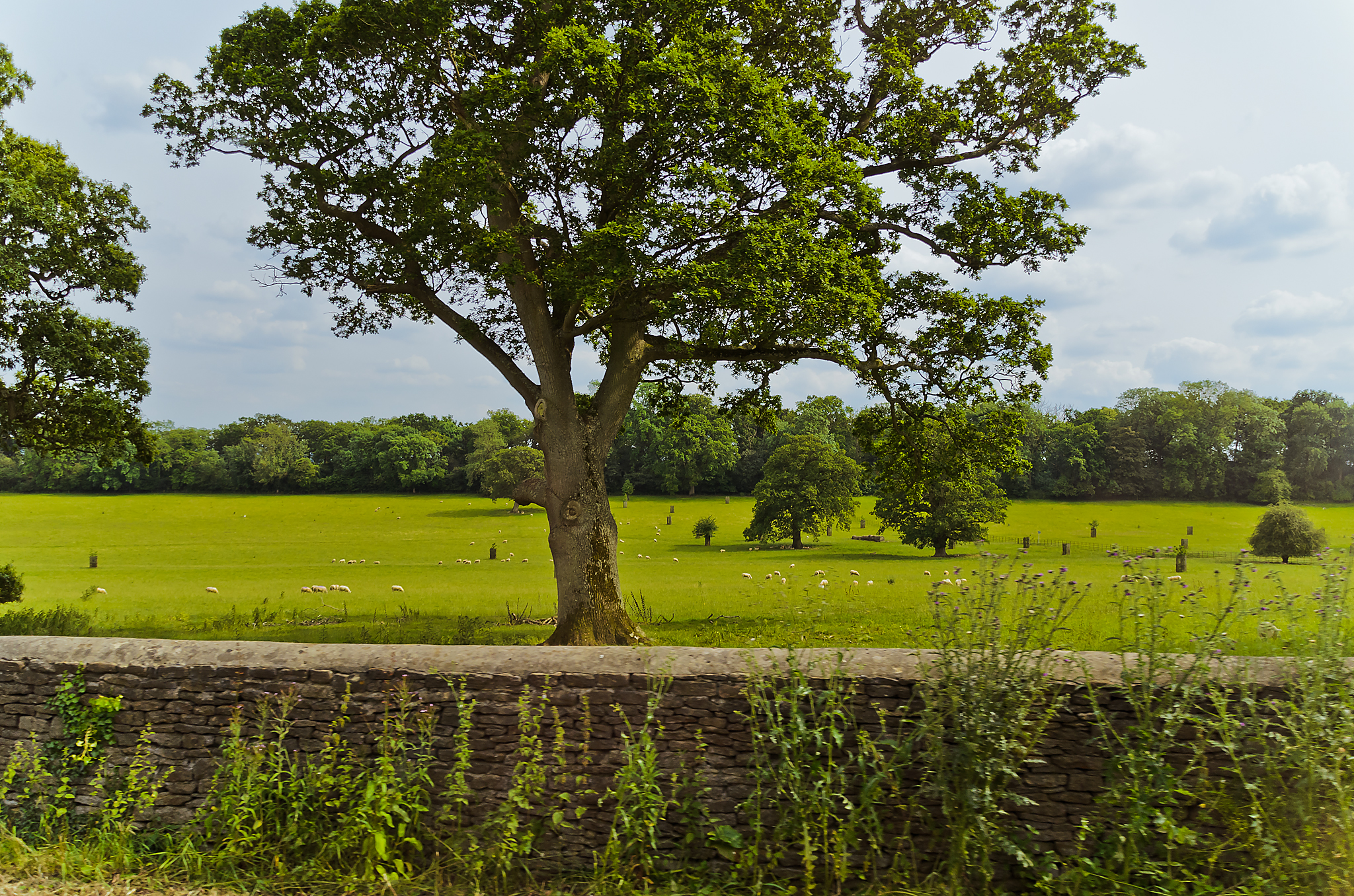 Lacock, with its quaint buildings, is like a walk back in time. We had lunch reservations at a 14th-century inn called The George. 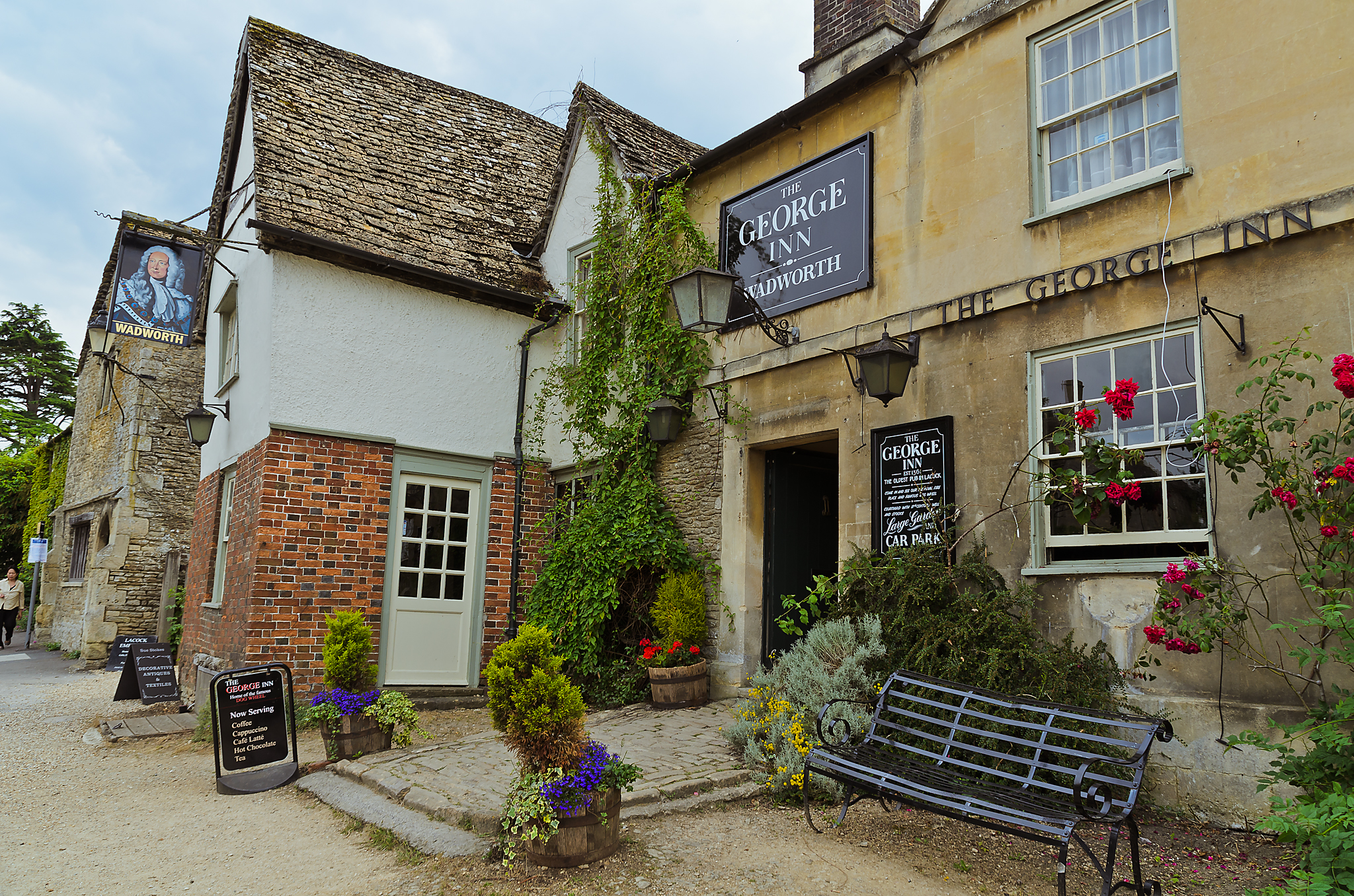 I can’t recall exactly what I ate (some sort of meat pie) but it was delicious and fresh (we had placed our orders earlier that morning to give them time to make the food from scratch), washed down with some home-brewed ale, and followed by a tasty dessert. This was my first proper English meal of the trip—and the most inexpensive by far.

Some Harry Potter interior scenes were filmed in this abbey.

This house appeared in The Half Blood Prince.

The tiles of this roof are made of stone and supposedly have not needed replacing in hundreds of years.

Before long it was time to kick this trip up to eleven (as Nigel Tufnel might say) and hop back on the bus for our ultimate destination: Stonehenge. They no longer allow cars to park at Stonehenge itself (which is a good thing), so you must park at the welcome center, from where a shuttle takes you up to the site. While waiting for the shuttle I walked around the museum, which had lots of useful information about the history of Stonehenge.

Finally, the park closed to the general public and it was time to catch the shuttle for our private viewing. On the way to the site I managed to snap one heavily-zoomed photo of two of the many barrows (burial mounds) found in the surrounding area. 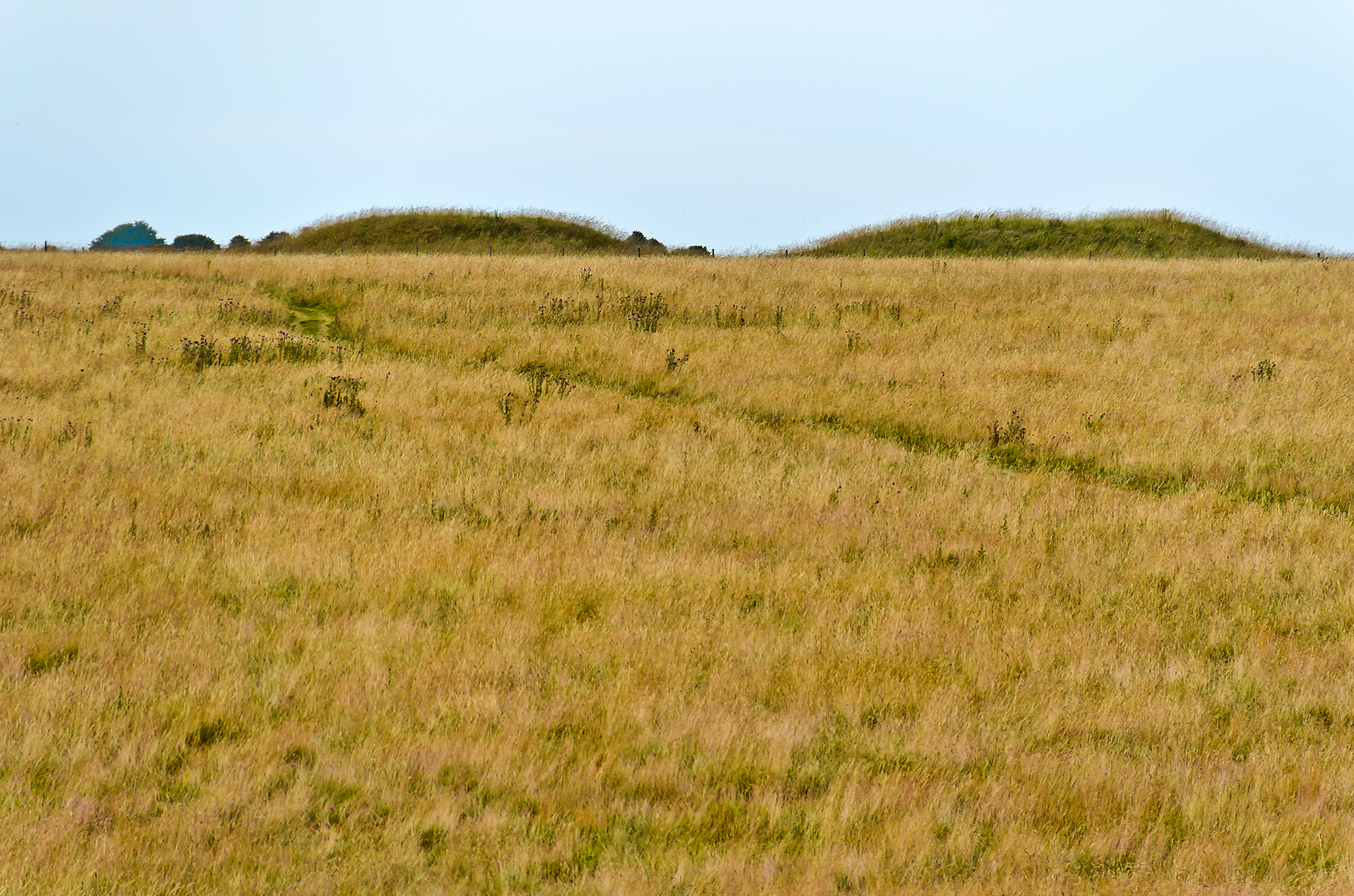 Then we made our approach to Stonehenge. It’s impossible to put into words the feeling of standing on this ancient site, and photos fail to do it justice, but here are a few.

The stones are roped off to the public so most people never get much closer than where I’m standing in this photo. 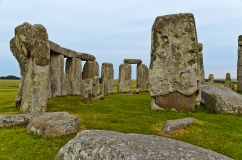 Having the entire place to ourselves was amazing, especially as the setting sun bathed the sky in pretty hues that made for some great photos. At one point our guide David had us be quiet and just soak in the atmosphere. I don’t necessarily subscribe to the idea of a place like this giving off vibes, but standing there in silence among those massive stones was definitely goosebump-inducing.

Soon it was time to hop back on the bus and return to London. By the time I reached my apartment it was 11:30 p.m and I had been on the road for over 13 hours, but it was more than worth it. As I mentioned at the top, this was the best of all the tours I booked through Premium Tours, as well as the best day I spent in England during my entire two-week stay. And on that note, I leave you with one final photo of the sun setting over Stonehenge. 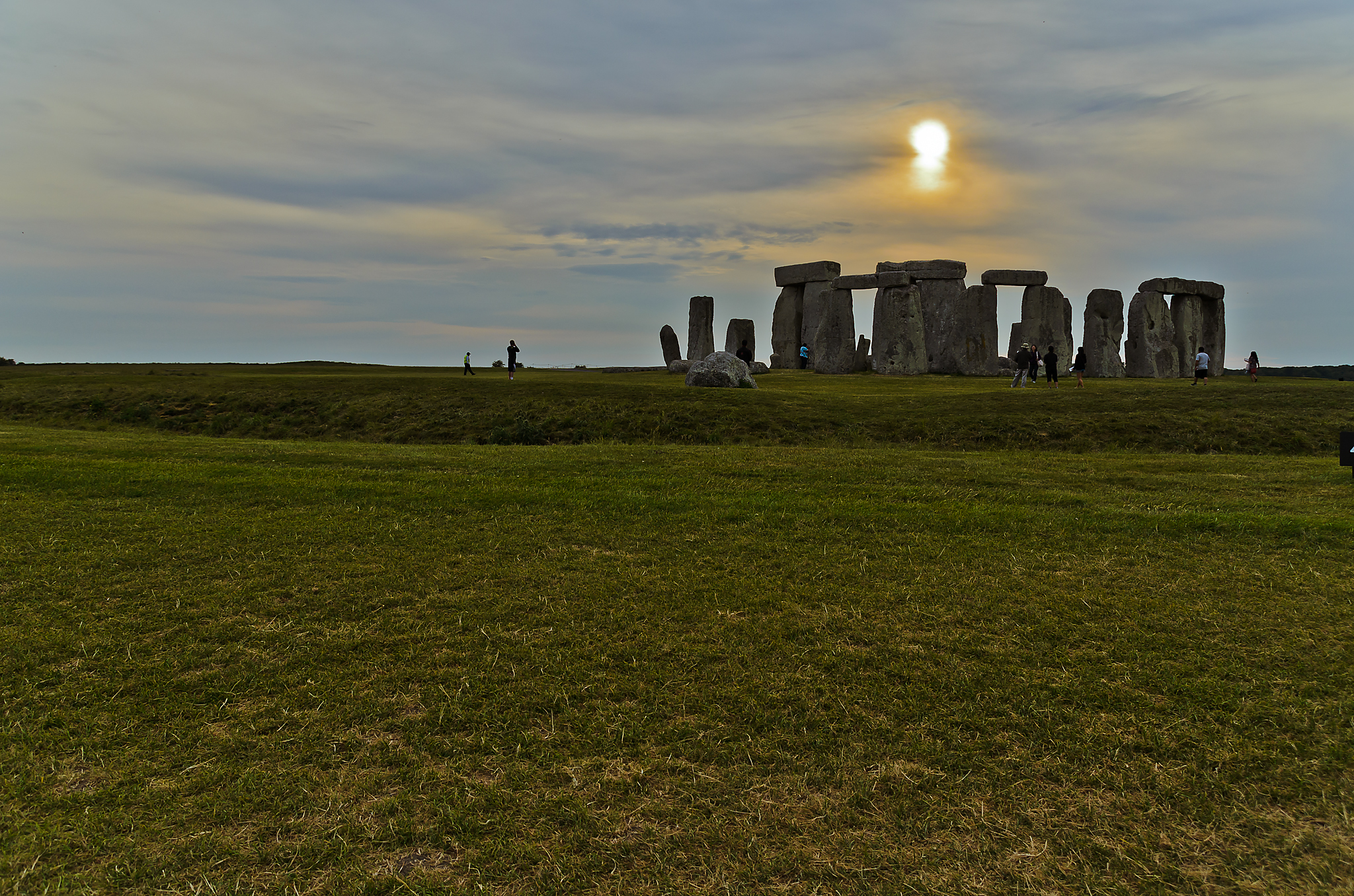 View more photos from my visits to the English countryside.