July 1, 2014: The phone in my London flat roused me at 4 a.m.—my wakeup call. What am I, nuts? Who gets up this early on vacation? Someone who wants to spend a day in Paris, that’s who. So I dragged myself out of bed and got ready for my walk to St. Pancras train station, where I would be meeting my tour group for a 6:00 check-in. With only 1.5 hours of sleep under my belt, it was going to be a LONG day, but I knew that it would be worth it. After all, how many times in your life do you get a chance to see Paris?

I met with my group and then went through a security check-in process that was very similar to what you experience in an airport. I hadn’t been expecting that—during my 2011 trip I rode trains all over Europe without going through any type of pre-boarding security. I guess security needs to be tighter when you’re taking a train that goes through a tunnel beneath the English Channel.

Soon I was on the train and we were headed to France. I tried to catch some sleep while we were in the tunnel, but was unsuccessful. Eventually we arrived in Paris and we met up with our guide, who was waiting for us at the end of the train platform. This was the first of several tours I had booked through Premium Tours. There were several tour options for the Paris day trip, both guided and unguided. I chose the most expensive one as it was the only option that included access to the Eiffel Tower. This package also included a two-course lunch with champagne at a restaurant on the Tower itself.

But first we hopped on a bus for a driving tour of the city. Here are some photos from the bus. I did my best to minimize window glare (you can click on any photo in this post to open up a gallery).

After our tour, the bus dropped us near the Eiffel Tower. Our guide warned us not to engage with anyone who might approach with a clipboard asking us to take a survey because it is a scam—while the survey taker distracts you, his or her partner picks your pocket. Sure enough, we had barely departed the bus when a girl approached with a clipboard. One of the men in the group forcefully told her “no” and she didn’t bother any of the rest of us.

The line to get into the Tower was huge. Thankfully, as a tour group, we didn’t have to wait as long as the general public, but it was still a good wait. We eventually made it to the front, through security (they check your backpack), and up the elevator to the restaurant. The restaurant is on a lower level of the Tower, giving you a good view of the city, though our table was not near a window. The food was good, though not overly memorable.

It was at this point that I realized our tickets did not include elevator access to the observation deck of the tower. If we wanted to reach the observation deck we would either have climb the stairs or go back down and purchase a lift ticket. I would have been fine with climbing, but we only had about 30 minutes between lunch and the time we were supposed to meet at the dock for our boat cruise, so there wasn’t enough time to climb up and get back down again, nor was there enough time go down and to wait in line for a lift ticket. Had I known this, I would have skipped lunch and just spent the time climbing to the observation deck. I initially thought that I might still have a shot to get up there, so I skipped dessert and headed out, but soon realized after climbing a few flights that I would never make it. As a result, I was only able to take a few photos from the stairs through a chain-link fence, which did not allow for any wide shots since I had to zoom in enough to get past the links. 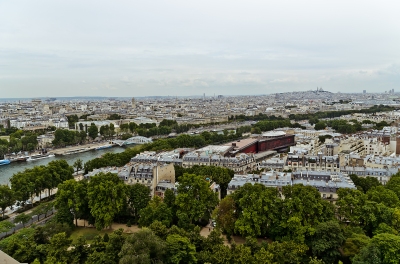 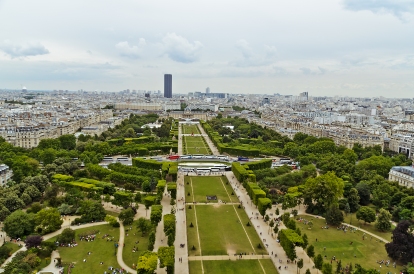 With the time I had left, I headed back down to the ground and took a walk around the nearby area so that I could get some shots of the Tower from below. 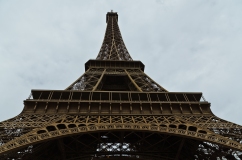 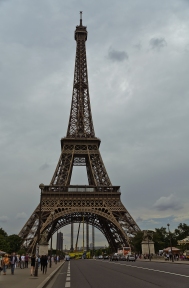 Before long it was time to head down to the dock and meet back up with the group for our cruise along the majestic Seine. I hadn’t realized that the London rain had been following me to Paris—it had just taken a while to catch up. By the time we boarded the boat my old friend had arrived, but luckily the rain wasn’t heavy enough to prevent me from taking photos. With gorgeous architecture on both banks, a Seine cruise is highly recommended. 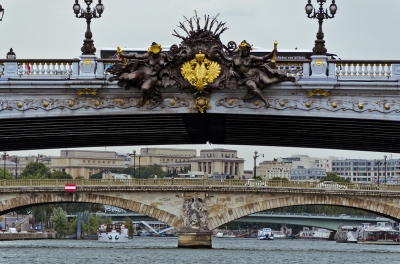 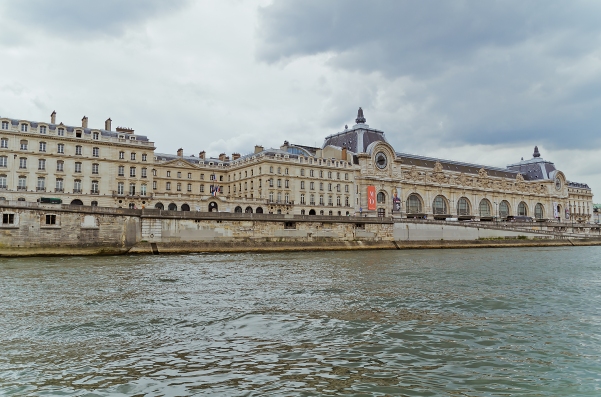 There was a group of school children on the boat with us and the girls screamed at the tops of their lungs every time the boat went under a bridge, creating an ear-piercing echo-chamber effect. Under different circumstances I might have been annoyed, but this was Paris and it actually added to the atmosphere. Many of the bridges we passed beneath had locks on them, so it turns out there’s more than one Love Lock Bridge, though it was easy to tell which bridge was the original because it was completely covered in a blanket of locks.

At the end of the boat trip we hopped back on our tour bus and headed to The Louvre. Upon arrival the guide released us for free time. We had the option of touring the museum but I decided to meander outside among the impressive grounds (especially since the sun had finally made an appearance) rather than spend all of my remaining time jockeying with crowds for a glimpse of the Mona Lisa. I wouldn’t mind seeing it someday when I have more time to spend in Paris. 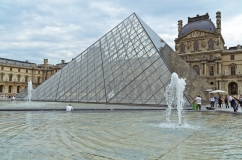 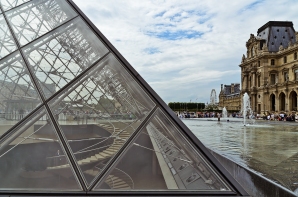 After snapping some photos in the main plaza I made my way to the Louvre gardens.

I could see the Arc de Triomphe in the distance but did not have time to walk all the way there, so I settled for admiring it from afar. At this point I thought it prudent to eat some dinner since I knew I would not have the opportunity by the time we got back to London later that night. Time dwindled as I searched for a place to eat, and I didn’t want to run the risk of missing the bus, so I settled for a tea house in the Louvre itself. After a bit of trouble communicating with the waiter (I usually try to pick up some of the language of the country I am visiting, but since I was only spending one day in Paris and three days in Amsterdam/Bruges, I concentrated instead on learning some Dutch for this trip), I ordered afternoon tea, which came with finger sandwiches and desserts. That’s right, my first ever afternoon tea was in France, not England. 🙂

I gobbled down the food, drank my tea, and rejoined my group in the nick of time. Before long I was back on the train and bound for London. Once again I was unable to sleep on the way home, so by the time I returned to my apartment around 9 p.m., I was ready to collapse. I had another long day ahead of me in the morning: a trip to Bath and Stonehenge, but thankfully I didn’t have to wake up for that trip until around 7:30, so I had some extra time to catch up on sleep.

Overall, I would say the tour is worth it, though there is bound to be some disappointment given the time constraints of a day trip (like, for example, not being able to see the city at night). For me, the biggest disappointment was not having the opportunity to go to the observation deck of the Eiffel Tower. If I had a suggestion to make to Premium Tours, it would be to provide a version of the tour that skips lunch on the tower and instead provides you with tickets all the way to the top. Other than that, it was a nice tour with an excellent guide, and a perfect way to get a taste of Paris. Clearly, a day trip can only scratch the surface of this amazing city, and if I ever make it back, it will be for much longer, but considering that I was coming all the way from London, I was able to see much more in one day than I would have on my own. So if you have only one day to spend in Paris and are traveling from London, this tour is definitely a good option.

View more of my photos from Paris.