November 3, 2013: After a long day of driving from Merida to Cancun, with a visit to Chichen Itza in between, I finally checked into my hotel around 8 p.m. on a rainy evening. The hotel was one of those all-inclusive joints that are always trying to sell you a time share or vacation club or whatever they call it. I discovered just how aggressive they can be before I even made it to the elevator with my suitcase when I was intercepted by one of their marketing people. Really? Could I at least unpack before you start harassing me? I was tired and not in a sales-pitch kind of mood, so I just kind of played dumb until she let me go.

Moments later, I finally arrived in my room. I’m not picky about hotel rooms (when you do most of your traveling with a dog, you learn to take what you can get), but I was surprised by the cheap-motel feel of the room, like a leftover relic from the 50’s or 60’s, with concrete walls painted lime green. No mini-bar, which I guess is understandable in an all-inclusive place, but I missed the ability to keep my water cool (the broken ice machine on the floor didn’t help matters). There was also no free WiFi and you had to pay if you wanted to use the in-room safe (so much for all-inclusive). Minor quibbles, but I would have expected more considering how much you pay to stay in one of these resorts.

On the other hand, I had a great view of both the ocean and the bay from my window, which I was looking forward to seeing in the daylight.

In the meantime, I ventured downstairs for dinner and then outside to take a nighttime stroll. The rain had let up so I decided to take a walk up to the nearby Mayan ruin. I had the entire ruin to myself; it was so peaceful overlooking the ocean. I could have stayed there all night.

I headed back to my room and went to bed. Since I had gotten very little sleep over the long week, I decided I would sleep in the following morning so I would be rejuvenated for the rest of my stay. That idea, however, was quashed when someone from the marketing staff called me at 7 a.m. to ask me if I was going on their trip to Chichen Itza. I had just come from Chichen Itza the night before, why would I want to go back? I tried to go back to sleep, but a half-hour later someone else called to ask if I was coming to their breakfast presentation. Umm, no! I was really irritated now (I guess I should have unplugged the phone).

There was no going back to sleep now, so I got ready and then headed downstairs, sought out the first marketing person I could find, and told her I was not interested in anything they had to sell and to please make sure nobody called my room again. I’m normally not that assertive but I didn’t want to spend the rest of my brief stay dodging sales pitches. Anyway, it worked; no salesperson called me again for the rest of my stay; they just resorted to slipping things under my door.

So if you’re considering staying in one of these all-inclusive places, just know what you’re in for. It’s not the kind of place in which I would have chosen to stay if it hadn’t been a part of my tour package. While the all-inclusive aspect has its appeal (especially the unlimited mixed drinks I was able to order), it’s not really my cup of tea. I would rather not be married to eating all of my meals at the hotel buffet (which you almost feel obligated to do given that you already paid for it), and the whole Dirty-Dancing-Catskills-resort atmosphere with the scheduled events and activities doesn’t really appeal to me. It seems designed to keep you in or near the hotel for your entire stay, or to use the hotel for any excursions.

Cancun in general strikes me as a vacation destination for Americans who don’t like to travel, as it’s essentially an American resort that happens to exist in Mexico. You don’t have to learn the language or customs or venture outside of your comfort zone because you’re shielded in this self-contained luxury cocoon. There’s nothing wrong with that if that’s what you’re looking for, but for my part, when I want to spend a week at the beach I can just drive to the Jersey shore.

That being said, the beaches and waters of Cancun are stunningly beautiful. The turquoise Caribbean was like nothing I had ever seen before, and the white sand was incredibly soft and powdery, not coarse like the beaches back home. I was so taken by the comfort of the sand and the beauty of the water that I was inspired to go swimming in the ocean, which is something I almost never do at the Jersey shore.

After swimming I spent some more time on the beach and then took another walk up to the Mayan ruin to see it in daylight.

I then headed to the hotel pool, which has a bar that serves drinks while you sit on a bar stool in the pool, and enjoyed some Mai Tais. So yes, despite my protestations, I did make good use of the all-inclusive package. 🙂

I also scheduled an excursion for the following day called Jungle Tour that involved driving your own motor boat through a lagoon and mangroves and out to sea to go snorkeling on the Great Mayan Reef, which is said to be the largest reef in the Western Hemisphere. I had never been snorkeling before, so I was looking forward to it. The rest of the evening was spent checking out a nearby outdoor mall and stopping by the hotel’s “Pirate Party” on the beach, which was basically a glorified high school dance, so I left quickly.

The next day I headed out for my snorkeling excursion. I had trouble figuring out where to pick up the bus that would take me to the tour operator and almost wound up being late, but I eventually made it. I decided to buy a disposable underwater camera in their shop and then I was off to change, pick up my gear, and report to the dock.

We each had our own boats to drive as we headed out to the reef, which took about a half-hour. Once there, after some instruction, we jumped in. I stayed with the beginners, though I think I would have been okay following the experienced snorkelers. Despite the overcast sky, the view underwater was amazing, and nothing can prepare you for the first time a large fish appears out of nowhere to swim right in front of your face. Startling, but also exhilarating.

The underwater camera turned out to be a waste because most of the pictures did not come out, and the ones that did are not of very good quality. In fact, this is the only underwater shot that was even remotely worth sharing: 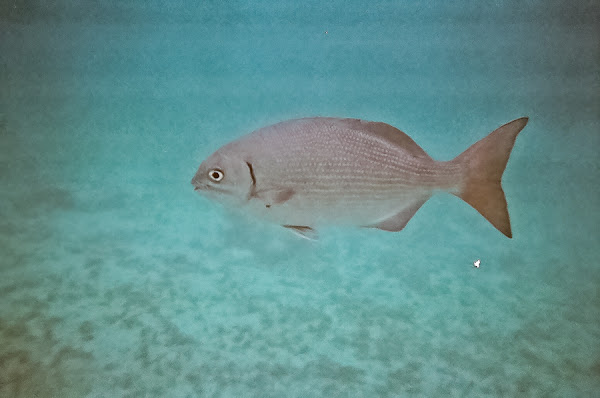 As a novice snorkeler, I kept making the mistake of turning my head to the point where the snorkel became submerged, causing me to swallow seawater. The ocean was rough as well, which led to a bout of motion sickness (I should have taken Dramamine or something). On top of that, the life vest kept scraping against my underarms until my skin was raw (next time I’ll have to wear something to prevent that). So I wound up returning to my boat about ten minutes early, with a headache and the world spinning around me. Despite all of that, it was still an amazing experience and definitely something I want to do again. I’ll be better prepared for it next time.

That evening, for my final dinner of the trip, I decided to forego the buffet and make a reservation at the hotel’s fancy Italian restaurant. It was part of the all-inclusive package, which meant unlimited glasses of prosecco. The lasagna was just okay, but the antipasto and dessert buffets were great, especially the cannolis filled with chocolate mousse.

After dinner I headed upstairs to pack for my flight. I asked for an 8 a.m. wake-up call the next morning only to have the front desk call me at 7:30 to let me know when my airport transfer would be arriving—they were just determined not to let me sleep. :-

The shuttle was late because the driver had to switch vehicles after the AC broke on the first vehicle, but he eventually came and I made it to the airport with time to spare. I was a bit annoyed that I had to wait in line with the rest of the people checking their baggage when I only had a carry-on, but it was nice to go through a security checkpoint that doesn’t make you take your shoes off. Before long I was on the plane and headed back to Jersey. The flight home was very comfortable—I had sprung the extra $49 for premium economy seats and nobody else was sitting in them, so I basically had two entire rows on both sides of the plane to myself, which enabled me to get some nice sunset views like these, captured with my cell phone camera: 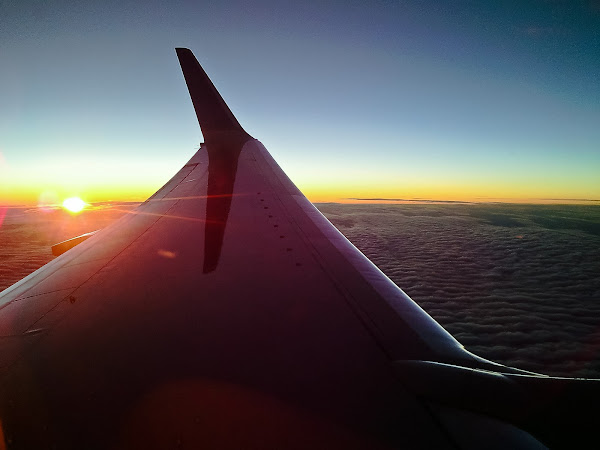 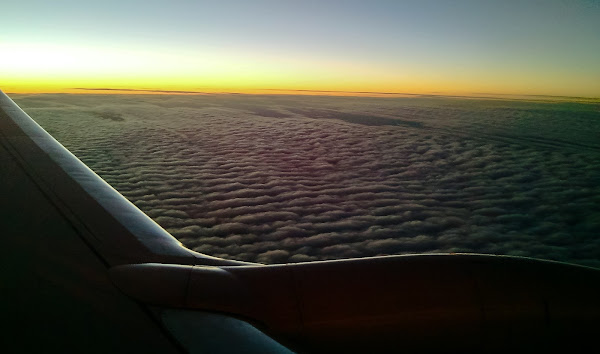 Before signing off, a quick word about the tour company I used, Tour By Mexico. I tried to do as much research as possible before my trip, but there was not a whole lot of info about them online in terms of reviews, so I took a bit of a gamble in booking with them. It paid off. They were very professional and organized, answered all of my questions before the trip, showed up promptly for all of my transfer pickups (save the Cancun pickup mentioned above), and they quickly resolved the issue I had with my Mexico City hotel. I would recommend them if you are looking for an organized tour in Mexico, and the Pyramid Tour in particular was a great way to visit many of Mexico’s more famous pyramid sites within the span of a week.

Well, that’s it for my Mexico journal. Before long I’ll be writing about my U.K. trip. Until then, I leave you with my Mexico trip video:

3 thoughts on “Down in Mexico, Days 6 to 9: Swimming and Snorkeling in Cancun”