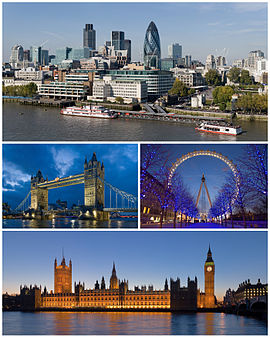 It began with a passing thought:

Monty Python is doing a reunion show in London this July. How cool would it be to go see it live? And while I’m over there I could tour some of the UK. I’ve always wanted to visit England anyway.

That was way back in the early fall. I wasn’t very serious about it at the time because I had just returned from Mexico and was a bit worn out from all of the traveling I had done since 2011: in a two year span I had visited Italy, Croatia, Switzerland, Peru, and Mexico. I figured I could use a year off from international travel, so I pushed the idea to the back of my mind, where it sat for a few months, never quite going away.

Then a couple of weeks ago I decided to see if there were any Python tickets still available. I got a great deal on a mid-level seat from a ticket brokering service for practically face value, and from there my trip was born. The original plan was to stay in London for about a week, take some trips around the English countryside, and visit Scotland. However, when I realized how easy it is to travel to so many places in Europe from London, my plans began to expand: A day trip to Paris? Sure! A three-day journey to Amsterdam and Bruges? Hell, yeah!

I knew I wouldn’t have time to do all of this in a week, so I extended my stay to just over two weeks. The downside is that the cost of the trip has skyrocketed. I didn’t realize how much everything was adding up until after I had already planned everything (I was in sticker shock after my relatively inexpensive visits to Peru and Mexico). I thought about scaling back to save some money, maybe skipping the Amsterdam tour and shortening my stay, but I don’t know when (or if) I’ll ever be in this position again, so I decided to go for it.

I had considered just heading over to London and winging it, and there’s something to be said for the laid-back nature of such a trip, but I prefer to plan ahead (I guess it’s my OCD nature), so I’ve already booked all of my tours for the two weeks, leaving myself a few days of free time to explore London. I’m the type of person who functions better with some structure anyway, and these tours will force me to do much more than I otherwise would–if left to my own devices, I would probably sleep half of my days away. 🙂

I did a lot of research into lodging in London; it’s not a cheap place to stay. In an effort to keep expenses down, I eschewed traditional hotels in favor of a no-frills studio apartment near Kings Cross. I could have gone even cheaper with a B&B or hostel, but this seemed just right for my sensibilities–a decent sized room with air-conditioning and a private bathroom. Having to check out each weekend when I leave for my trips will be a pain, but it didn’t make sense to rent the apartment for the entire 15 nights when I would be away on weekends (during which the price of the room would drastically increase).

So here’s my rough itinerary: After checking in to my room, I may do one of those hop-on, hop-off bus tours to get acquainted with the city. I also just realized that my first week in London will coincide with the second week of Wimbledon, so it might be neat to head over there and see if I can get into a match.

I’ll be taking the Eurostar train through the chunnel. The trip includes a guided tour of Paris, a two-course lunch with sparkling wine on the Eiffel Tower, a cruise on the River Seine, and an optional visit to The Louvre, which I think I will skip since I’ll only be there for the day and it’s my first time in Paris. The Louvre would be really cool to see, but I’d rather spend my only afternoon in the city wandering around and soaking in its atmosphere.

I chose a sunset tour because I thought that would be a cool time to see Stonehenge. I booked special access so that I can walk inside the circle among the stones (most people must view them from behind ropes). Earlier in the day we will be visiting the town of Bath (another place on my must-see list) to tour the Roman Baths and Pump Room. After that we visit a Saxon village called Lacock, where we will have dinner in a 13th Century inn.

I’ll probably do some walking around London and also packing for my trip to Scotland during the day before heading to the O2 that evening for the Monty Python reunion show, aka my entire reason (or excuse) for taking this Eurotrip.

This trip includes a tour of the city of Edinburgh, and I will be taking the second-day optional excursion to the Scottish Highlands, including Loch Ness (I’ll keep an eye out for Nessie!). I chose free time for the third day, during which I am planning to meander about the city and possibly tour Edinburgh Castle. Maybe I’ll swing by the Battersea Power Station to duplicate the iconic Pink Floyd Animals cover (sans flying pig). I could check out Abbey Road and Baker Street as well; turn it into an an unofficial classic rock tour. Or maybe I’ll just relax and ride the ferris wheel all day. 😉

I’m very much looking forward to this tour of the old English countryside, including visits to the historic riverside villages of Burford and Bibury. The tour originally included a visit to Stratford Upon Avon (Shakespeare’s birthplace), but it sounds like we will now be visiting Stow-on-the-Wold instead.

The first stop on this excursion is a private tour of Leeds Castle before it opens to the public. We then head to Dover for lunch and a photo op at the famous white cliffs. The next stop is Canterbury and a tour of the Cathedral followed by free time to explore the city. Then it’s off to Greenwich where, after a short walking tour, we will take a river boat along the Thames back into the heart of London. The cruise apparently includes a reception of tea/sparkling wine and scones. Sounds good to me!

My last full day in London will probably be a good time to hit all of the touristy places I might have missed earlier. I’ll also be packing for my three-day Amsterdam trip.

My first day in Amsterdam will include a walking tour, a canal cruise, and an optional evening walking tour of the Red Light District. The second day includes a trip to Zaanse Schanse, a living Dutch Museum, before heading back to Amsterdam in time for lunch, with visits to the Van Gogh Museum, Rijksmuseum, Heineken Brewery, Anne Frank House, and Dam Square. On the final day we head to Bruges, a beautiful city I’ve been wanting to visit since seeing the movie In Bruges (I wasn’t sure I’d ever make it there). Following Bruges, we arrive back in London late in the evening, giving me enough time to check in, pack, head to bed, and wake up early to fly back home.

Looking back at the itinerary now, I can’t believe how much I crammed into it (I think I went a little nuts), but it’s going to be one helluva trip. And I’ll be doing it solo. If you had told me even a few years ago that I would be flying to Europe for two weeks by myself, I would have said you were crazy. I’ve come a long way in terms of my confidence to travel alone.

Anyway, I’m glad that all of the planning and booking is behind me so I can just relax until the summer (other than trying to learn some French and Dutch). The only things I haven’t planned out ahead of time are places to eat, so I’d be grateful for any dining suggestions, particularly in London. One of the coolest aspects of becoming more involved with the blogging community has been sharing travel stories and tips with my fellow bloggers, so any suggestions you may have about things I should do while in London would be most welcome. 🙂

This will be my first overseas trip during the summer (all of my other trips were in the fall or spring), so it will be nice to not have to worry about packing layers for a change. Hopefully that means I’ll be able to travel lighter, though I don’t think I’ll be able to do the whole thing in a carry-on like I did in Mexico . . . and speaking of Mexico, I think it’s time I got back to writing up the journal of my trip. I need to finish it before June!

14 thoughts on “My London Visit Has Become an Epic Eurotrip”