Picking up where we left off in Part 1, we finally arrived at our villa in the hills of Tuscany, which would serve as our base of operations for the next two weeks.  There were 15-20 people sharing the sprawling villa, though we would separate into smaller groups for our excursions around Italy.  Most of the rooms had already been claimed but I was able to secure a nice room on the far end of the villa with decent view.

View of a Tuscan sunset from my bedroom window

That night we all walked up to the only restaurant in the area for dinner, which also served as a meet and greet session since I had not previously met most of my villa mates.   They were all very nice; it was a good group.  Dinner was delicious, a spicy bacon pasta dish.  I also had my first taste of Italian prosciutto that night, and it was amazing, nothing like the overly salty prosciutto we have in America.  I ate a ton of it during our two weeks in Italy.

The restaurant/bus stop where we spent a lot of time

I left the restaurant early by myself to go to bed since I had been awake for a good 28 hours by this point.  It was cold and windy during the walk back to the villa and I began to wonder if I had made a mistake by not packing a heavier jacket, but those worries would prove unfounded as the majority of the weather we experienced during the trip was beautiful, even into November.  I got back to the villa grounds, which was surrounded by a wall with a gate that could only be opened by an electronic key.  I had a key, but could not figure out where to use it because it was pitch black, so I wound up having to press the call button to the caretakers, an old couple who spoke no English.  After a few minutes of back and forth talking and not understanding each other, they finally let me in and I went upstairs and collapsed in my bed.

I woke up the next morning at 3:45am and couldn’t get back to sleep, so I decided to catch a Tuscan sunrise. 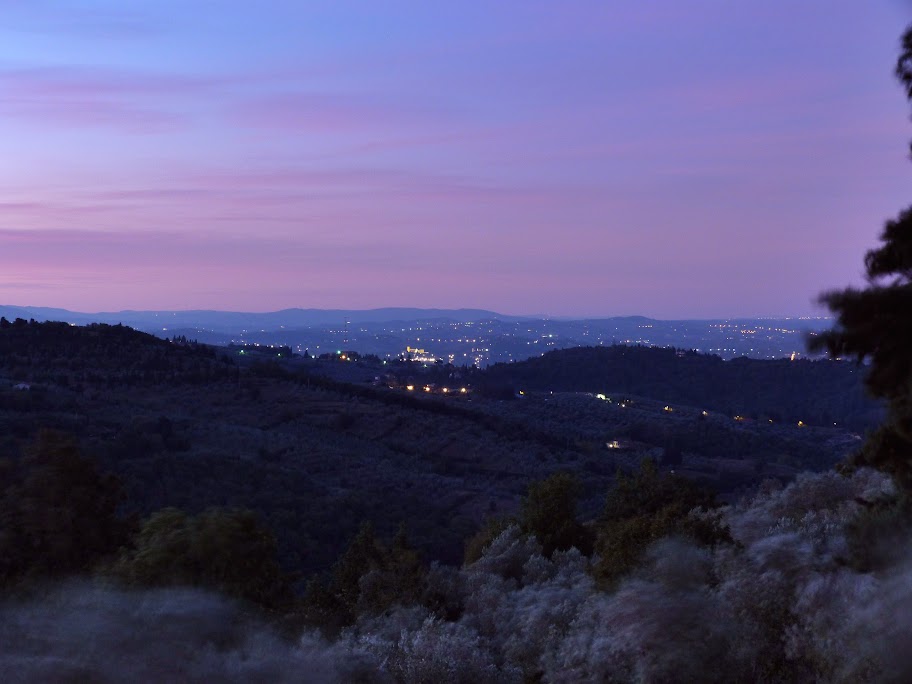 Tuscany at dawn looking toward Florence in the distance

Later that morning we took a small, rickety bus down the hill into Florence, where we spent the entire day visiting the historic center and the area along the Arno river.  The highlight of the day was our long climb to the top of Giottio’s Tower, affording us views like this:

View from the top of Giotto’s Campanile

Another view from the top of the tower

After the tower we walked along the Arno river, had lunch, and crossed the famous Ponte Vecchio, a medieval bridge with shops built along it.

After that we did some grocery shopping and headed back home for a dinner cooked by one of our villa mates.  The next day we hopped on a train (the first of many during our stay) for Lucca, a walled, medieval city.

It took us a while to find the historic center, but we eventually did, and climbed a tower for some amazing views.

View from the top of the tower we climbed in Lucca

We visited a few cathedrals, including one where I gave money to a man who I thought was collecting for entry to the church only to realize later that he was just a beggar.  Oh well, you live and learn.  For dinner we made our way to the circular main plaza at the center of the city where I had a tasty lasagna dish, topping it off with a stop for gelato (we rarely went a day without getting gelato from somewhere).

Panorama of main plaza in Lucca

That evening we returned to Florence too late to catch the bus so we had to take a cab (the last bus for the hills leaves around 6pm, so if you want to stay out later, you’re screwed).  Once again, our driver had no idea how to get to our villa and got lost, so my uncle showed him a picture of the bus stop closest to our villa on his camera, which did the trick.  Unfortunately, the driver forgot to return the camera and my uncle was unable to retrieve it from the cab company after numerous calls.  Fortunately, he had his iPad to tide him over for taking pictures until he could purchase a new camera.

We eventually made it back to the villa and, after some socializing, I began packing for our three-day trip to Rome, which will be covered in Part 3.  In the meantime, you can follow the links below for more pictures from this part of my trip.