This installment covers Day 24 of my 2011 trip to Europe…

November 6, 2011: On our last day in Split we headed down to the bus station to catch an early four-hour ride down to Dubrovnik. The majority of the bus ride took us along the beautiful Croatian coast. The scenery was spectacular and there were plenty of stops along the way so we weren’t cooped up in our bus seats for the entire journey.

Here are some views from the bus. These photos were taken with my cell phone through the window of a moving vehicle, hence the lower quality:

Along the road to Dubrovnik the route actually passes through Bosnia for a brief stretch before resuming in Croatia. When we reached the Bosnian border, officers boarded the bus to view everyone’s passports. We then stopped at a rest area while still in Bosnia, where my uncle nearly got left behind because he was outside messing around with his iPad as the bus was about to leave. The bus driver beeped at him and he finally boarded, but not to worry, I wouldn’t have let the bus take off without him. 🙂

We arrived at the bus station and proceeded to look for a cab to take us to our hotel. When one was not available, we hitched a ride with a private driver who had been parked at the bus stop offering to take people into town for a flat fee. This appears to be a common practice in the area.

We booked a hotel that was about a 15-20 minute walk outside of the old city because when I was researching places to stay, I had read that bedbugs can be a problem in some of the properties in town. I don’t know how true this is, but I didn’t want to take any chances. It was a pretty nice hotel room (probably the best one we stayed in during our entire European trip) with a view of the Adriatic.

After settling in, we left the hotel and walked into town. Here are a couple of views along the route we walked: 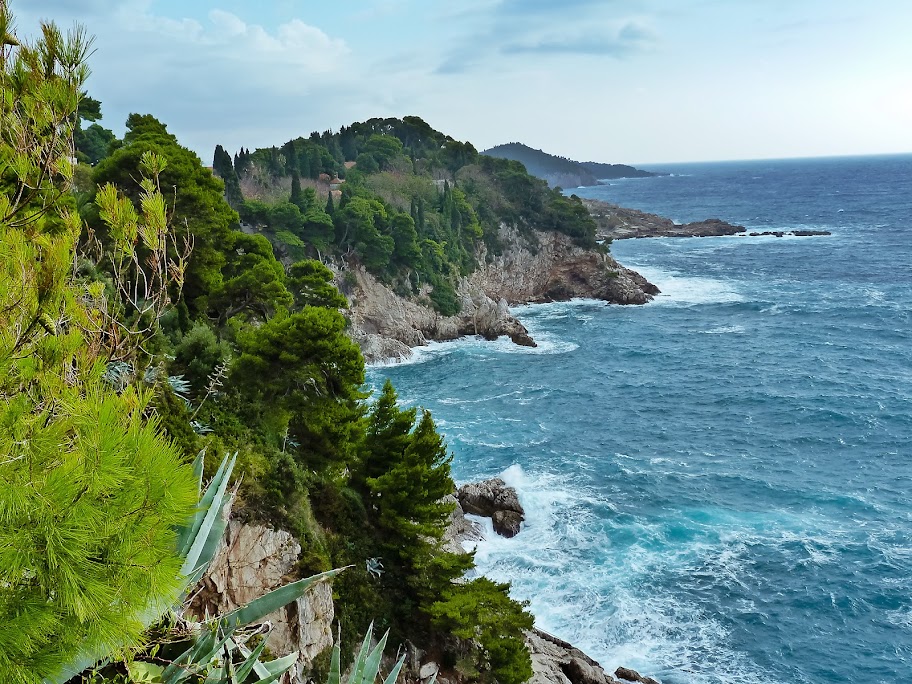 Not quite sure where we were going, we wound up taking the long way there, but eventually we came upon the majestic walled city.

We were starving by this point so we decided to grab some dinner. We entered the old city and sat down at one of the first cafes we found on a side street, where we enjoyed a delicious pizza with a spicy salami similar to pepperoni. It was the best pizza I’d had since Venice and I can see why some people think Croatian pizza is even better than Italian.

After dinner we walked around the city as night fell. Here are some photos of Dubrovnik at night.

We then headed home. Most of the 20-minute walk back to the hotel was up a steep hill. We were laboring by the time we got back, and thus decided that for the rest of our stay we would take the bus. We headed to the hotel bar, where I capped the night off with a Croatian beer followed by a delicious mai tai. I then briefly skyped with my wife, during which I time I was able to hear my dog bark for the first time in 3 1/2 weeks, which alone made battling the spotty wi-fi worth it.  I then turned in for the evening.

We would spend most of the next day walking the wall that surrounds the old city, which will be covered in the next installment. Until then, here is one more nighttime photo, a long exposure that resulted in a neat fairy tale-ish effect of the water misting over the rocks.