November 1, 2013: A few hours after my morning pickup in Mexico City I landed in Merida. As the plane approached I got a good bird’s-eye view of the Yucatan Peninsula: lush, green, and flat. The noon sun was almost directly overhead, which resulted in the neat effect of the clouds casting shadows that looked like lakes: 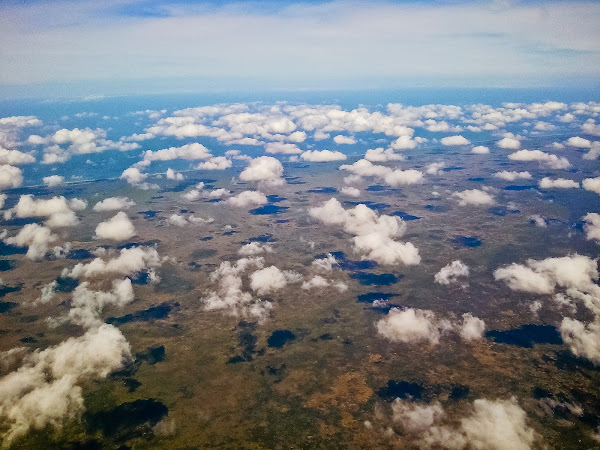 The first thing that struck me when I stepped out of the airport was the humidity. I knew it would be hotter on the Yucatan Peninsula, but I was not prepared for the feeling of stepping outside into a steam room. The temperature was in the 90’s and the humidity level was over 90-percent, which meant that sweat basically began pouring off you right away. The humidity also wreaked havoc with my camera; the lens fogged up as soon as I walked outside. I had to head back inside and treat the lens with an anti-fog coating.

My Merida guide met me at the airport and took me on a tour of the city via automobile. As with my first full day in Mexico City, I was the only person in the vehicle, so it was essentially my own private tour. Merida is a very charming city full of colonial architecture and devoid of skyscrapers. I did not take pictures from the car because I figured I’d return to most of these sites on foot. Unfortunately, I was not feeling too well during my two days in Merida, so I did not see as much of the city as I would have liked.

The guide was very good, giving me lots of historical background. Regarding the heat, he told me that even at its coldest the temperature in Merida rarely dips below the 60’s, but during that time the locals can been seen walking around in sweaters and scarves, which I found amusing since those of us enduring this brutal winter in the States would consider 60 degrees practically beach weather. 😉

I was disappointed to learn that Merida had already had its big Day of the Dead celebration, complete with full parade to the cemetery, on the previous day, so I missed out on all of the festivities. I had timed my trip so that I would arrive in Merida on November 1, which I thought was the first official day of the holiday, but as my guide pointed out, the previous day was for the public while November 1st and 2nd are more for the family. Oh well, I guess I should have researched that better.

After the tour the guide dropped me at my hotel, The Fiesta Americana, and waited while I checked in. The hotel had a very cool interior, by far the nicest of the hotels in which I stayed during this trip.

After getting settled in my room I returned downstairs so my guide could drive me back into the center of town and drop me off. Although my hotel was little more than a mile from the center of town (easy walking distance), I nevertheless appreciated the ride. No sooner had I started meandering about than a man came up to me and started chatting me up. He wanted me to come eat lunch in his restaurant. I would have liked to explore my options, but I figured what the hell, I was hungry anyway. I ordered a traditional Yucatan dish, a chicken stew type of thing; it was pretty good.

After lunch, the restaurant owner offered to show me to some museum that only locals know about. Based on my experience in Mexico so far, I figured it was a ploy to get me to buy something, but I went along because he was a nice guy. He took me into a building and upstairs and then left. The “museum” turned out to just be a shop of the same type of stuff you could buy anywhere else, so I left quickly, much to the shop owner’s chagrin.

I then walked around some more and slowly made my way back to the hotel, figuring I’d come back into town around dinner time. That did not happen as I was feeling the effects of both the humidity and perhaps some food I ate, so I skipped dinner, though I did head out later that evening for a walk. After returning, I went to bed. I had an early pickup scheduled in the morning for my trip out to Uxmal, an excursion to which I was very much looking forward.

Here are some photos from my day in Merida: