October 30, 2013, Mexico City: I was back at my hotel around 4 p.m. after my tour ended without the scheduled visit to the historic city center. My guide claimed he could not take me there because protests were preventing traffic from getting through, but I didn’t want to leave Mexico City without visiting the excavation site of the Templo Mayor, the great dual pyramid of the Aztec capital of Tenochtitlan, so I decided to make the long walk to the city center myself. It appeared that it would take about an hour to reach the Templo Mayor, though in reality it would be closer to 90 minutes after factoring in stops for sightseeing.

I didn’t have access to a map or a data plan on my phone, so I mapped a route out on my wifi tablet, committed it to memory, and then snapped photos of the important turns with my phone so I could reference them when necessary. Rather than walking along the main highway, I chose a back way that looked a bit more direct and would enable me to see more of the city.

As I approached the city center I began to notice police lined up in the streets dressed in riot gear. However, traffic appeared to be getting by fine, so I was annoyed that my guide didn’t even try to take me there. On the other hand, if he had, I would never have seen all of the things I did on my walk that afternoon and evening, so I guess it worked out.

The very center of the city is a pedestrian area (i.e., no cars) which reminded me of some cities in Europe.

I meandered about the main square (known as the Zócalo), soaking in the atmosphere, taking time to appreciate the architecture of the historic buildings, and watching the locals set up for Day of the Dead.

At one point a military squad armed with rifles marched into the square, which can be somewhat unnerving when you’re a visitor in a foreign country, especially after hearing about the protests and seeing the riot police earlier, but I was more fascinated than anything.

I turned my attention back to the task for which I had originally set out: finding the excavation site of the Templo Mayor. A few more minutes of walking and I arrived. There’s not a lot to see (I think most people would walk by without much of a second glance), but I found it amazing to be standing on the site of what was once the great pyramid at the heart of the Aztec empire. I’ve always been fascinated with Mesoamerican culture (I even incorporated the Aztecs into my novel, complete with a sequence that takes place inside the Templo Mayor), so to be standing here among its ruins was sort of a Holy Grail moment for me. Unfortunately, the museum was closed, so there wasn’t much more to do than snap a couple of photos.

My quest fulfilled, it was time for dinner. I walked around looking for a place where I could try tacos al pastor, which had been recommended by a fellow blogger. It’s basically meat (usually pork) cooked on a spit, similar to how a gyro or doener is made. I eventually found a place and sat down. I was the only non-local in there so that was a good sign. The tacos did not disappoint. Delicious.

By the time I left the restaurant it was dark.

I walked around the pedestrian area and indulged in some gelato before coming across street performers dressed in costume. Freddy Kruger and Jason Voorhees stalking the streets of Mexico City was an interesting sight.

A little later I stumbled onto an early Day of the Dead celebration.

I wasn’t sure I could enter so I watched from outside for a little bit, but when I saw other people coming and going, I decided to head in. It was pretty cool, there were decorations, dancers, and people dressed in traditional Catrina costumes. It was a small event, but a nice prelude to the full-blown festivities I thought I would be experiencing later that week in Merida (which was not to be, but more on that later). Here are some photos: 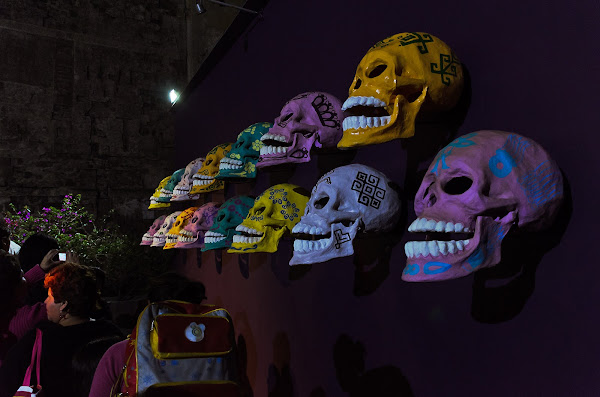 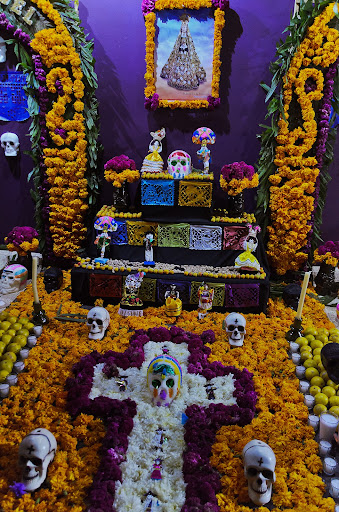 The Day of the Dead event was being held in the shadow of one of Mexico City’s tallest buildings, the Torre Latinoamericana. On the advice of another fellow blogger, who told me I could save money and avoid the crowds by bypassing the observation deck and heading straight to the bar (the blogging community sure came in handy on this trip), I took the elevator up to the bar.

The blue-lit bar had a noirish feel to it, and the man in this photo had the perfect outfit for the atmosphere.

It was mostly empty, so I grabbed a table by the window and ordered a corona while enjoying a spectacular view of Mexico City. It was strange to hear American music blasting on the stereo, especially of the 80’s hair metal variety (I can’t remember the last time I heard Europe’s The Final Countdown.). I called my wife while I was there to check in, but a combination of loud music and a bad connection forced me to keep the conversation short.

After finishing my beer I headed down for the long walk back to my hotel. I decided to take the main road home rather than returning the way I had come since I didn’t want to walk down unfamiliar back streets in the dark. I hadn’t mapped this way out ahead of time, but I knew that the main road ran close to my hotel, and I was confident in my sense of direction.

It began lightly raining during my walk, but not enough to pull my poncho out of my backpack, so I just wore my windbreaker. I was surprised to discover how warm it was–I had brought layers for mornings and evenings based on the average temperature in Mexico City for late October, but I never really needed them.

On the way home I found a churro stand (whoohoo!). Although I had already indulged in gelato, there was no way I was missing out on a fresh churro, this one filled with chocolate. Besides, pigging out on good food is what vacation is all about, at least for me. 🙂

I eventually found my way back to the hotel and turned in, exhausted from all of the walking I had done, and hoping I would not be too sore the following day when I reached the pyramids at Teotihuacan. Lots of climbing lay ahead of me.

View more of my photos from Mexico