November 8, 2011: Our final non-travel day in Europe featured summer weather and a cool cable car ride to the top of a mountain to see Dubrovnik in all its glory. But first we visited the impressive Fort Lovrijenac, which sits atop a massive rock looming over the entire city.

Just like the previous day when we walked the city walls, the fort was devoid of crowds (the advantage of being there in November). In fact, we basically had the entire fortress to ourselves, as you can see in the photos below. If you viewed my post about Game of Thrones filming locations, many of these photos will look familiar (click on any image to view a larger version):

The fort is a great place to enjoy spectacular views of the walled city: 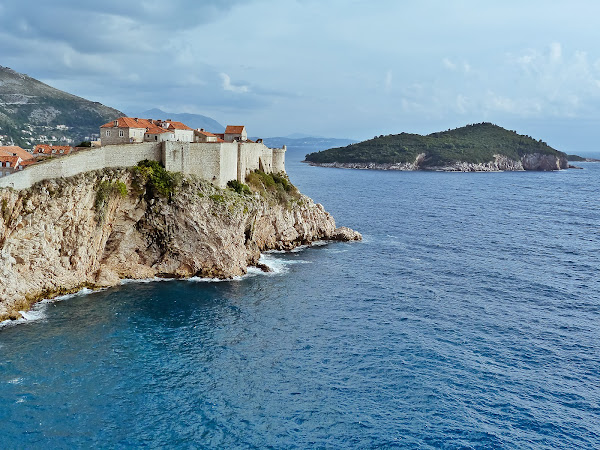 After our visit to the fort, we headed to the other end of the city to catch a cable car ride to the top of Srd Hill.

This is where you get the iconic view of Dubrovnik from up high.

Here’s a panorama of the landscape behind Srd Hill:

While up there I visited a war ravaged building called Fort Imperial. Inside is a museum dedicated to the 1990’s Croatian War for Independence. After visiting the museum I walked around the outside of the building where there are signs saying to do so at your own risk, due to the structural damage and leftover debris.

Here are a few more photos from on top of the hill: 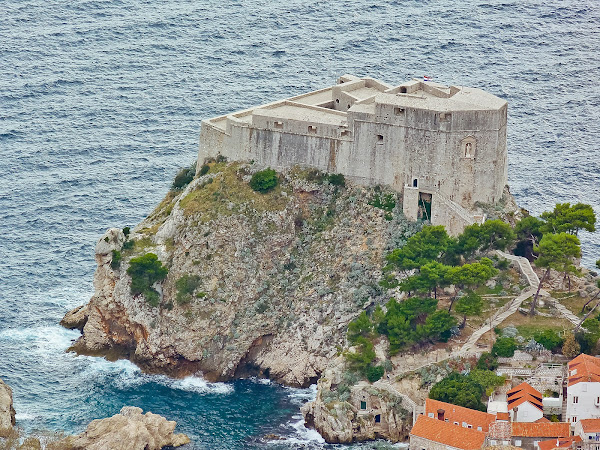 After descending Srd Hill, my uncle returned to the hotel while I decided to stay in the city. We agreed to meet up later for dinner. I thought I’d to visit the city aquarium but unfortunately discovered that it was closed. Instead I headed out to the rocks on the shore outside of the city walls. There was not another soul in sight so I was able to sit back and relax as if I had the entire city to myself. I sat beneath the rock in the picture below and gazed out into the sea as the water crashed against the rocks. Simply sublime.

Being alone also allowed me to get a little goofy, as I used the self-timer to snap my traditional Karate Kid photo, which I do on almost every trip: 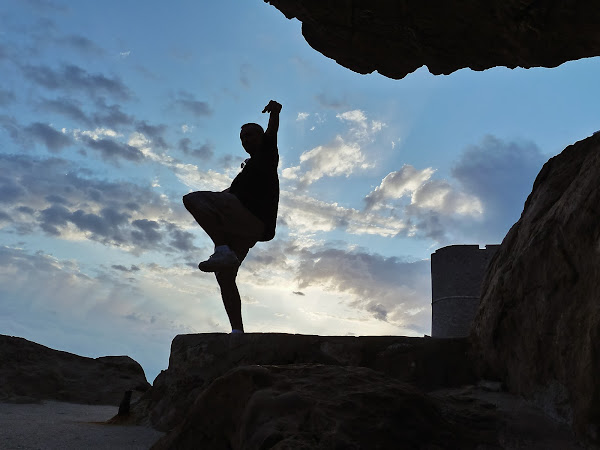 I then decided to check out a café that serves drinks on the rocks along a different part of the wall. It can be easy to miss if you don’t know to look for it; it’s basically through a little hole in the wall. I had a couple of drinks there and watched the sun set. Here’s a photo of the café taken from up on the wall (it only seems to be open in the early evening): 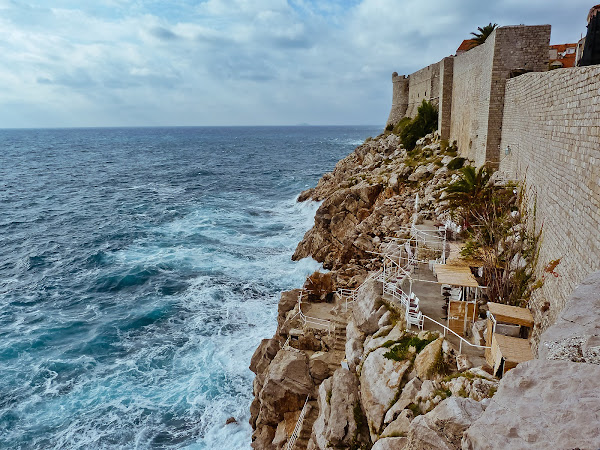 Later I met up with my uncle and we had our final dinner in Europe at nice a place just outside of town. We then headed back to the hotel to pack for two days of planes, trains, and automobiles until we finally made it back home to New Jersey.

We awoke early the next morning to catch a cab to the bus station, where we hopped on a bus for the four-hour ride back to Split. When we arrived in Split we once again had to fend off all of the people at the train station looking to rent us rooms. We had a long layover before the train to Zagreb was due, so we stored our luggage in lockers and headed into the city. I was glad to be able to pay one final visit to Split; our stay there had been the most pleasant surprise of the entire trip. We had lunch at an outdoor café in the square pictured below, where I had a very tasty pork dish.

The train to Zagreb ran very late, so we didn’t arrive at our hotel until late that night. We had a super early cab ride to the airport the following morning, and thus did not have time to go into the city for dinner; I just had a panini in the train station, then packed for the flight.

From Zagreb we flew to Amsterdam for a 3-hour layover, where they were already celebrating Christmas in early November—there were decorated trees all over the airport. From there it was a long flight back to JFK Airport. I mentioned in Part 1 my desire never to fly out of JFK again, and the return trip only reinforced it. On a good day you could probably drive from JFK to my house in about 90 minutes, but between ridiculously long customs lines, a disorganized shuttle service (which I will also never use again), and bumper-to-bumper traffic on the roads, it took us roughly 7 hours to get home from the time we landed. Finally, we made it to my front door, where I was greeted by my wife and dog after a month apart. It was good to be back home.

And with that, our epic 28-day Eurotrip was over, as is my two-year odyssey of writing this journal. But before signing off I need to give a shout-out to my Uncle Kipp, who made the entire trip possible, first by organizing our group’s two-week stay in beautiful Tuscany that helped me realize my dream of touring Italy, and then by inviting me to accompany him to Switzerland and Croatia after the rest of the group went home. Croatia might never have been on my radar as a place to visit if not for Uncle Kipp, but I’m so glad I went. What an amazing country. The entire trip was an incredible experience that I’ll always cherish. It truly was the trip of a lifetime—lord knows I’ll never be able to take that much time off from work again. 🙂