This is the fourth part of my Eurotrip 2009 Revisited series, a special edition of sorts in which I have divided the original post into smaller parts while incorporating minor copy edits and a few new (and reprocessed) images. 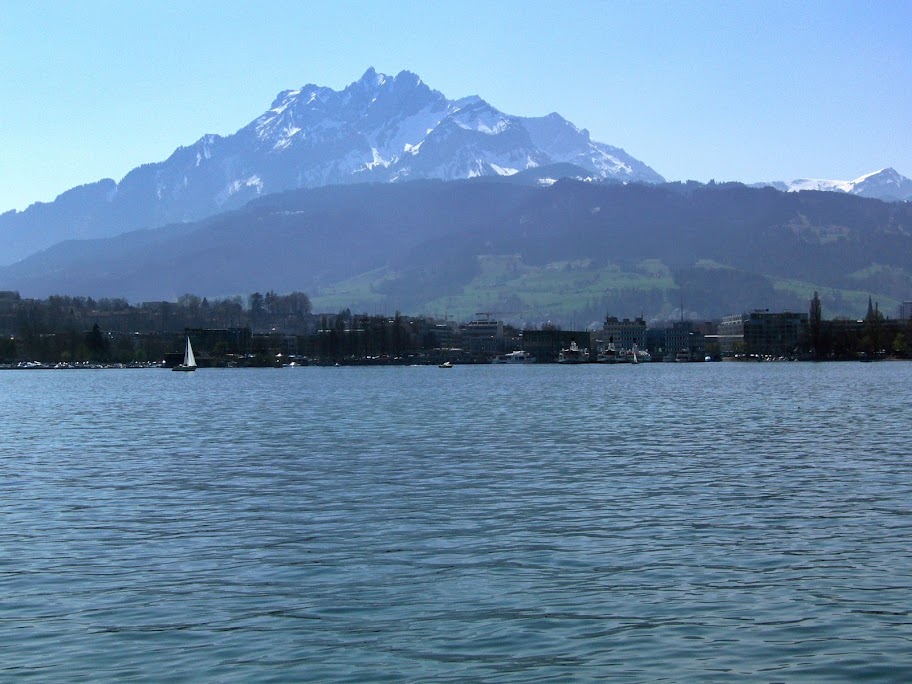 We left Innsbruck after lunch for a very long bus ride to Switzerland. On the way we stopped briefly in Liechtenstein, the world’s smallest principality, basically a tiny independent kingdom complete with its own royal palace: 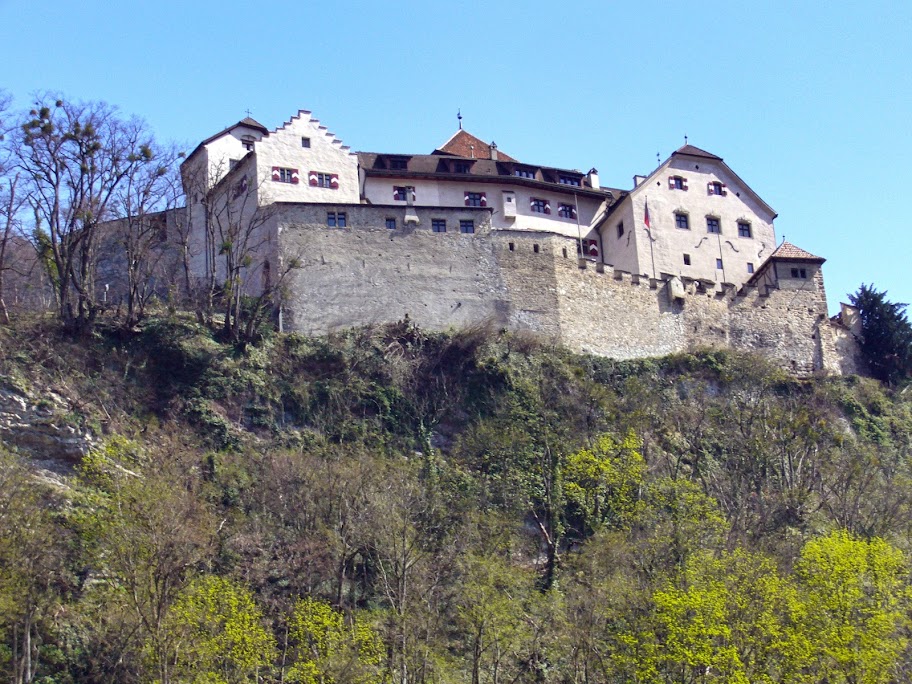 Our guide Keith pointed out that Liechtenstein has three political parties: the conservatives, the more conservatives, and the ultra conservatives. I thought to myself: sounds like some places I know in the States. 🙂 We didn’t have time to tour the palace, so after taking a few photos and getting our passports stamped, we were back on the bus.

On the way to Lucerne we passed by some of the most beautiful scenery you are likely to gaze upon, including giant lakes surrounded by tall mountains and rolling green hills like something out of The Hobbit: 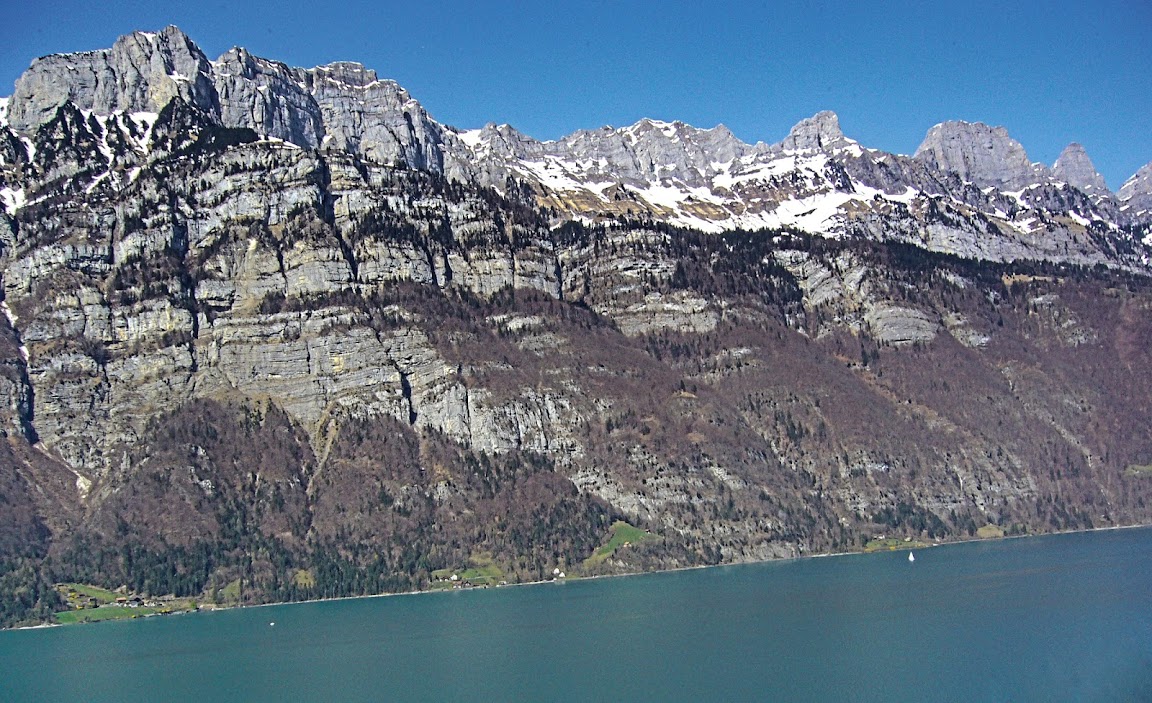 Swiss countryside taken from bus.
Bad window reflections but I wanted to get a shot of the rolling hills.

Right outside of the city we got stuck in a traffic jam due to an accident that had people rubbernecking, so it took us a little longer to get in. After finally reaching the city we were dropped off in the town center for shopping. I bought lots of chocolate and picked up my free souvenir spoon from the Bucherer. I also picked up another t-shirt and a postcard, which I had been collecting from every country for a friend of Jen’s.

We later checked into a very nice hotel right along the lake, of which I had a nice view from my room when I stuck my head out the window. The room had motion sensor lights for the bathrooms that I thought were pretty cool until I realized that the lights would often go out when I was in the middle of doing something like brushing my teeth. The hotel served a good dinner that night: a cheese ravioli appetizer followed by a beef dish with hash browns. The dinner portion was a little on the small side, but I’m used to gluttonous America where everything is supersized. 😉

That night we walked to the Lion Monument, and then around town and the lake, which is all lit up at night: 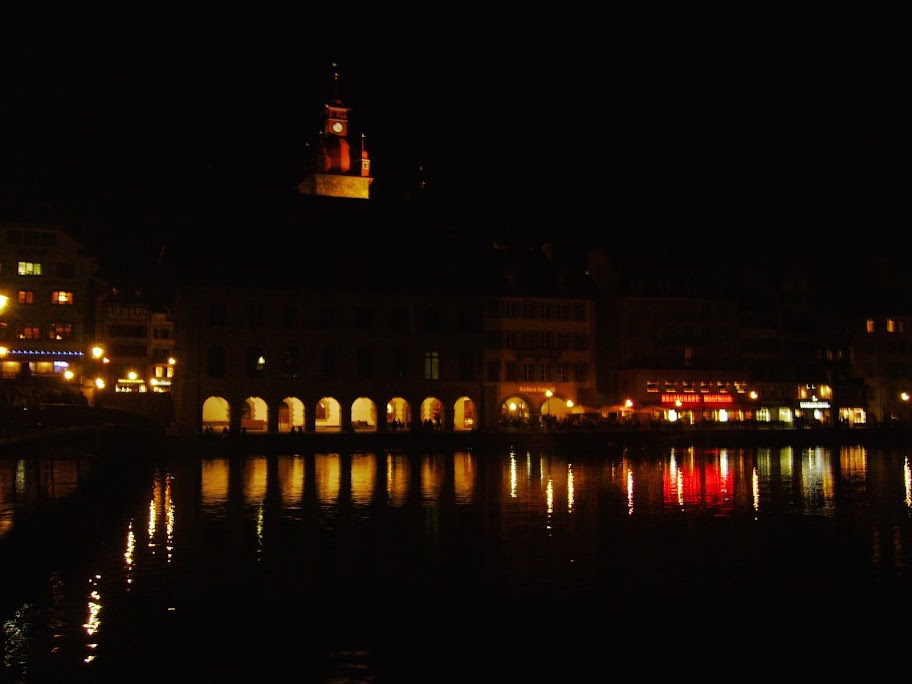 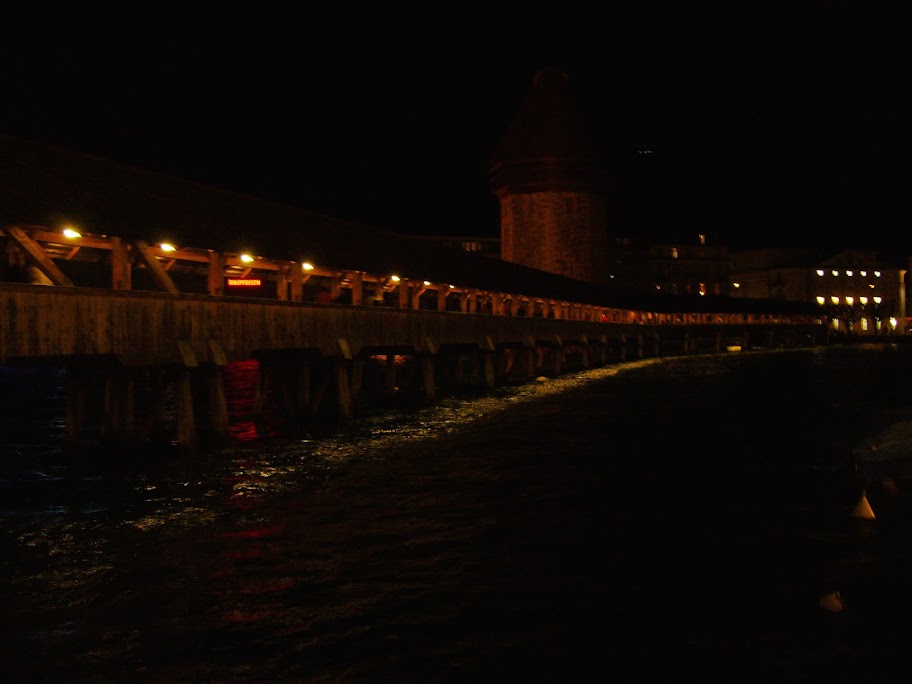 The covered pedestrian bridge in Lucerne

We ended up at a cafe where we sat in the outdoor balcony overlooking the lake drinking a beer that cost 8 1/2 franks. One thing you learn about Lucerne is that it’s kind of a tourist trap; everything is very expensive. Nevertheless, of all the cities I have visited in Europe, it is one of my favorites.  The views of the massive lake surrounded by the Alps (especially Mt. Pilatus, which towers over the city) are phenomenal, and the town itself exudes old world charm with its pedestrian streets, old buildings, and covered bridges.

After our beer we walked to McDonald’s to quell the late night munchies (sort of a tradition in that we did the same thing two years ago), where I had a Cheeseburger Royale (for you Pulp Fiction fans). During the long walk back to the hotel we bumped into a few less-than-kind locals. First, an older guy cut in front of our group, holding his hand up like a stop sign as he crossed in front of us. Later, a young guy with his friends mocked us for having cameras. Oh well, it’s all part of the travel experience. That night I finally got to bed around 1:30am.

The next morning the hotel served a nice breakfast that included bacon! Most of the breakfasts on the trip were more of a continental style, so this was a treat. After breakfast we hopped on the bus for Mt. Pilatus. To get to the top of the mountain you take two sets of cable cars. The first is a small four-person car, then about halfway up you transfer to a large car that holds roughly 30 people standing. At one point, the land along which the car is skimming suddenly drops away and you find yourself dangling over nothing but air—this always elicits a “whoa!’ from the crowd. On the way up the mountain you watch as the terrain gradually changes from green to snow.

The top of the mountain is breathtaking; no picture or description could ever do it justice, but here are a few: 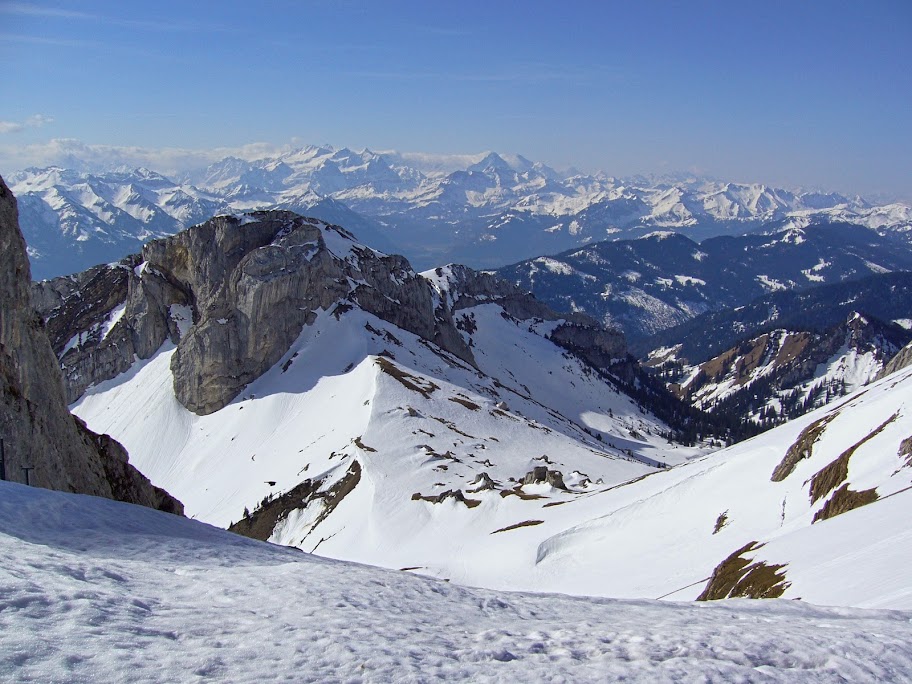 At the top of Mt. Pilatus 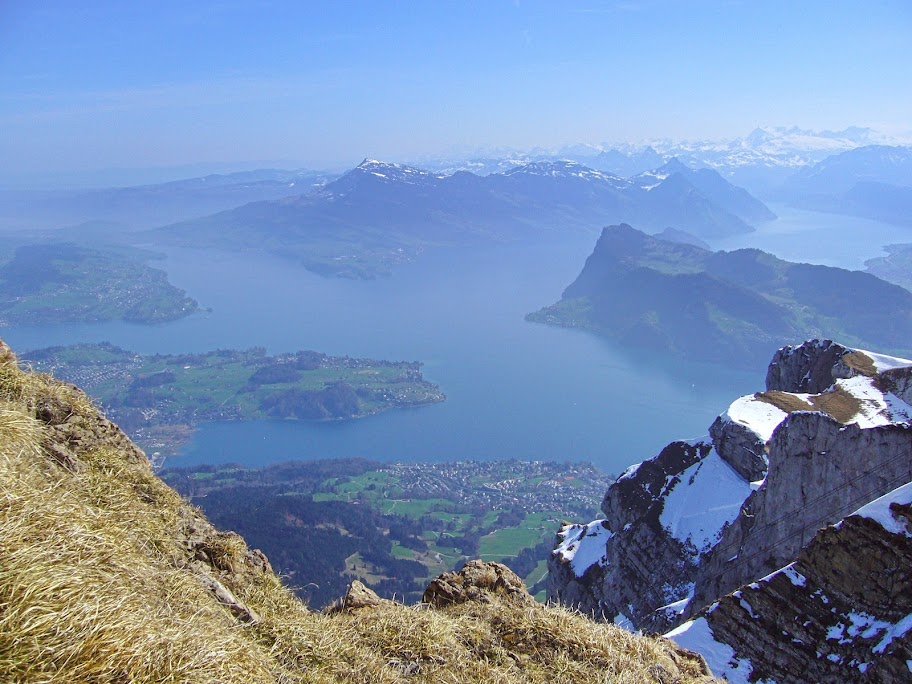 View of Lucerne from the top of Mt. Pilatus 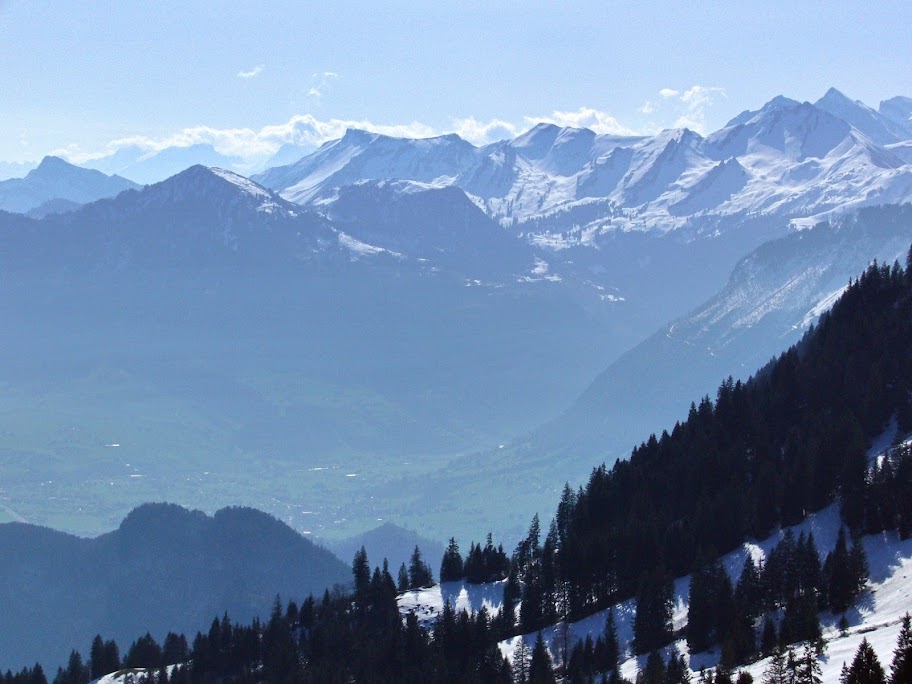 Gazing at the Alps from Mt. Pilatus

That afternoon I had some time to myself so I walked along the lake toward town taking photos. I stopped for a Doener, a popular Middle Eastern sandwich similar to a gyro, and decided to join the other lunching Europeans by eating it down by the lake with my feet hanging over the edge, enjoying the beautiful day and the incredible view: 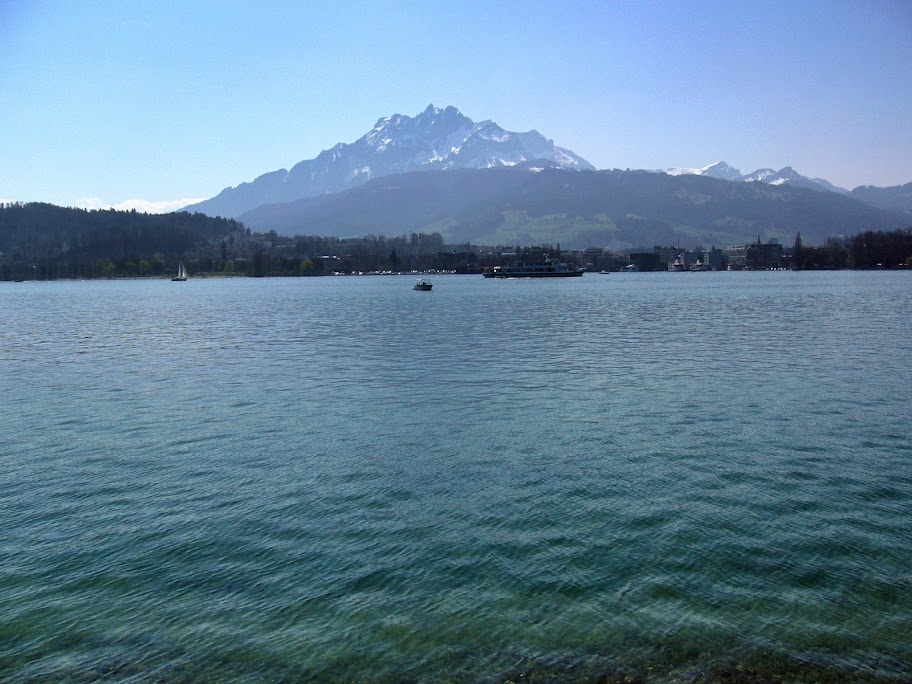 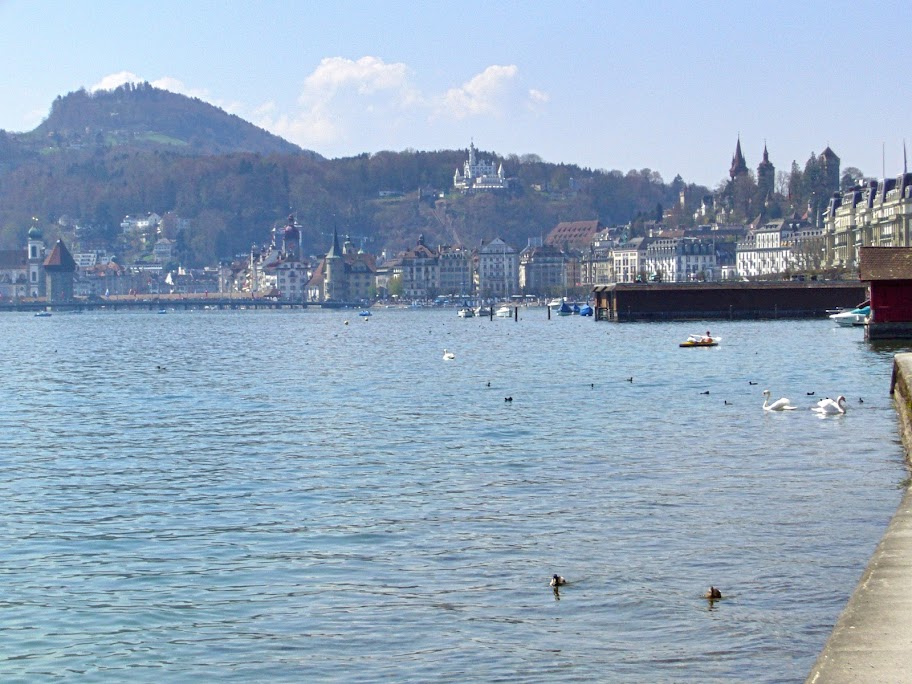 After lunch I walked into town to take out more francs in order to pay for the boat ride our group was supposed to be taking that evening. Unfortunately, the boat ride would later be canceled, so I ended up with a bunch of extra franks. Anyway, I went to a place called the Tea Room and ordered a cup of green tea for five francs. As I mentioned, things are expensive in Lucerne: I had earlier bought an eight-franc Fanta on Pilatus, and two years ago Uncle Kipp and I shared a cheese fondue lunch that cost around 50 francs.

While in the tea room I bumped into Keith and the adults from the Virginia group, so I sat with them. I decided to go up to the bakery counter and order a chocolate mousse cake to go with my green tea. About halfway through my delicious desert, one of the store employees came up to the table and asked me to come to the cashier at the bakery counter—I had left my wallet, passport, and return plane ticket (which had been inside the passport) on the counter!!! Everything that identified me as me was sitting on that counter for anyone to take. I would have been stuck in a foreign country with no money or identification, so I was eternally thankful for the honesty of the cashier. That was the second time I had misplaced my passport on the trip, so lesson learned—I’ve used one of those around-the-neck portfolio wallets for every trip since then.

After dessert I made my way back to the hotel following a quick stroll through the underground pedestrian mall. After getting back to the hotel we had about an hour before dinner so I decided to take a walk along the other end of the lake taking more photos, with Amber and Sam tagging along: 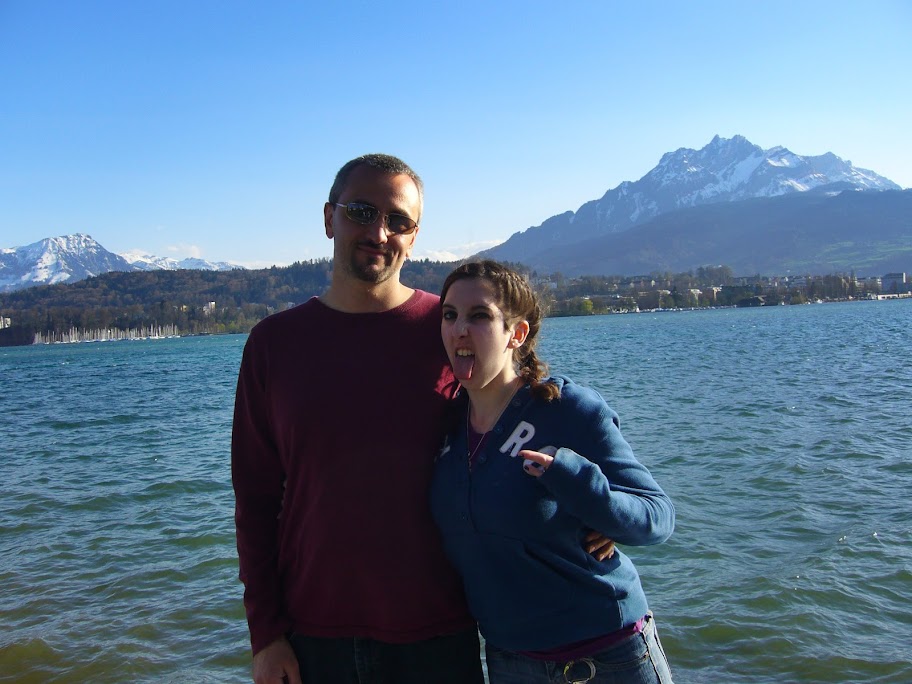 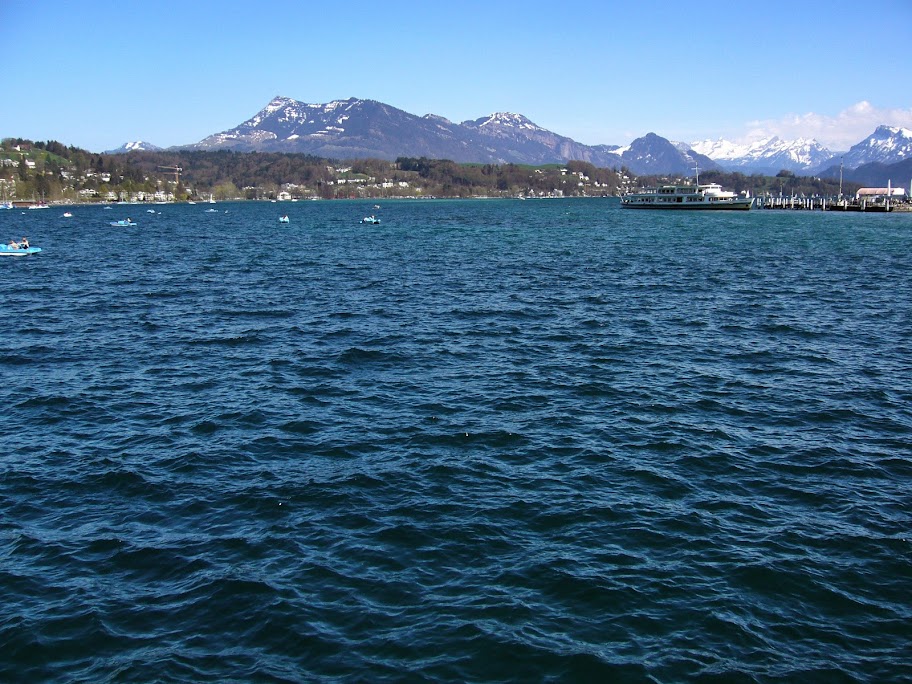 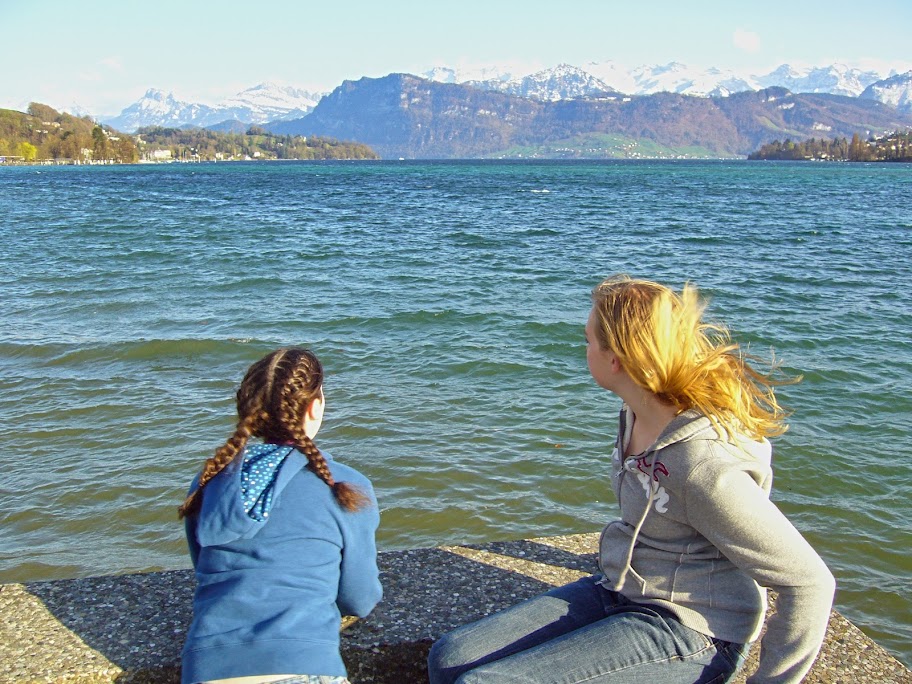 Amber and Sam looking over the lake 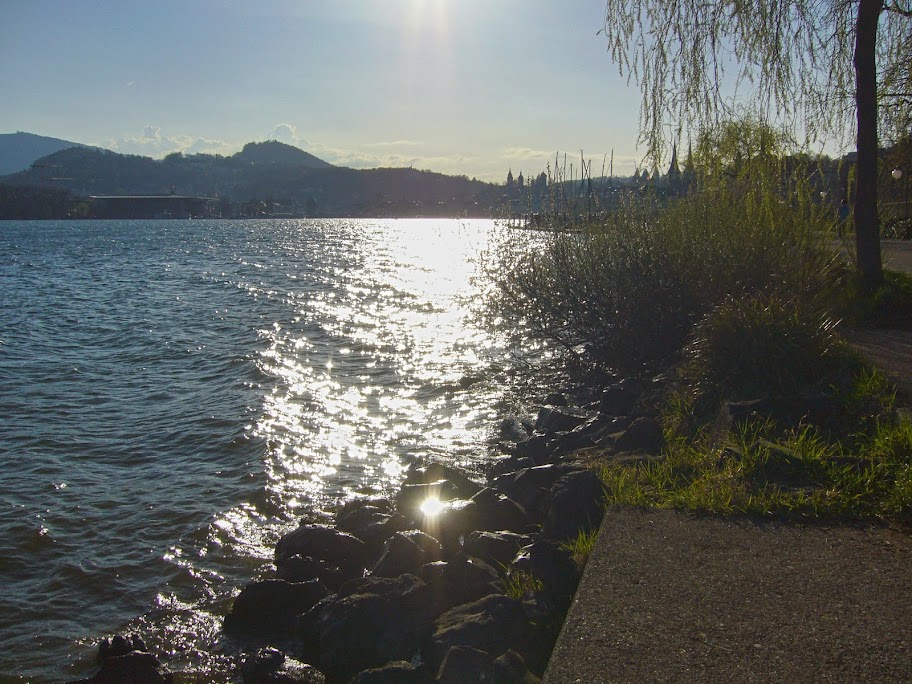 Sun setting over the lake

Dinner at the hotel that night was roast chicken with french fries and ice cream for dessert. I also had some white wine. That night the students decided that they didn’t feel like going out; they just wanted to hang out at the hotel, so I took Amber out and we walked around the town: 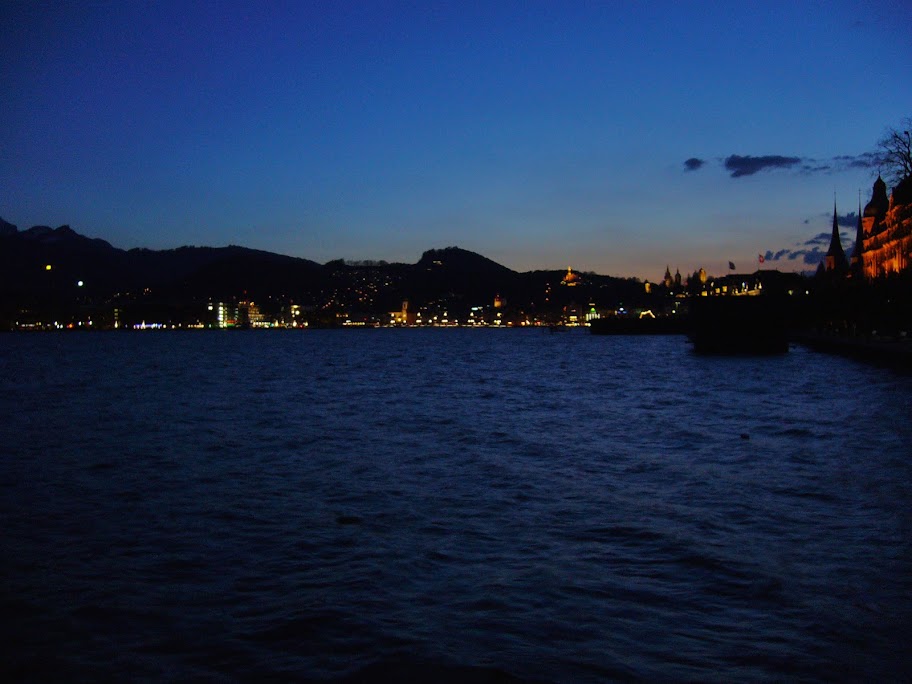 We stopped at a small bar off the beaten path and I bought Amber a radler, though when I ordered the drinks the waiter looked at me like I had two heads because they call it something different in Switzerland. At this point I still had 20 francs left and since it was our last night in Switzerland, I needed to blow through them. Sure, I could have exchanged them later, but where’s the fun in that? So I decided to take Amber to her first ever casino since the legal age there is 18.

We had to pay a cover charge to get in, which left us each with only five francs, but that was fine, because I’m not a gambler myself, and it was enough to give Amber a taste (and bragging rights to her friends who still had to wait three years to legally enter a casino in the States). We stuck to the slots, and needless to say, we lasted about 15 minutes before running out of money. A guy from the New York group named Mark had actually won $200 the night before, but no such luck for us.

After leaving the casino we went back to the hotel. Amber went to bed while I stopped in the hotel bar, where I bumped into Mark, and we hung out for about a half hour talking before I finally went up to bed myself. The next morning we would be heading back to Germany for the final leg of our trip, which will be covered in the next installment.