This is the third part of my Eurotrip 2009 Revisited series, a special edition of sorts in which I have divided the original post into smaller parts while incorporating minor copy edits and a few new (and reprocessed) images. 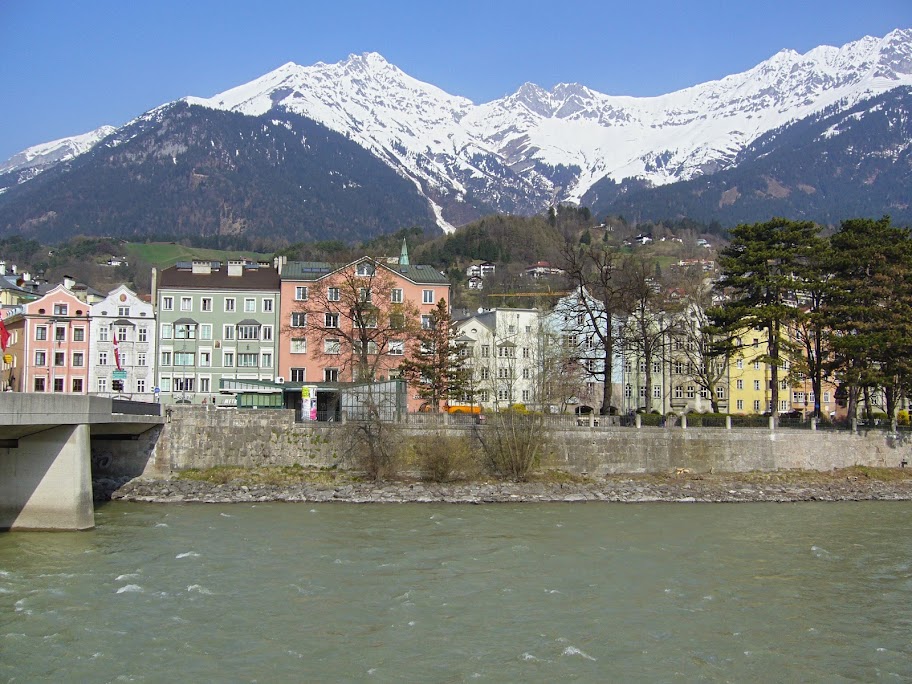 After spending our last night in Munich, we had a (gasp) 6:15 wakeup call the next morning, though I actually awoke on my own at 5:45. Following breakfast we were on the road to Neuschwanstein, the fairy tale castle of King Ludwig II. The Sleeping Beauty castle of Disneyland was based on Neuschwanstein . . . and for you Spaceballs fans, it was also used as Castle Druidia in that film. 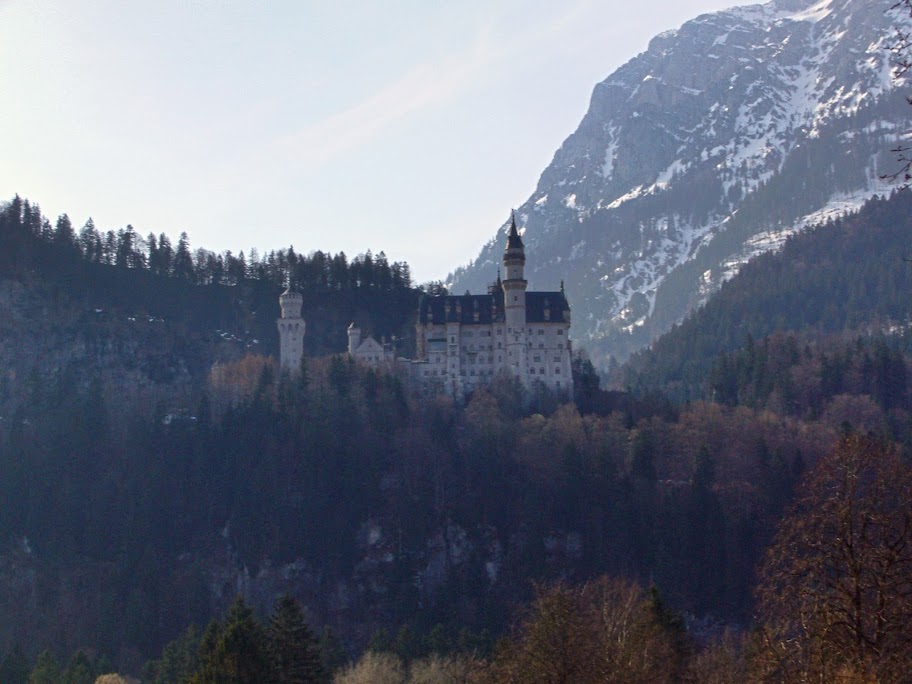 Neuschwanstein from down below 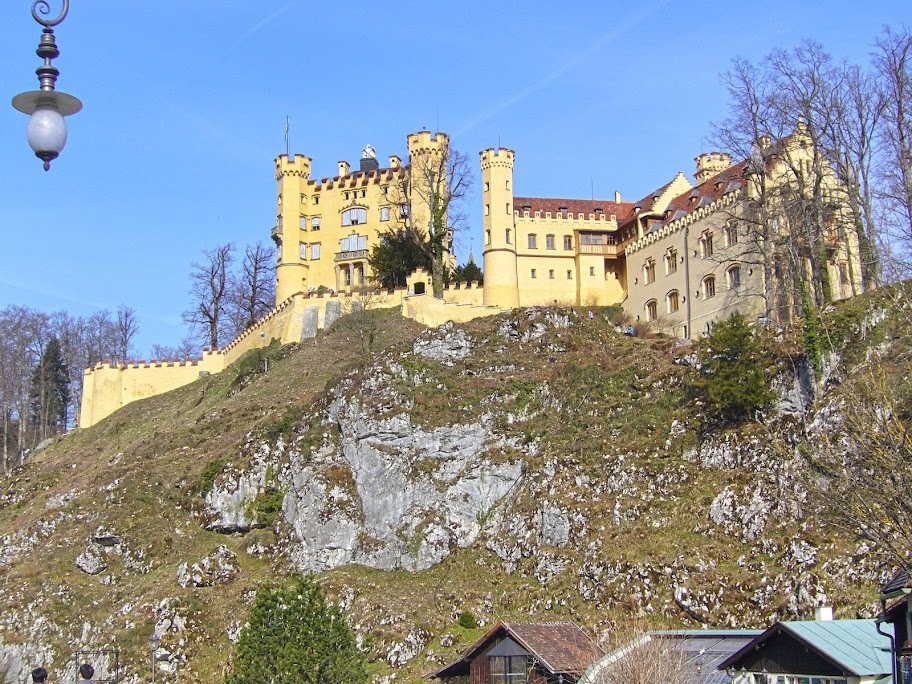 The long climb to the top of the mountain where Neuschwanstein sits was much easier for me than it had been two years ago when I was carrying around 30 extra pounds. We toured the amazing inside of the castle (Ludwig was like an overgrown child; all of his rooms were extravagantly themed on Wagner operas, and he even had an indoor cave built just outside his bedroom). Unfortunately, they don’t let you take any pictures inside (I tried to sneak a few pics from under my jacket but they didn’t come out), so here’s an exterior shot of the valley taken from the castle:

One of my favorite scenes at Neuschwanstein

After the tour we made our way to the Marienbrücke, a bridge over a gorge that normally provides a stunning view of the castle, but unfortunately the entire side of the castle was covered in scaffolding. Luckily, I had gotten great pictures when I was here in 2007, so it wasn’t a huge loss. 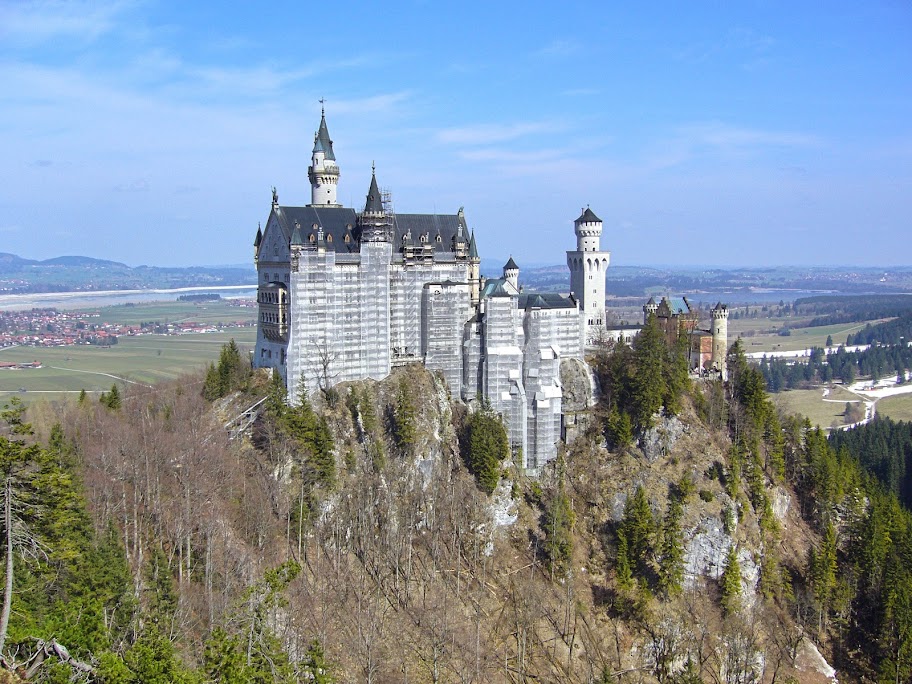 Amber and I crossed the bridge and began climbing the path to the top of the mountain, during which I took my obligatory Karate Kid photo: After a short climb we decided to make our way back, but were separated from the rest of the group, so we started walking back down the mountain on our own. We came to a fork, at which a sign seemed to indicate that we could get to the bottom taking either path, but one was shorter than the other. We took the short path, which was steeper than the traditional path.

About halfway down we reached a dead-end, so we climbed back up to an intersection where the path appeared to continue on down the hill, but we didn’t want to take anymore chances and wind up late for the bus, so we climbed all the way back up the steep path to the original fork, an arduous climb with the clock ticking—Amber had never heard me curse so much in her life 🙂

Eventually we made it back to the original path on which we had climbed up to the castle, but way too late for lunch, so I grabbed a Bavarian hamburger and munched it on the way down. We made it back to the bus just in time, putting a little scare into Uncle Kipp, but as it turned out, the leader of the NY group was 15 minutes late, so we would have been fine.

Our next stop was the Wieskirche (also known as the church in the meadow). Here’s one shot of its amazing interior: 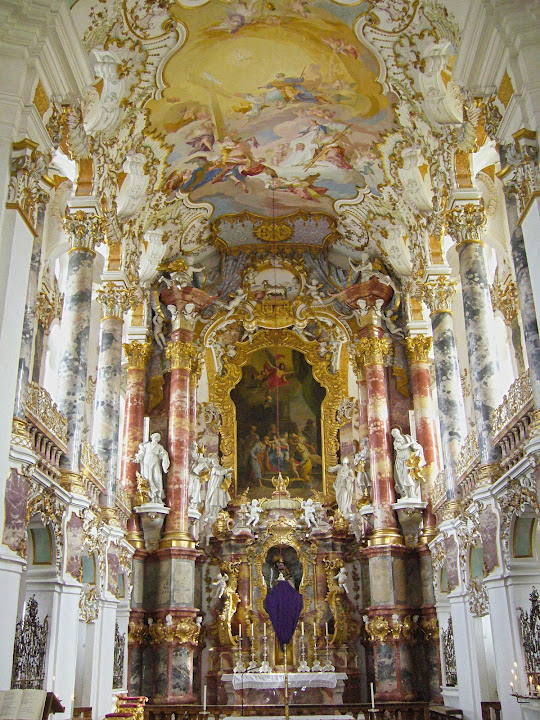 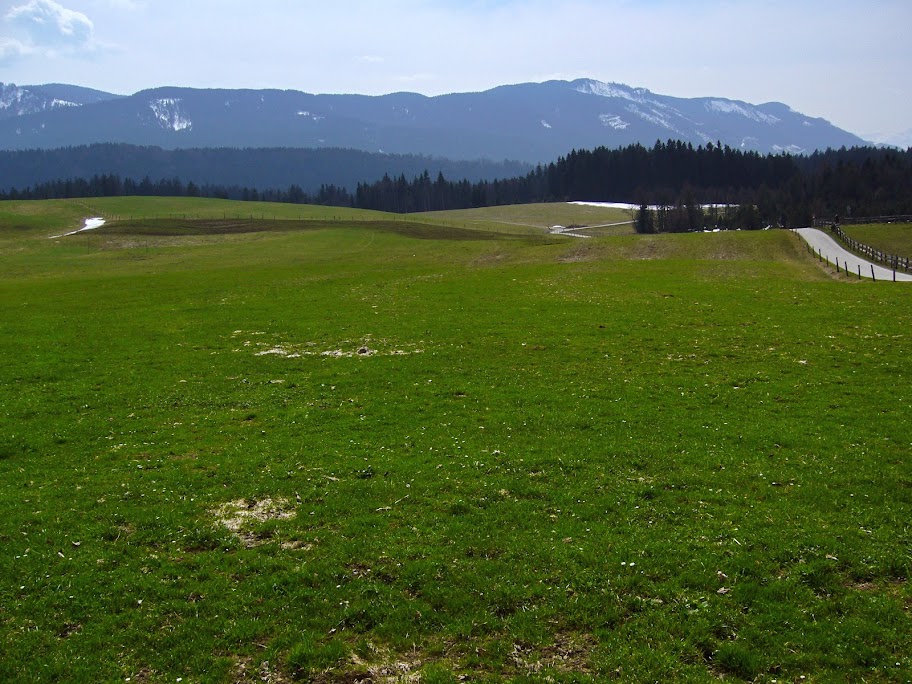 The meadow that gives the Wieskirche its nickname

Following that we stopped in Oberammergau, a town famous for its Passion Play, as well as its wood carvings and painted buildings. I was still worn out from our mountain experience, so I just explored the town briefly before sitting down with a radler at an outdoor cafe, relaxing, and enjoying the view:

We eventually arrived at our hotel in Innsbruck, Austria around 6pm. My room had a nice view of the alps:

View from my Innsbruck hotel room 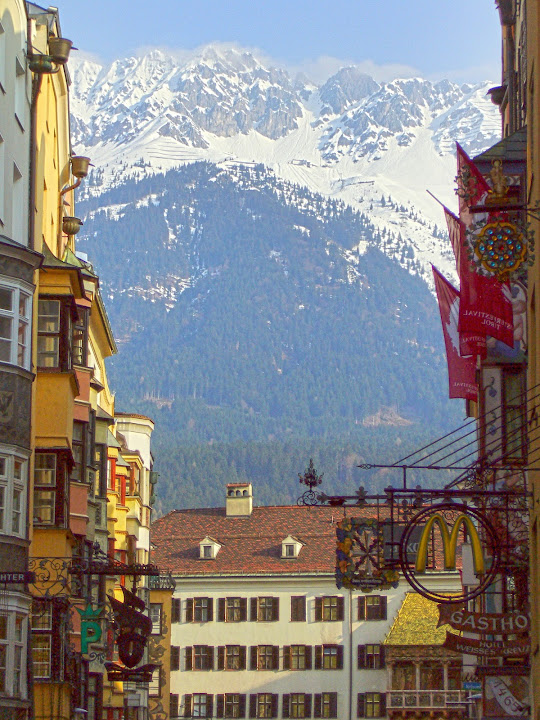 View from an Innsbruck street
(McDonald’s truly is everywhere)

After unpacking and eating a hotel-provided pork dinner, we went on a brief walking tour. The kids wanted to find a nightclub, so Uncle Kipp befriended a group of local kids and had them lead us to a bar. A few of the girls did not want to stay, so I led them home, which was fine with me because the smoke in the bar was disgusting. Everyone who stayed at the bar apparently had a great time, but as my uncle is fond of saying: “To each their own.” After a very long day, I slept like a log for most of the night.

The next morning we went on another brief walking tour, culminating in a visit to a church with cool statues:

After that I did a little shopping with Amber, as well as Sam and her grandmother. I picked up another t-shirt (which I would only get one use out of because it shrank to nearly a half-shirt after I washed it). This was the same store where I bought my nephew Jamie’s t-shirt, so I hope his fared better than mine did.

Amber and me trying on some hats

A little later I bought a small bottle of absinthe, just to see what all the fuss was about. Amber and I then walked down to the river, where we got some great photos: 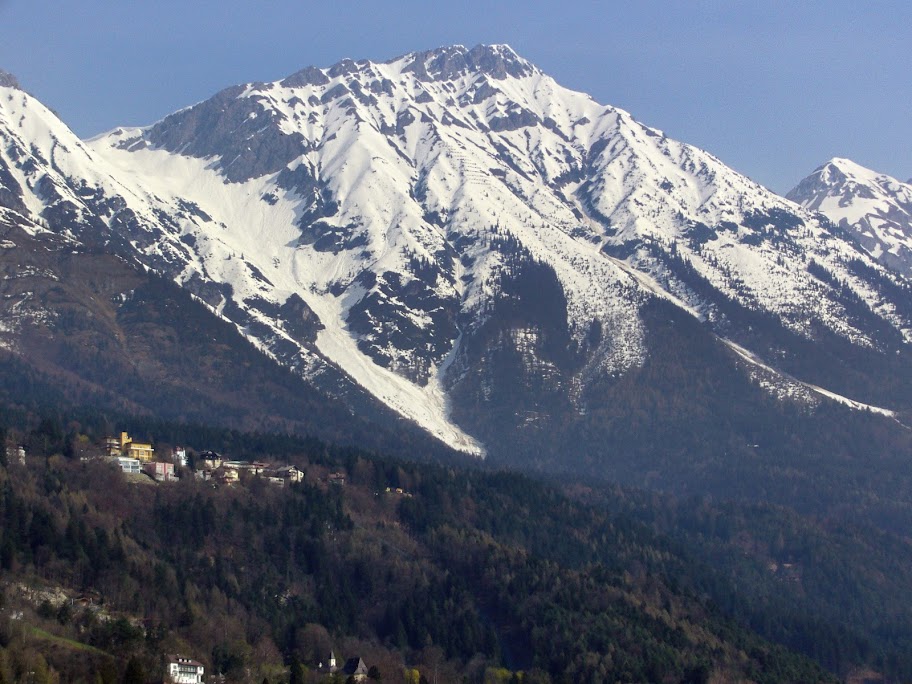 View of Alps from Innsbruck 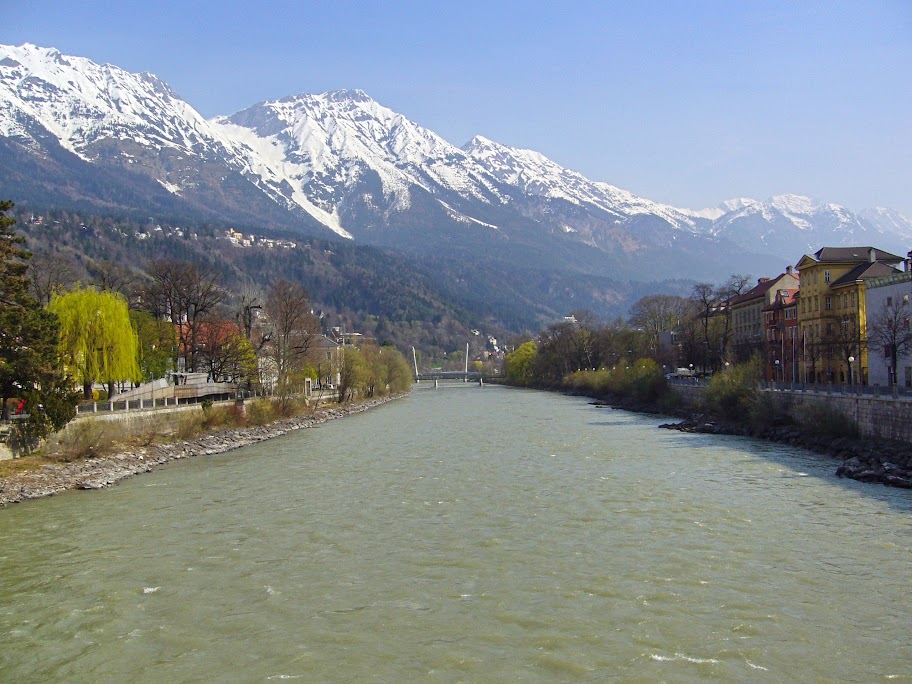 Alps over river in Innsbruck

We then ate lunch at an outdoor cafe where I had a good spaghetti bolognese (even though I was enjoying the German food, I couldn’t go a whole week without eating Italian :-)).

Following lunch we hopped on the bus for a very long drive to Switzerland, which will be covered in the next installment.