This is the second part of my Eurotrip 2009 Revisited series, a special edition of sorts in which I have divided the original post into smaller parts while incorporating minor copy edits and a few new (and reprocessed) images.

Soon after our adventures in Rothenburg we left for the bus ride to Munich. On the way we stopped at two more medieval towns that also had city walls like Rothenberg. Our first stop was Dinkelsburg, a charming town that looks like it jumped right out of the pages of a storybook. 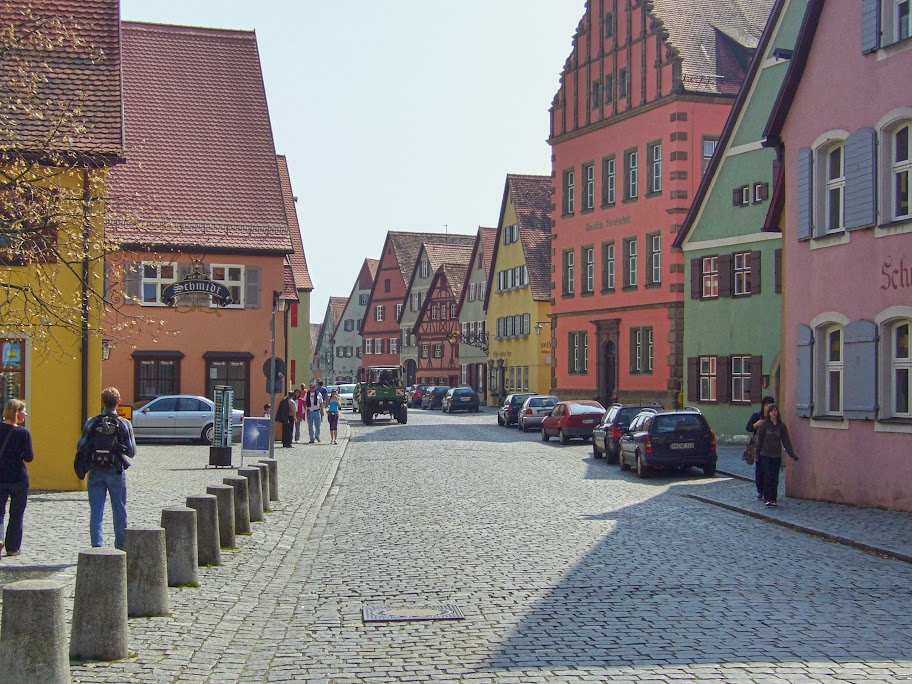 Our next stop was Nordlingen. For film buffs, this is the town that can be seen from the glass elevator at the end of Willy Wonka and the Chocolate Factory (most of the movie was actually filmed in Munich). I did not know this during the time I was there, though, or I might have taken more pictures (I didn’t snap many photos in this town because it looks so similar to Dinkelsburg and Rothenburg). 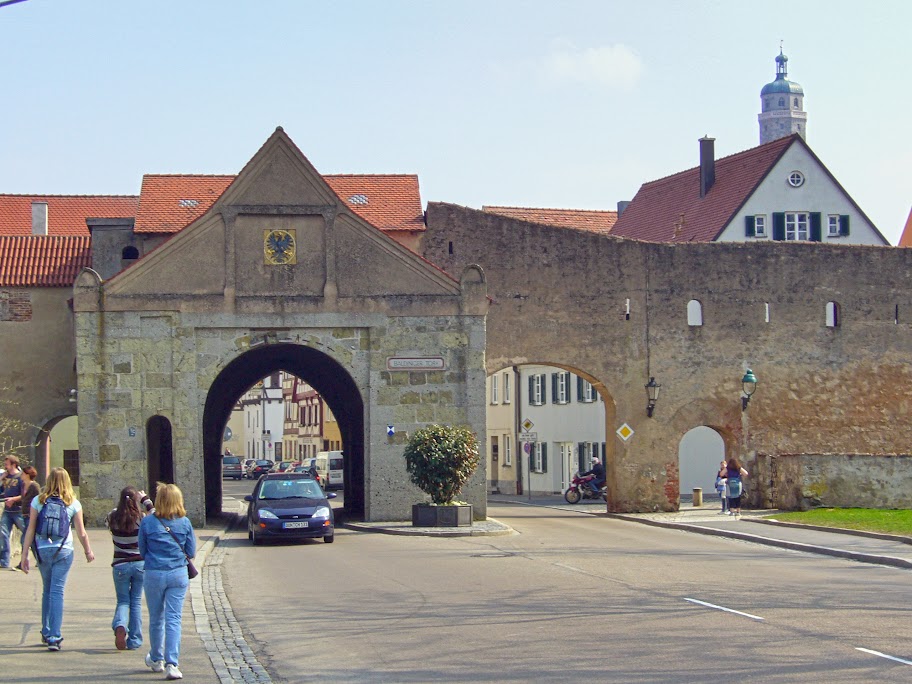 Later that day we arrived at our Munich hotel. The room card was needed to activate both the elevator and the electricity in my room, which I thought was an interesting feature. We had some free time to get settled in before leaving that night for the Augustiner restaurant. What was supposed to be a 15 minute walk turned out to be a half-hour walk, and by the time we got there people were starving (in retrospect, complaining about a 30-minute walk seems a bit silly in light of all the walking I did last year on the Inca Trail :-)).

Dinner began with a basket of pretzels (which you see more often in Munich than bread). The dinner was good, pork chops and spaetzle. I also ordered a radler (beer mixed with lemon soda). It’s a tasty alternative to beer and was my drink of choice for most of the trip.

On the way home that night we went to the Augustiner beer garden, where I had my first Mas beer of the week: a one-liter beer in a giant mug. Uncle Kipp had bought Amber her first beer earlier in the day (a radler), but she had not tried real beer yet, so I let her taste mine, to predictable results:

A couple of German guys (who we thought worked there) came over and talked a few people from our group into going up on stage to dance and sing. The kids who went up soon discovered the truth when a real employee yelled at them. Soon after we headed back to the hotel. Exhausted from a general lack of sleep over the first couple of days of the trip, I fell asleep pretty easily a little after midnight, though I woke up a couple of times during the night.

The next morning for breakfast I had some outstanding croissants with tasty European butter, as well as a good chocolate-frosted pound cake. That day we went on a bus tour of Munich with the same guide that we had two years ago. Our first stop was Nymphenburg Palace:

I snapped this quick photo of Nymphenburg Palace from the bus.
Gotta love Photoshop’s spot healing tool for getting rid of window reflections.

The gardens behind Nymphenburg palace

While inside, I briefly leaned against one of the pillars in the picture below to take a photo of the ceiling mural, which was a no-no. A little old lady came over to yell at me, then proceeded to follow me around for the rest of the tour. 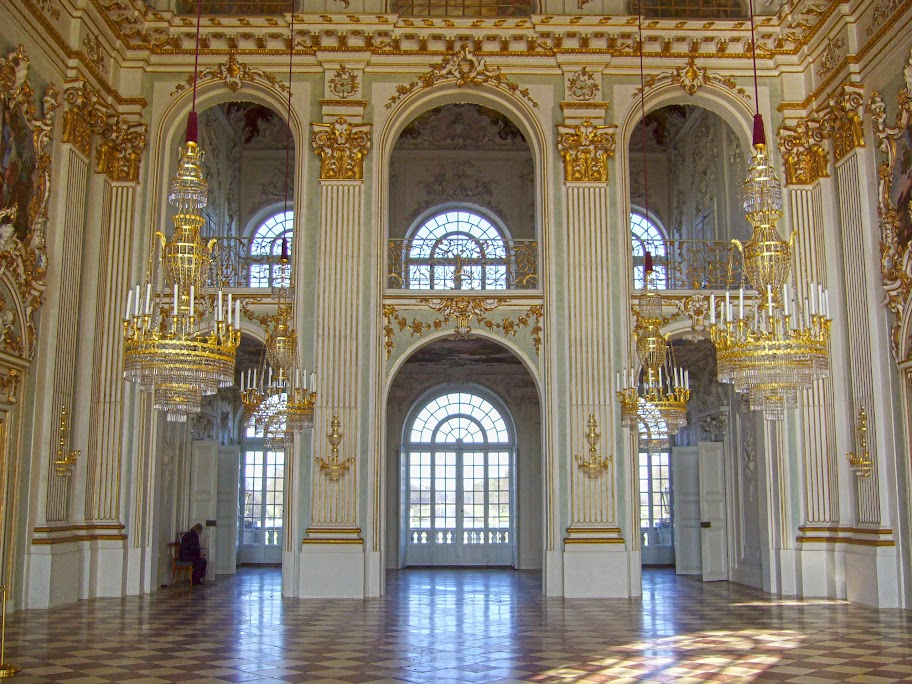 After finishing our tour of the palace, we hopped back on the bus and stopped by the Eisbach river to watch surfers ride the rough waters where the river forms a standing wave.

Surfer on the Eisbach in Munich

Our tour ended in the town square known as the Marienplatz, where we watched the Glockenspiel in action.

Glockenspiel with statue in foreground

Our group then split up and I bought Amber lunch for her birthday—we ate with Sam and her grandmother. Like the previous evening, we were supplied with a basket of pretzels. However, unlike the previous evening, they charged us for them—and neglected to mention this until after we had already eaten them. That was kind of annoying, but what are you going to do? These things happen when you travel. The lunch was good anyway: sausage and potato salad.

That afternoon I skipped the group excursion to the Dachau concentration camp since I had already seen it two years ago, choosing instead to walk to the famed English Garden (Munich’s version of Central Park). It’s a beautiful oasis in the middle of the city complete with mini waterfalls and babbling brooks.

Mini waterfall in the English Garden

Before going I bought a t-shirt (the first of many I would buy on this trip because the April weather was much warmer than I was expecting and I had mostly packed heavy clothes) and changed into the only pair of shorts I brought. By the time I got to the English Garden I realized it had taken me an hour to walk there, and it would take me another half hour to walk to the beer garden at the back of it. While in the park I discovered firsthand how much less prudish Europeans are than Americans when I saw a naked guy running around playing Frisbee with himself. There were tons of people there; including children, but nobody cared. It was certainly a jarring site for someone who grew up in a country that freaked out over a Super Bowl wardrobe malfunction.

I made my way to the back of the park, first stopping at a gazebo on a hill overlooking the entire park with the city line in the background:

I then continued on to the beer garden, at the center of which stands a large Chinese pagoda:

Chinese pagoda and beer garden in the English Garden

I sat down and drank a Radler and ate a giant donut type of pastry, soaking in the beautiful sunny day. I also took this time to call Jen at work. On my way out of the park I stopped and had a chocolate gelato (I was pigging out on this trip). A German man then asked me to take a picture of his family. We had a brief conversation, during which he sort of made fun of me for wearing an Oktoberfest shirt in the spring, but it was good-natured ribbing.

While walking back through the city, I saw an accident happen in front of me in which a motorcycle wiped out. The guy was okay; he had jumped off the bike. Interestingly, we had also seen a motorcycle accident on the trip two years ago.

When I got back to the hotel I stopped and spent a few minutes on the pay-per-minute internet computer to check email (this was back before I had a cell phone or kindle capable of keeping me connected abroad) . . . facebook was down so I couldn’t check that (perish the thought!). I then went to Uncle Kipp’s room and we chatted for a while only to realize that we had lost track of time and were late for the bus that was taking us to dinner. Everyone took turns being late on this trip, today was ours–and Amber now had some ammunition to fire back at Uncle Kipp. 😉

Dinner that night was roast chicken and fries, and once again we fell victim to the pretzel bait and switch, only this time it was more egregious because our dinners were supposed to be all inclusive except for drinks (the pretzels at the previous day’s dinner had been free). It wasn’t a big deal for me, but many of the students were there on limited budgets and were not expecting to have to pay money toward their dinners.

For dessert, Uncle Kipp gave Amber a very good birthday cake that our table shared. Later that night we went to the famed Hofbrauhaus for drinks.

Amber & me with Mas beers at the Hofbrauhaus

At one point during the evening I discovered that German women have no problem coming into the bathroom to clean while you are still using the facilities. Anyway, we got home that night a little after 11. We had a 6:15 wakeup call the next morning to leave for Innsbruck, Austria. Along the way we would be stopping at King Ludwig II’s fairy tale castle, Neuschwanstein, and a few other places. Those events will be covered in the next installment.