On my way out of Yosemite National Park I stopped for a hike through the Mariposa grove of giant sequoias (aka redwoods). They don’t grow as tall as the coastal redwoods, but they grow wider–some are so massive that their branches actually look like trees themselves. It’s impossible for any photo to do these behemoths justice, but the people in some of the shots below, and the fact that many of the large surrounding trees look like sticks next to the redwoods, help to provide a sense of scale.

I thought this was a redwood pine cone because of how enormous it is, but redwoods apparently have small cones, so I’m not sure what type of tree this belongs to. 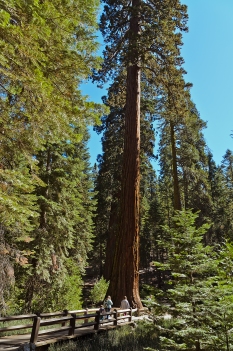 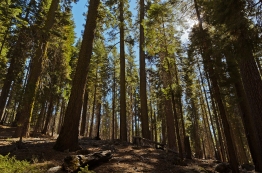 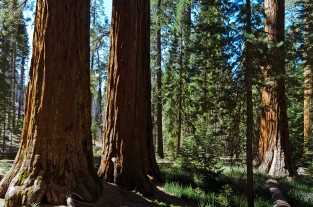 I just discovered that my previously posted Yosemite movie was banned by YouTube from being playable in almost every country in the world, including the United States. Apparently that’s what happens when you use Pink Floyd as your background music. Oh well, lesson learned; back to using classical music in all my videos.  This new version features “The Unanswered Question” by Charles Ives, though apparently even classical music occasionally runs up against the long arm of the copyright police–one of my previous videos using a Holst piece is banned in Germany.

Anyway, here again is the compilation of all videos taken during my two-day visit to Yosemite National Park back in October 2014.  You can view the HD version by selecting 1080p from the quality settings of the video.

Here are some panorama and HDR photos from my recent trip to Yosemite National Park in California. The tree pics are vertical panoramas taken in the Mariposa Grove of giant sequoias (redwoods), though it’s hard to get a sense of scale since most of these photos don’t have people in them. Click on any image to view a larger size.

After spending two weeks in Europe and a week in Cape May this year, I had basically used up all of my vacation time, so I never imagined I’d be hopping on a plane in a couple of weeks for my first ever trip to California (actually, it’s my first trip to anywhere in the U.S. west of North Carolina).

My boss had asked me earlier in the year if I was interested in attending a conference in San Francisco. I said yes, but wasn’t sure if it was actually going to happen. The trip finally got approved in mid-summer but we were so busy at work that we kept putting off making the arrangements. As the summer dragged on and all of the hotels got booked up, I had pretty much assumed it wasn’t going to happen. But in the end everything worked out and now I’m headed to the Golden State!

I decided to turn it into a mini-vacation by flying in two days before the conference and staying for three days after it. The big question was what to do with that extra time. I could have explored more of the city (I won’t even be able to scratch the surface of everything San Francisco has to offer) or I could have visited some of the surrounding areas like Napa Valley, but when I realized that Yosemite National Park is within a four-hour drive, my decision was made. There was no way I could pass up the chance to walk in the footsteps of Ansel Adams and gaze upon the beauty of Yosemite, so I booked a cabin for two nights in the park and reserved a rental car to drive out there after the conference. Yosemite should be spectacular decked out in the colors of autumn.

Meanwhile, the weekend before the conference I’m meeting up with my cousin who lives nearby for a planned drive along the Route 1 coast and up to see the redwoods, which will be awesome.

In between, I will be attending Dreamforce, a massive tech conference with well over 100,000 people expected to attend. It’s like the Comic Con of cloud computing. I will be staying near Fisherman’s Wharf and commuting to the Moscone Center for the conference. It should be quite an experience, though I’m not sure that I’m prepared for that type of human traffic congestion.

I will try to see as much of San Francisco as I can during my four days at the conference, though how much I’ll be able to accomplish each day after the conference lets out remains to be seen. If any San Francisco natives out there have advice on what I can do with my limited time, I’d be most grateful. I would like to try climbing at least one hill. I also want to walk through Chinatown and along the coast near Fisherman’s Wharf, and maybe visit Golden Gate Park. Any dining advice would also be appreciated (e.g., is In-N-Out Burger worth the hype or should I stick to finer dining establishments?). Thanks!

I’d also be grateful for Yosemite tips, and I’m curious if there are any places worth visiting between Yosemite and San Francisco since I have a late night flight home and can take my time driving back. Perhaps one of the Gold Rush towns?

I’m very excited about this unexpected journey. It’s hard to believe I’ll be flying for the third time in a year. I’m becoming a regular jet setter. 🙂