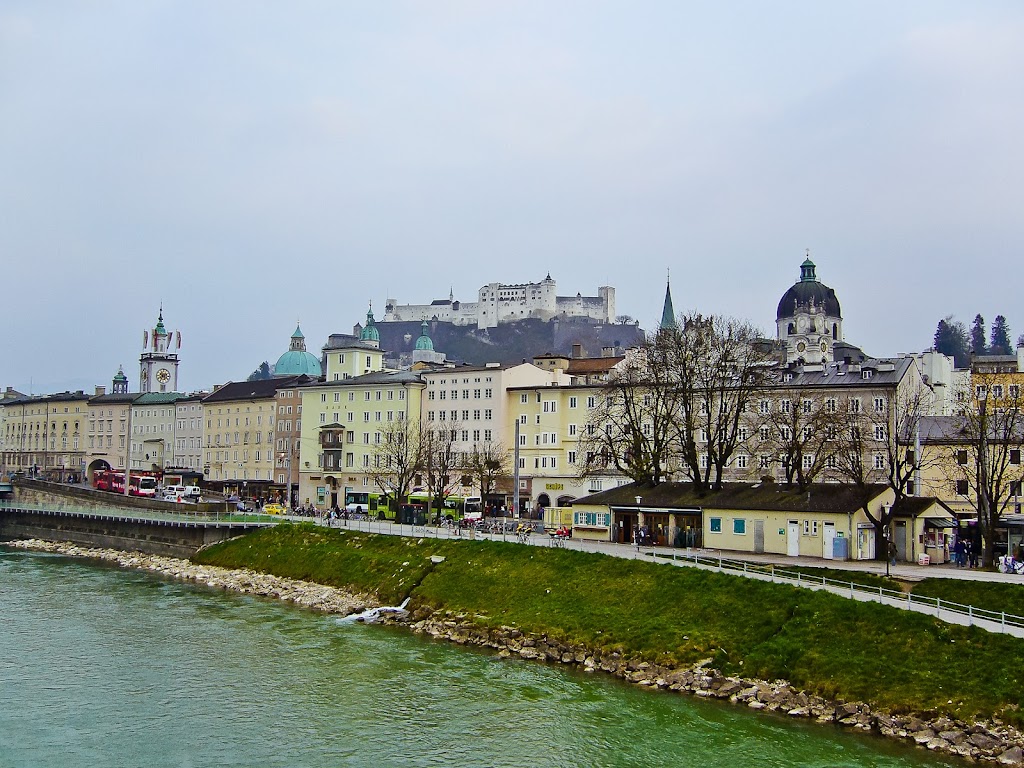 Salzburg
My original title for this post was “The Hills Are Alive in Salzburg,” but then I realized that a fellow blogger recently used almost the exact same title, and I didn’t want it to seem like I was copying. 😉

April 4th to April 5th, 2007: It was time to leave Vienna and head to Salzburg, passing through more gorgeous Austrian countryside. Along the way we caught a glimpse of Melk Abbey, one of the world’s most famous monasteries, over 900 years old and still functioning as an abbey and school. Unfortunately we didn’t have time to stop and check out this impressive site, so I had to settle for a photo snapped from the moving bus.

Eventually we reached Salzburg and I got my first glimpse of the spectacular fortress that overlooks and dominates the city landscape. 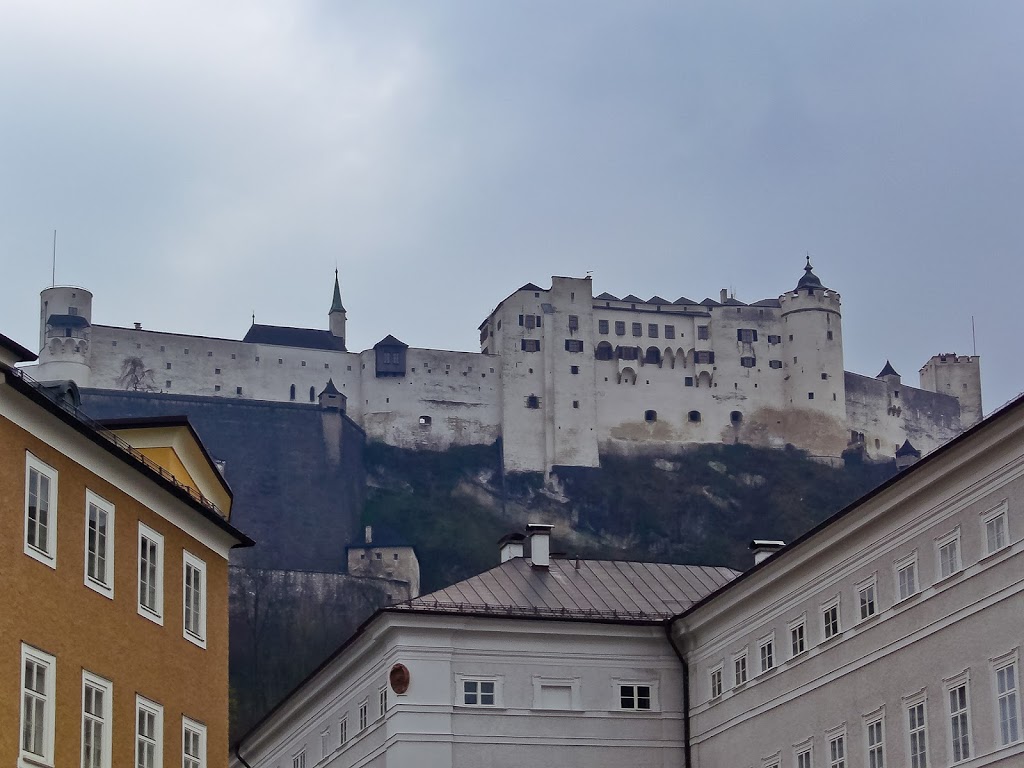 Hohensalzburg fortress, one of the largest and best preserved medieval castles in Europe.

After checking into our hotel we went on a guided walking tour. I quickly fell in love with Salzburg. It was not only my favorite city on this trip, but possibly my favorite that I’ve ever visited. Salzburg doesn’t feel at all like a city, there’s not a tall building in sight. Featuring cobblestone pedestrian streets lined with historical buildings fronted with iron signs, it’s like a walk back in time. I could have spent an entire week here. 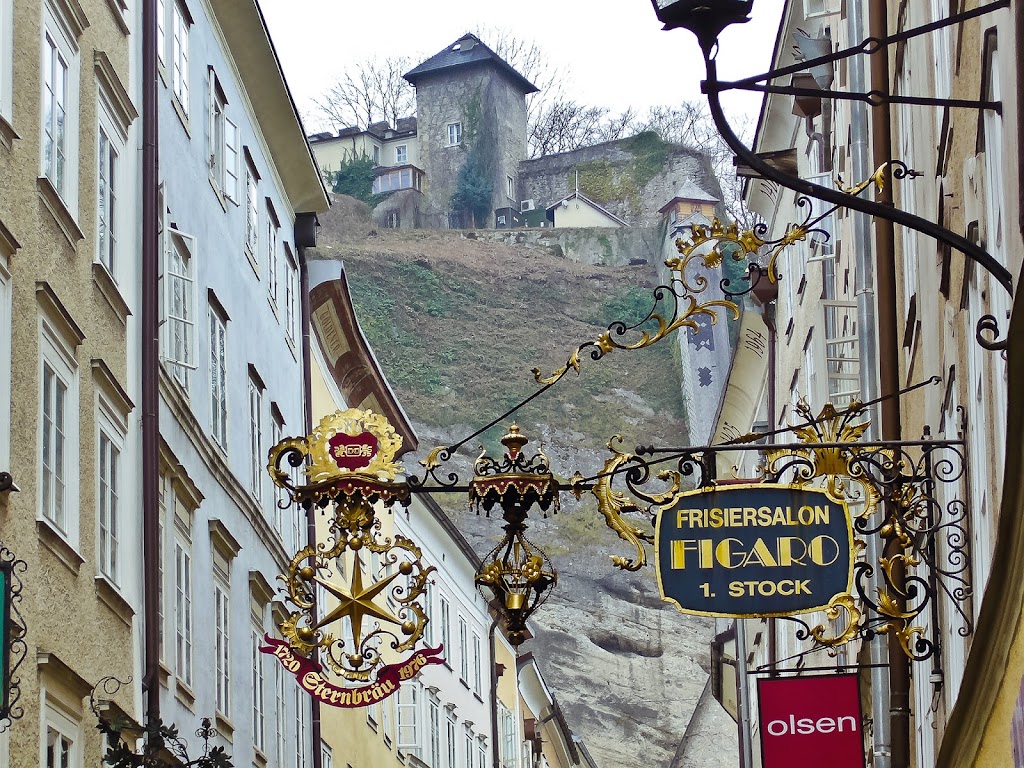 View from a pedestrian street. 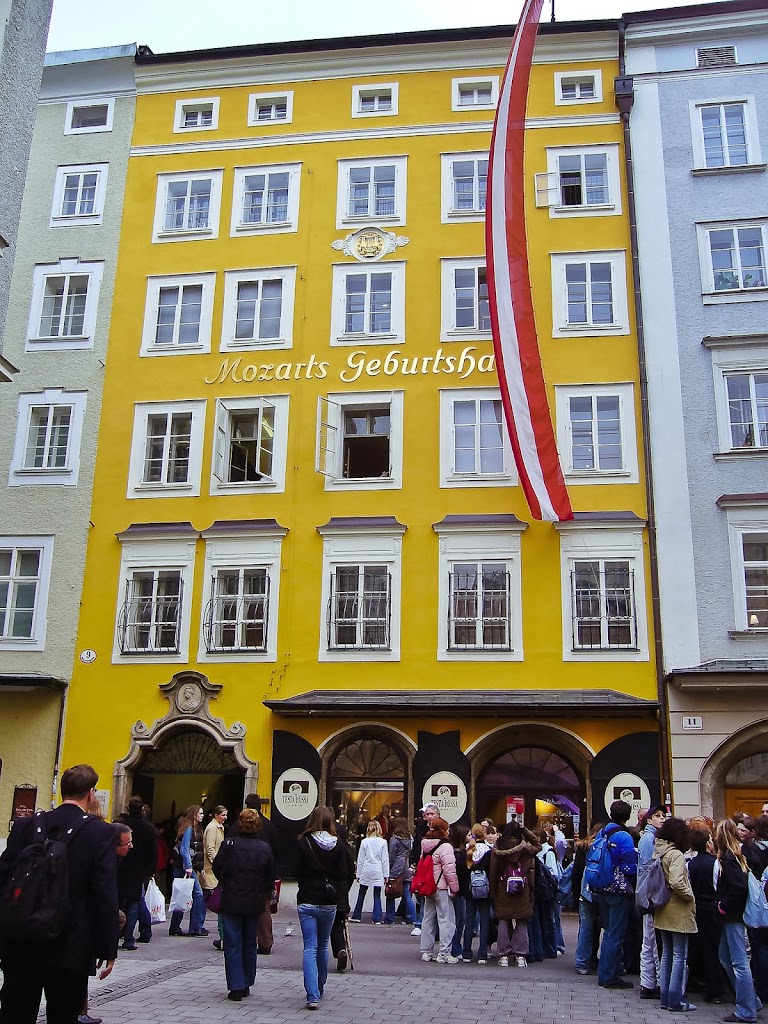 Mozart’s birthplace. The museum inside is very touristy.

The Salzach River runs right through the middle of the city, with pedestrian bridges crossing it.

I was particularly fascinated with the fortress, taking many photos from many angles. Here are a few: 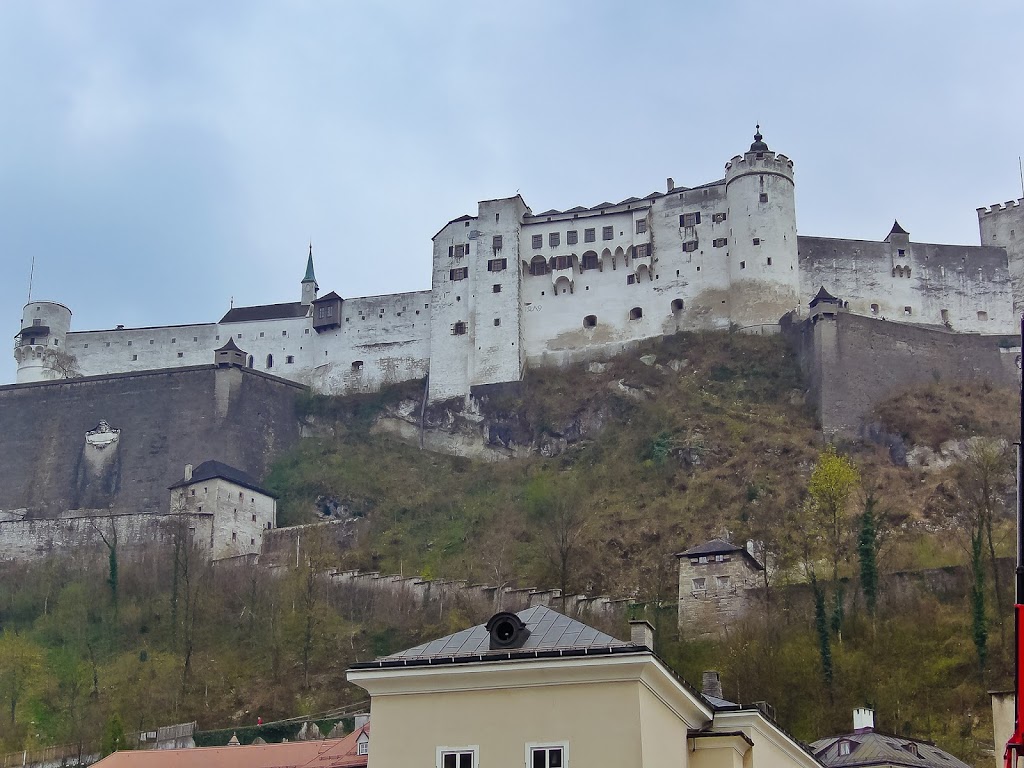 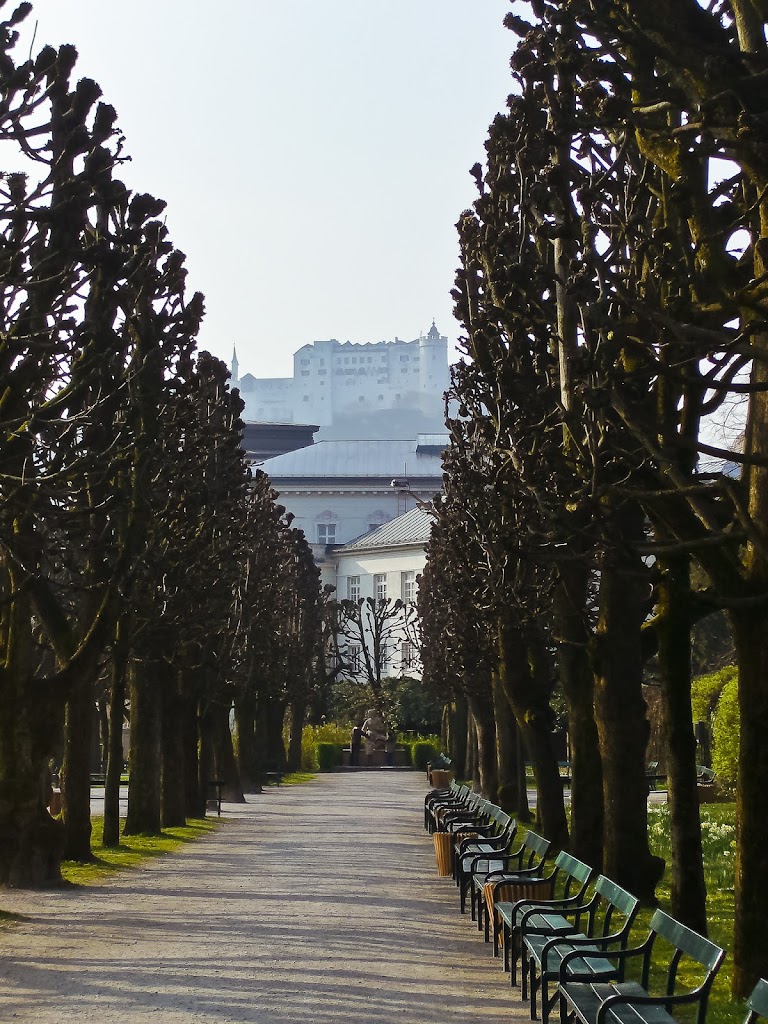 Seeing the fortress for the trees… 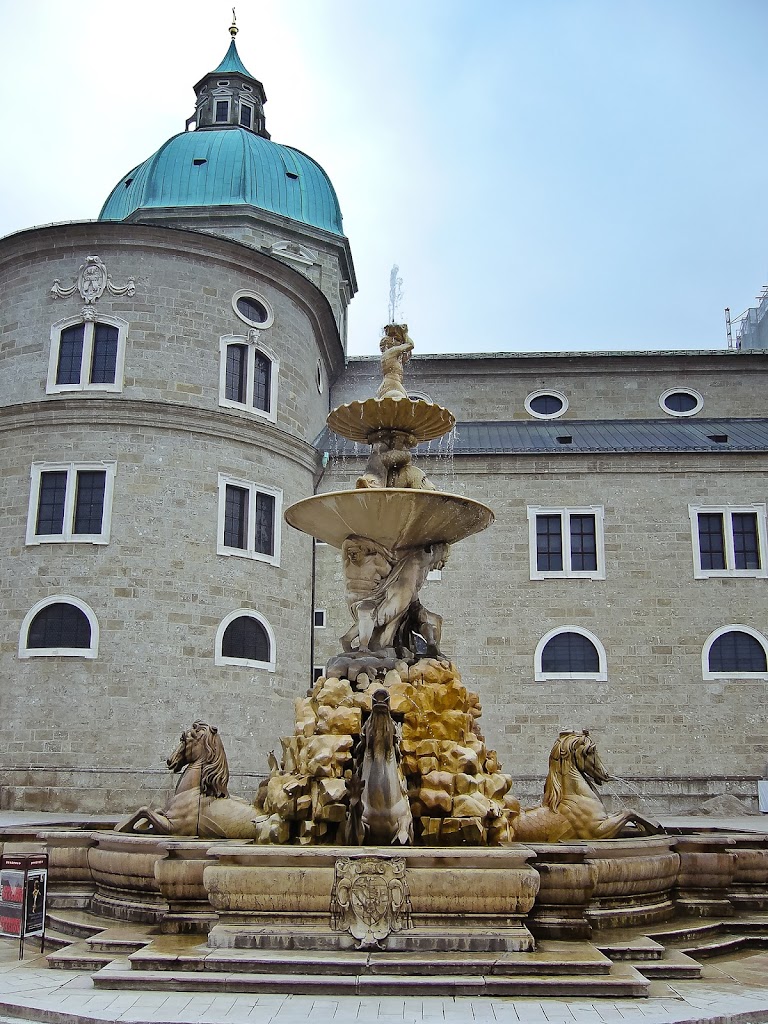 The Mirabell Gardens archway featured in the film.

St. Peter’s Cemetery, where the Von Trapps hid from the Nazis,
though the actual scene was filmed in Hollywood.

After our guided tour we had free time before dinner. I went off by myself and ended up in the main square in the shadow of the fortress, where I spotted some men playing on a giant chess board (I saw several of these giant boards in Lucerne as well).

The man moving the knight in this photo would later be my opponent.

I watched a couple of games and then decided to challenge the winner of the most recent game. We didn’t speak each other’s language, but the language of chess is universal. I did very well early on—I went up a knight pretty quickly and appeared on my way to a win, but then I blundered back a knight and ended up losing a close match. Despite my disappointing loss, it remains a fond memory—how often do you get to play jumbo chess in Europe while gazing up at a magnificent castle?

After the game I made my way back to the hotel for dinner. The helpings of schnitzel were very generous—I guess they knew they were serving Americans. 🙂

That night we went to the Augustiner Brewery, which was founded by Augustinian monks in 1621. The beer crafted here is still based on their methods, and those monks knew what they were doing. The beer was maybe the best I’ve ever had anywhere; it went down so smoothly. 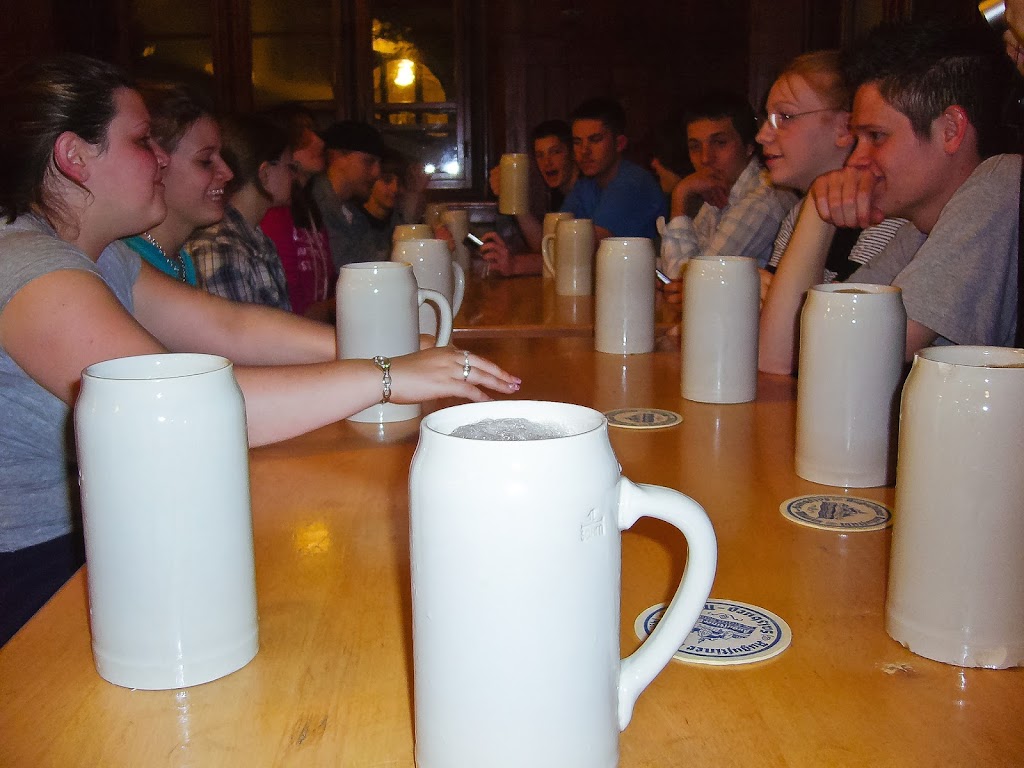 I thought these were cool mugs.

The next morning we went on another walking tour. 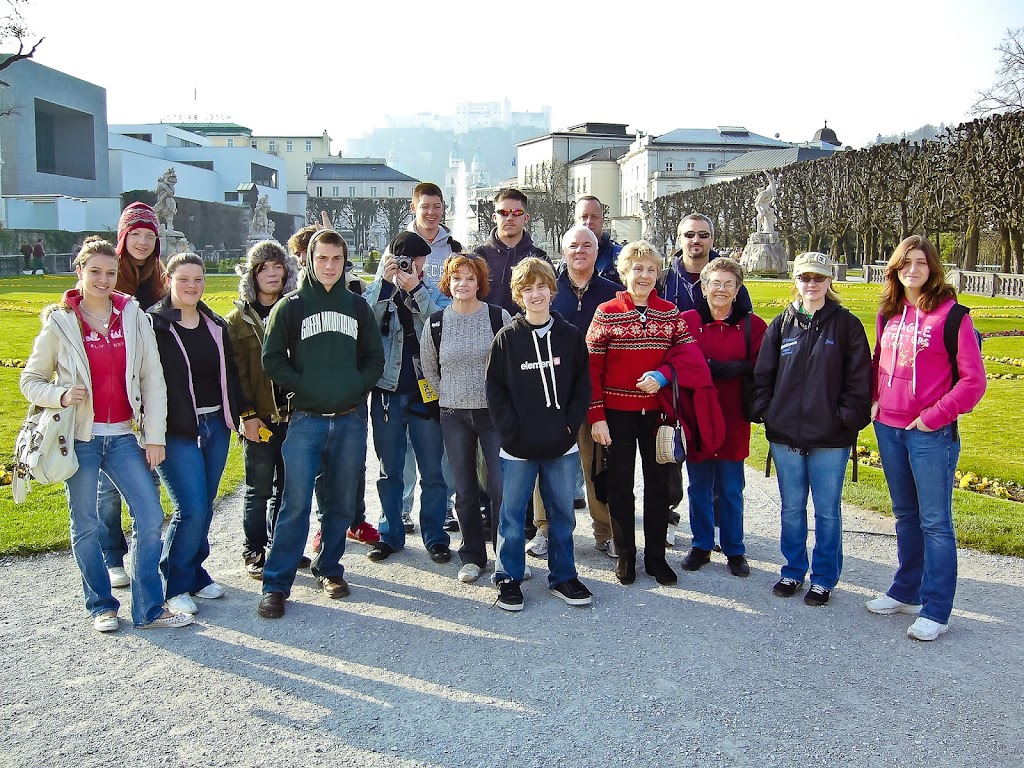 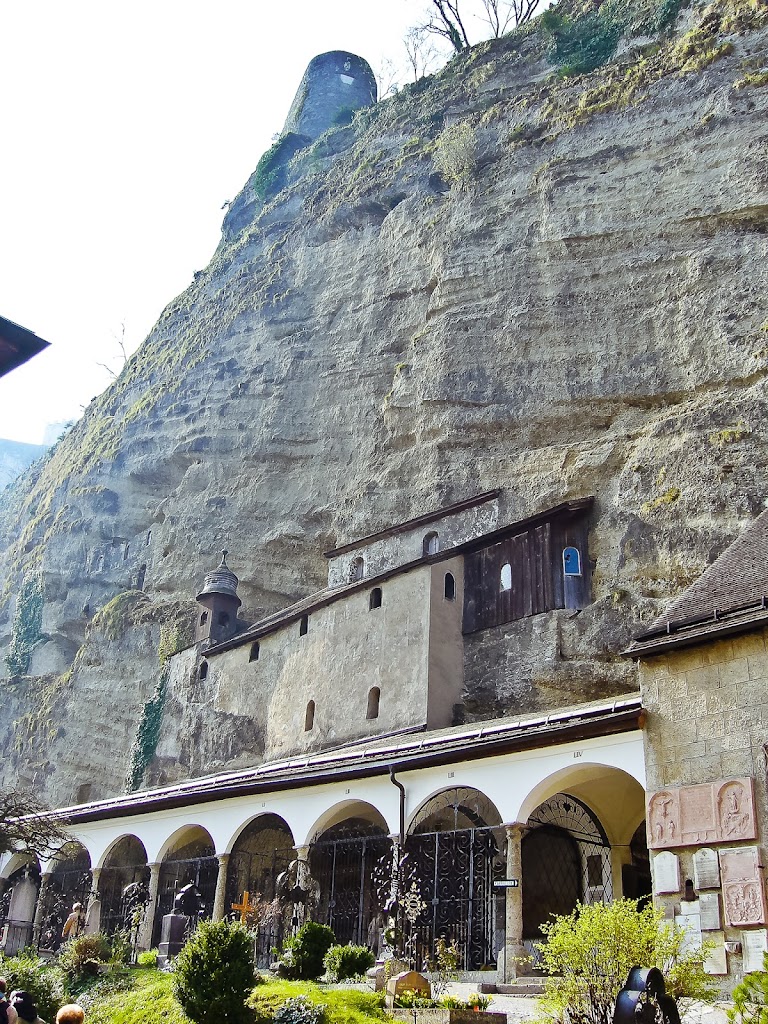 This monastery is built into the side of the mountain.

Closeup of the monastery catacomb windows carved into the rock.

After the tour we split into smaller groups. Some of us decided to go up to the fortress. There is a steep walking path to the top if you prefer to hike, but we opted to ride the funicular since we only had a couple of hours to spare (you could easily spend an entire day exploring everything the fortress has to offer). I was surprised at the speed of the funicular cars; they travel up the track much faster than you would expect at first glance. 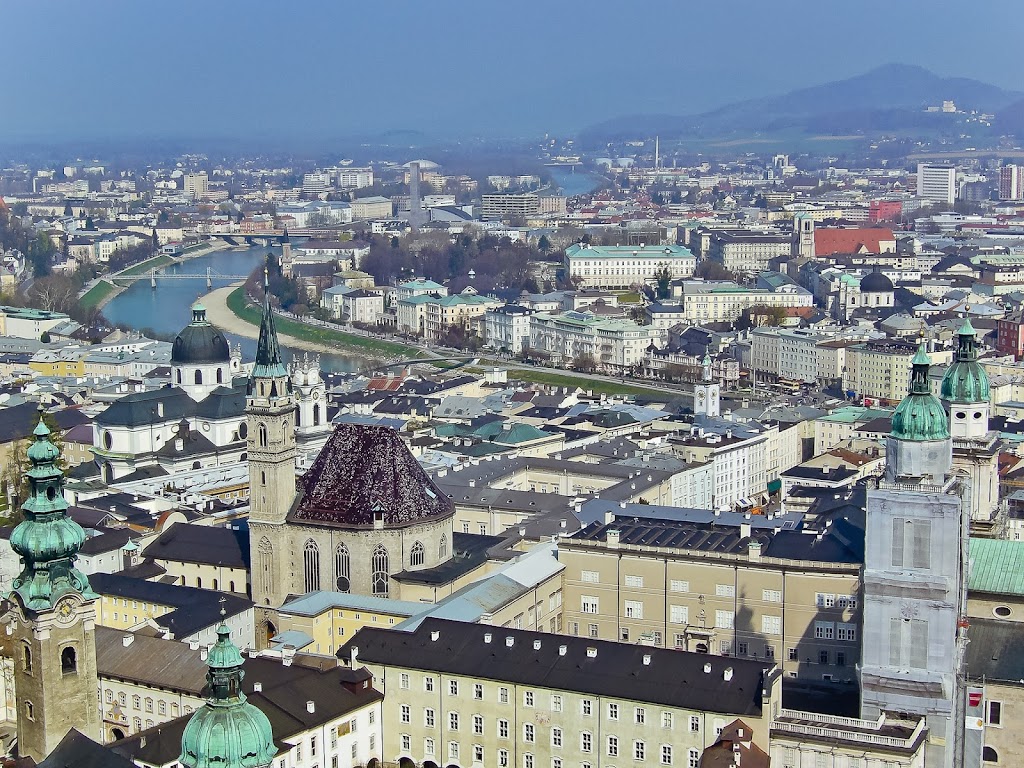 View of Salzburg from the fortress.

View of the square below. In a neat coincidence, the marching band down there was from New Jersey. 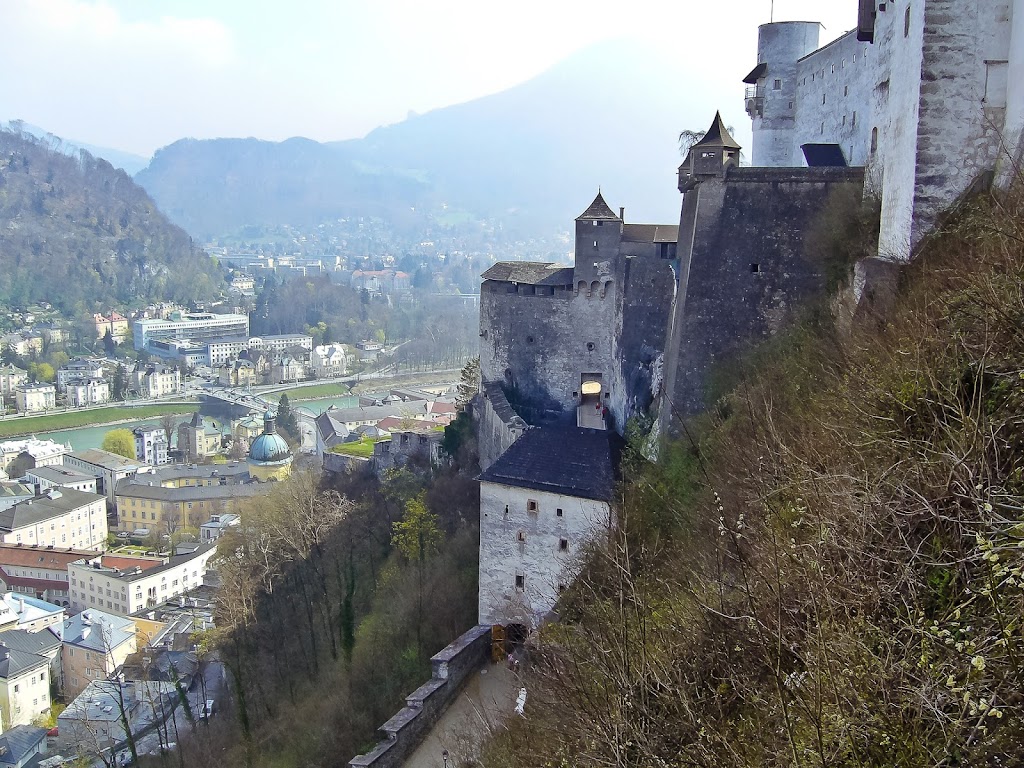 Side view of the fortress overlooking the city below.

Salzburg through the eyes of a cannon. 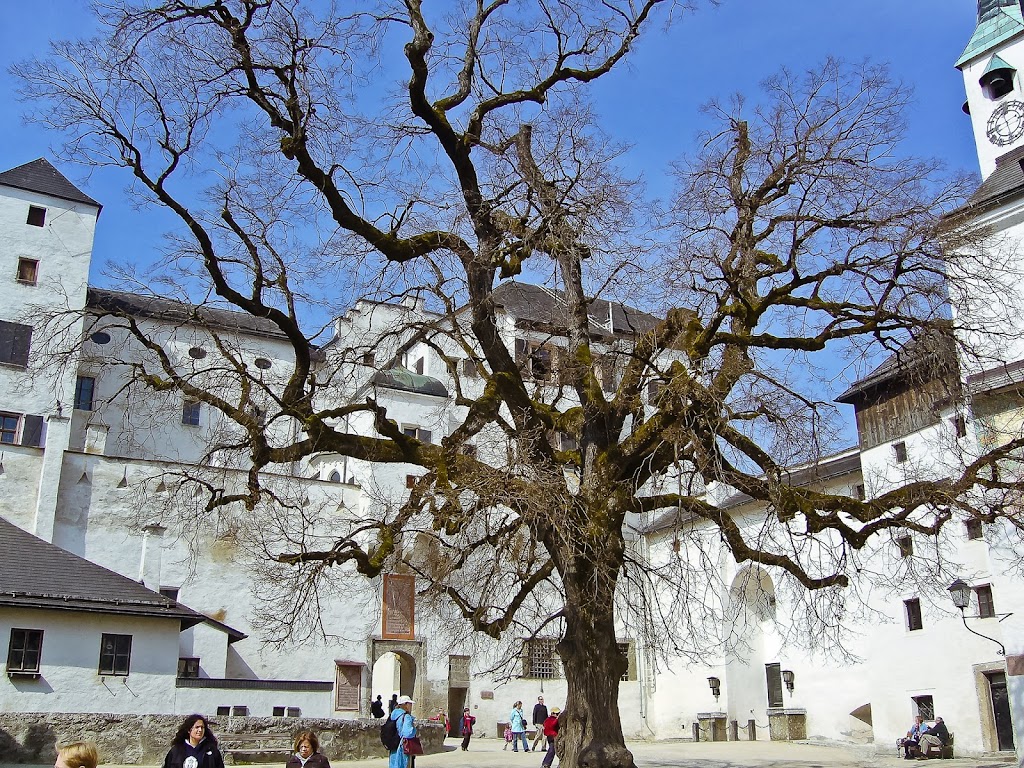 Although this tree in the middle of the castle courtyard wasn’t white,
my first thought when seeing it was of the Minas Tirith white tree in Lord of the Rings.

Before heading back down we had lunch at an outdoor restaurant overlooking the valley below. Unfortunately the Alps were shrouded in haze, so we could barely make out their majesty. I imagine the view must be phenomenal on a clear day. All in all, our visit to the fortress was the highlight of our stay in Salzburg. The rest of the group members who chose not to accompany us really missed out. 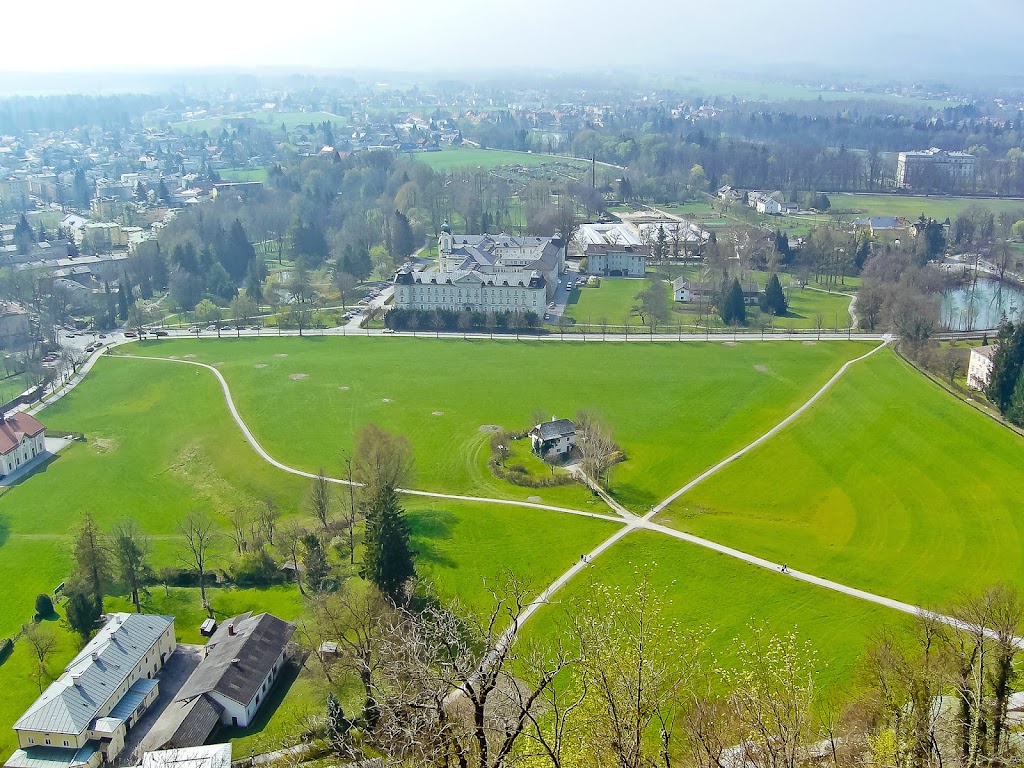 View from the restaurant.

Back down in the square it was time to leave for the salt mines, but we had about 20 minutes to kill, so I played another quick game of chess with a native Austrian, this time with everyone in the group watching. Since I had to rush through the game, I wound up getting my butt kicked. The Austrian who defeated me was very nice, though, even posing with me for a picture afterward. My uncle has that photo somewhere.

The bus then picked us up and we were off to the salt mines. It’s a pretty neat tour: part walking, part mine car ride, and part boat ride.

Uncle Kipp and me (everyone had to put on these outfits before entering).

One really fun part of the tour is sliding down the optional big slides to the lower parts of the mine. You ride down with a partner. Several of the students went multiple times. 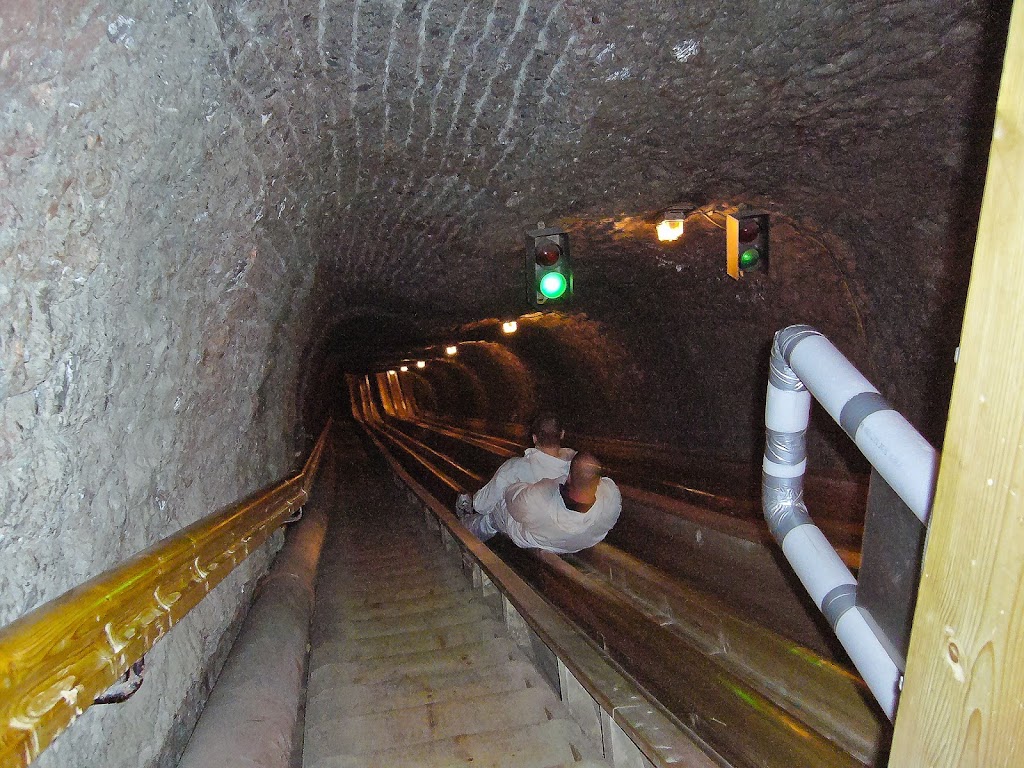 One of the slides.

After exiting we toured a replica Celtic village at the top of the salt mine mountain. From here we had a nice view of the valley below

A view from the top of the salt mine.

With that, our stay in Salzburg was near an end. In the morning we would depart for Lucerne, Switzerland, with a stop at Neuschwanstein along the way, which will be covered in the next installment. Until then, I leave you with a shot of the fortress at night.

2 comments on “My First Eurotrip, Part 4: Von Trappin’ in Salzburg”