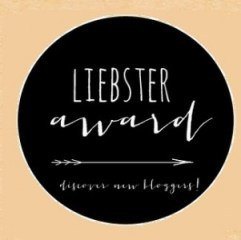 I have been nominated for the Liebster award! It’s always nice to be recognized by my fellow bloggers in the community.

The aim of the Liebster award is to get smaller blogs with less than 200 followers a bit of recognition, share some love and spread the word. There are some rules to follow though. You’ve got to play the game!

• You then need to write 11 random facts about yourself

• One good turn deserves another, meaning, you then need to find 11 other bloggers with less than 200 followers who you think are deserving of the award so that you can then nominate them! In other words, keep the love going and help small, new blogs get out there and get noticed!

• Finally, the award presenter will ask 11 questions of you which you need to answer and then you, in turn, ask your nominees 11 questions, and so it goes.

First, I would like to thank willc88 for nominating me for this award. I am always honored when someone takes the time to give my blog a shout-out, it encourages me to keep going. I look forward to reading more of his fascinating posts about life in Mexico City as my visit draws nearer. Please check his blog out here.

1. I’ve visited several countries around the world but in my own country I’ve barely left the East Coast. In fact, the farthest west I’ve ever traveled is Fontana Dam in North Carolina, and since NC is on the East Coast, that’s not very far at all. This is something I’m hoping to remedy in the coming years with a cross-country drive out to Yellowstone.

2. I play the saxophone. Actually, I played until I graduated high school and then never picked it up again until my 40th birthday when I received a new sax as a gift. Playing again was like riding a bike, and I quickly joined a community band for about two years. I’m currently on hiatus from playing, but hoping to pick it up again soon.

4. I celebrated my 36th birthday in Munich, Germany.

5. I still have virtually every poster I’ve had since I was a kid, and most of them are hanging in my office, a room my wife calls Man World. The oldest poster is from the 1976 version of King Kong.

6. I wrote my first story in 2nd grade (I was about six years old), a haunted house collaboration with two classmates.

7. I’ve had the same best friend since I was five years old.

8. I once nearly drowned in a lake when I was very young. I was rescued by a friend’s father.

9. I love to cook. My specialties are Italian and Mexican dishes, as well as Asian stir fry. I also enjoy making creative meals out of whatever happens to be in the kitchen.

11. I’m a TV and movie junkie. There are four DVRs in my house capable of recording a total of 11 programs at one time that can be watched in any room in the house.

Alas, most of the blogs I follow either already have over 200 followers or have already won the Liebster award, so this list is going to be quite short. I will try to add more blogs to this list over time (I have a folder full of links to over 200 blogs I’m planning to visit as time permits).

And the questions I must answer….

1. If you could live the life of anybody in the world for a day, who would it be any why?

An astronaut, because outer space is the one place I’ll never have a realistic chance of seeing in my life.

I gave up soda years ago, but I’m pretty much addicted to iced tea.

3. What is the worst thing you’ve ever eaten?

I’m not a very adventurous eater, so I don’t try too many new things. But there was this one dish I ordered when our group stopped at a restaurant in a rest stop in Germany. It was a rice dish but it had tons of mushrooms (which I didn’t realize when I ordered it) and it was awful.

4. If you were to go and live in another country, where would it be?

That’s a tough choice, Italy or Germany would be great, but I think the country I’m most drawn to is Switzerland.

5. If you had to give up one for the rest of your life, would it be beer or meat (pasta if you’re veggie)?

That’s easy: beer. I can’t live without bacon but I could live without beer, especially since I prefer something like prosecco anyway.

To be able to stay home, write, and earn a living off my writing.

7. If you could only ever listen to one album again what would it be?

I was going to cheat and say Pink Floyd’s Discovery box set, but I’ll go with Dark Side of the Moon, though Springsteen’s Born to Run also deserves strong consideration.

I’ve been blogging on and off for years and for many different reasons, but mostly because I just love to write. The primary features of my blog, travel stories and photos, evolved organically with the increased traveling I’ve done in recent years. Ultimately, my hope is to build an audience for my writing as I continue to seek an agent/publisher for my novel. To that end I also feature creative writing samples, but the main focus will still be travel and photography.

I think head and body of a person would be much more desirable than a fish head.

I hate when people don’t take the extra two seconds to park straight and between the lines. I also get annoyed when groups of people don’t go single file when approaching you in a hallway or a sidewalk, forcing you to squeeze by them.

11. What was the last thing to make you laugh?

And now for my questions:

I really struggled to come up with 11 questions. I tried to stick mostly with a travel theme, but I threw a few others in there as well. The first three questions I stole from the ones I answered above because I thought they were good questions to ask.